With the Golden Globes last night, we’re officially in awards season mode. Queens Tina and Amy made their third and final appearance as hosts, our love for Amal ‘The dress is Dior Couture by the gloves are my own’ Clooney grew even more, and for some reason, the tears were flowing so much that you’d think we had watched the last 8 hours of Titanic during the show.

That being said, the Globes came and went as fast as Leo DiCaprio’s model girlfriends, and with the 2015 ceremony behind us, we’re picking our hits and misses on the red carpet. Are your faves on the list?

The dress was vintage Dior. The gloves were her own. She accessorized with a Je Suis Charlie pin. You win the night, Amal. I appreciate an understated look with one fashion risk tossed in, erring on the side of classy risk (gloves) not tacky (crotch-high slits).

So, I’ve never thought to myself “Kate Beckinsale: fashion icon” – more like “Kate Beckinsale: which one is she?” because I always have to think about who she is vs. Kate Bosworth. But Beckinsale keeps nailing it on the red carpet, so I have a feeling I’ll be a lot better at remembering which one she is in the future. This is the rare gown that – if you click through to the source – actually looks better on her than it did on the runway, with the neckline altered to be slightly less plunging. I love the dark nails, clean makeup, and after several years of tousled waves on the red carpet, even the tidy updo is refreshing.

I was about to write this off as too bridal at first. But honestly, brides WISH they could look this good. This is how a fairly simple design concept can look amazing: perfect tailoring, an interesting brocade fabric, and accessories – it wouldn’t work without that belt. If I could change anything, I’d ditch the bridal-white clutch and swap the dainty silver bangle for a thinner, more solid bracelet.

Usually sequins and feathers would get a big “no, not really” from me. But leave it to the preferred designer of Audrey Hepburn to nail it with a minimalist neckline and bodice and silvery ombre.

Okay, boys. THIS is how you do non-black Black Tie. In a decade’s time, these ’50s-influenced, slim-cut tuxedos are going to look so 2010s. I don’t even care. I’m so over those schlumpy, baggy tuxedo pants that look like they could be concealing a diaper.

Honorable Mention: Quvenzhane Wallis in Armani – that little munchkin is dressed exactly how an 11-year-old nominated for her performance in Annie should be. And Tina Fey’s tuxedo, because good Lord, that wasn’t even fair.

Golden Globe Awards? More like SILVER Globe Awards, amirite?? Diane was just one of the many stars wearing a shimmery silver last night, including Julianne Moore, Reese Witherspoon, Jennifer Lopez, Dakota Johnson, etc. etc. But I think Diane wore it best – it’s not too outlandish like JLo’s, but it’s also not as simple as Reese’s. There’s more too it than just a gown. It has depth and lines – but let’s be real, if anyone else wore this, it wouldn’t look as good.

She may not have walked away with an award last night, but Emily is certainly on the top of a lot of best dressed lists today. She looks like a goddess (said in my head with a British accent like ‘god-DESS’) in this flowing white gown. She paired it perfectly with the pop of color with her bracelet and earrings and a perfect braid atop her head. Flawless.

Being a model, Chrissy has a penchant for hitting her red carpet look out of the park, and this was no exception. I feel like in person, this baby pink lace dress is even more impressive, and that makes me love it even more. And although John Legend won last night, Chrissy of course made her mark by getting caught making this face, and within minutes she was an internet meme. God bless.

As I’m typing this I just realized I also chose Taylor for one of my Best Dressed at the Emmys last year, so I guess she’s killing it on the red carpet as of late? Any type of gown that flares out like that reminds me of a classing Hollywood style, which is perfect for this event. It’s simple yet sexy, and if only she had changed her makeup a little, this would’ve been the perfect look.

Boy, do I enjoy a good pantsuit. I love when ladies say ‘screw traditional women’s fashion – i’m gonna wear pants!’. (BTW best dressed not on my list includes Tina Fey in that tux that made me question my sexuality for a second). Anyways, Emma is the type of gal who can make this look classy yet fun, and that sash – THAT SASH is the perfect accessory. Also, pockets. What girl doesn’t love pockets?!

This shape and color is perfect for the erstwhile Josephine Potter. So what’s the problem? Easy: that it’s one of those fabrics that creases in a not-so-attractive way when you wear it. I really feel for Katie Holmes here – how many of us have been there with something that looks awesome when you try it on, and becomes a wrinkly mess after 10 minutes of sitting and moving around?

This is a dress worth breaking our usual taboo over having too much overlap on our lists. It’s like part Delia*s, part prom dress from The Virgin Suicides, part Wendy Darling’s nightgown. Hey, at least she tried something?

Conchita Wurst’s fame hasn’t really reached U.S. shores yet, but I’m feeling pretty “you do you” about the beard. The internet might have room for fashion police, but not gender binary police. I just don’t like how the dress reminds me of a Halloween costume for Hot Rose Dewitt Bukater. There’s also some poor timing going on – it reminds me of that much-maligned green dress that took Twitter by storm last week.

This cut makes her look weirdly bottom-heavy.  If you erase everything from a few inches above the knee on down the dress looks great, so there’s something screwy about how the mermaid effect was tailored.

What even is this?

Looks like Lana’s living out of the waters, probably gonna go spend a day warm on the sand. Thingamabobs? She’s got twenty.

I’m all for a cape but Jemima, who has always been known for her eccentric fashion style, looks like she was dressing up to be Queen Elsa for her kids and found some fabric leftover from 1989 to throw on as a top. Also, she looks exactly like Selina Meyers’ daughter Katherine in Veep, no?

Jill Soloway in this suit 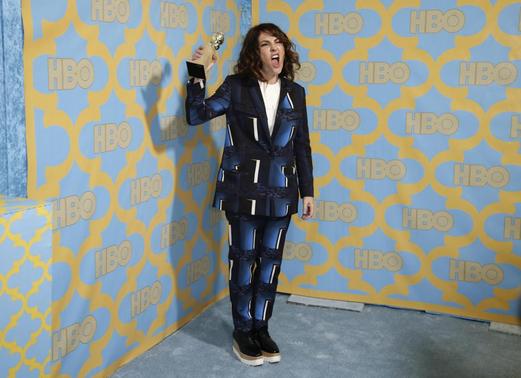 Props to Transparent creator Jill for rockin this suit, but I feel like I’ve zoomed into a Magic Eye book.

I think Katie Cassidy thought she was going to prom last night… but prom in like 2002.

I’ve never been pregnant, but I imagine picking a dress for a high-profile event like the Golden Globes could be particularly daunting. But Kiera’s always been a fashion forward-type gal, so one would assume her style tastes wouldn’t change once she got preggo. Unfortch, that didn’t happen. She looks like a tablecloth from a grandma’s summer home up in the Adirondacks. And I just noticed the huge butterfly bracelet. Ring? Purse? In the words of Miley, ‘Butterfly fly away’.