On January 20th 2006, High School Musical was released to the delight of millions of tweens and also some 19-year olds (us, at the time). It’s hard to believe that it’s been 10 years, but we’re all in this together. A whole decade has passed since back when there was me and you, watching a musical Disney Channel Original Movie that we were far too old for. I didn’t see HSM until several months after it came out because I was studying abroad that semester, but when I came home and spent the summer working with elementary school kids who wouldn’t stop talking about it, I realized that Zac Efron, Vanessa Hudgens and the gang were just what I’ve been looking for. (By the way: those elementary school kids I was old enough to be in charge of must be in their late teens to early 20s now; yikes; ouch).

This post is not the start of something new. Rather than breaking free from our typical format, we have chosen to stick to the status quo. Here’s a live blog of my tenth-anniversary rewatch of High School Musical, so queue it up on Netflix and getch’a head in the game, because we’re about to bop to the top.

1:00 Character establishment: Gabriella is a goody-goody because her mother has to draw her away from her book to attend a Teen Party, which is one of those alcohol-free, drug-free highly-supervised youth events that youths don’t really go to.

Troy is playing basketball and has proto-Bieber hair. This is all you need to know about either of them for the rest of the movie.

Also, it’s New Year’s Eve. They’re at a winter version of the resort from Dirty Dancing.

02:35 Am I am old lady who misses her glory days of 2006, or do Troy and Gabriella’s outfits look (dated but) cute? Troy’s panicked face as he sings karaoke looks like when that girl (Bethany Byrd?) starts singing along to Jingle Bell Rock after the music cuts out in Mean Girls.

07:30 Troy and Gabs exchange numbers on phones the size of Pop Tarts.

10:27 Do kids even still get in trouble for having cell phones in class? When we were in high school they were strictly verboten, and when someone’s would go off in class everyone would start coughing and shuffling stuff loudly so they could turn it off, which in retrospect was a really touching show of solidarity.

By the way, Gabriella transferred. To TROY’S SCHOOL IN ALBUQUERQUE.

I have thought that 2 or 3 different extras were Kristen Bell but it’s just that everyone in 2006 looked like Veronica Mars.

10:50 You can tell the drama teacher’s a drama teacher because she’s wearing a flowy printed top and chunky jewelry.

14:42 Get’cha Head In The Game: I love basketball when there’s pretty, overly-groomed young men singing pop music to me during it.

I forgot that it was styled “get’cha” until I looked it up. 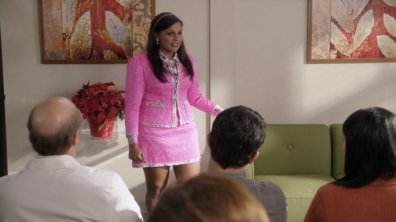 19:13 I used to think flared jeans were so flattering, but based on the East High extras, they were NOT.

27:50 Do we ever get an explanation why that one girl auditioning has clusters of fake freckles painted onto her cheeks? Frustrated Annie reject?

Most of my goodwill toward 2006 fashion is gone now. SO many awkward-length skirts cutting people off at the wrong spot.

30:00 Oh, the awful pop-punk outfit on the girl doing interpretive dance during the audition.

32:00 I can’t remember the last time I saw HSM, but it must have been ages because I forgot about Ryan Evans , beacon of light, best thing in this movie, he of the lime-green bedazzled newsboy cap, teen version of Derek from Full House, most plausible theatre kid in all of East High. 37:00 OK but did Troy start ALL of his songs making a face like Bethany from Mean Girls? 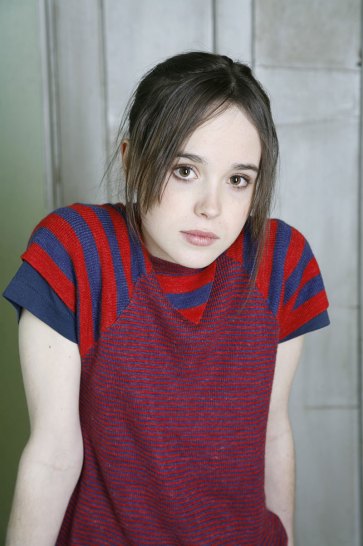 39:00 Now that I’m a sophisticated 29-year-old adult instead of a scrappy, wide-eyed 19-year old, it’s all about the Ryan-Sharpay friendship. Troy & Gabriella are kid stuff.

Do you think there was a whole room in wardrobe just for all these damn newsboy caps?

“They’re going to do it!” I said, out loud, to myself, as a grown woman, in the house that I bought, because they’re about to sing Stick To The Status Quo.

Wasn’t there an interstitial or something going behind the scenes of Stick To The Status Quo on Disney Channel back then? Or a pop up video kind of thing? Maybe it was of the whole movie? 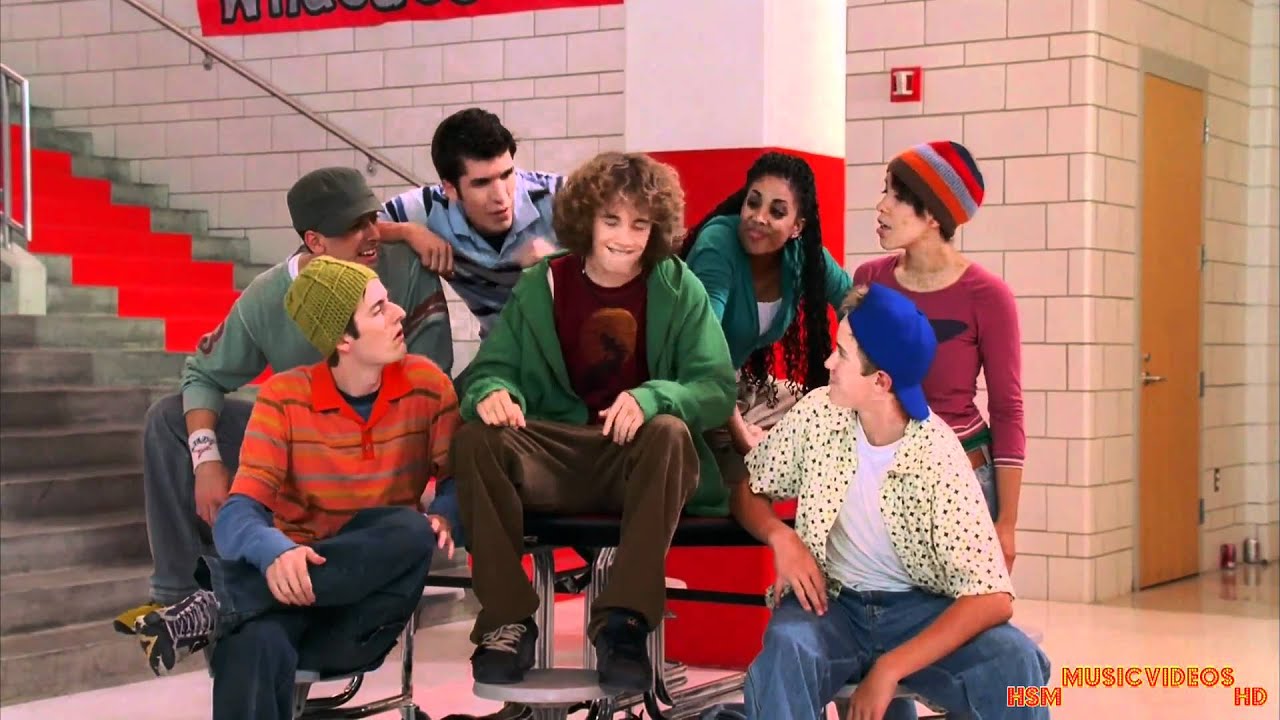 Stick To The Status Quo is a musical version of the show Made that aired on MTV during this era.

48:00 Troy tells Gabriella that his parents’ friends are always saying “your son’s the basketball guy. You must be so proud,” which seems like a weird thing to say, but what do I know?

39:00 I don’t remember doing things outside of your clique being such a big deal in high school. We’d get annoyed if a non-theatre kid randomly auditioned and landed a good role, but that was just because we felt like they hadn’t ~earned it or whatever.

54:00 It’s gotten to where when I look at Troy Bolton (OK, Baby Zac Efron) ALL I can see is Baby One Direction.

1:00:00 Chad is guilt-tripping Troy worse than an Irish-Catholic mother (or a Jewish mother, both are great at guilt). I assume Chad-Troy ships are a thing on parts of the internet?

1:03 Honestly, Gab, there never really WAS a you and Troy, was there?

1:10 Obviously not all houses in New Mexico are made of adobe with Spanish tile roofs or whatever, but Gabriella’s house looks super northeast-y.

1:11 It’s kind of like every time he begins singing, Troy THOUGHT he was going to be talking instead but it came out as song.

1:13 Hat watch: Now Prince Ryan has a flat cap and Kelsi has a bucket hat and Sharpay has a gilded tam o’shanter. This was the beginning of the era of Disney programming being all wacky patterns and colors in the wardrobe and set design. Even in the Lizzie McGuire/Even Stevens age, things were a little more toned-down.

All of these shows aired when I was well past childhood, yes.

1:18 Adults Against Troy And Troy’s Dad’s Weird Over-Enmeshed Relationship. Meeting tonight and every night on Netflix.

1:25 Another thing I forgot: this would more accurately be called High School Musical Auditions And Scheduling Conflicts.

1:26 Jeez Louise. Hat watch: Kelsi has a bowler hat now. If this movie went on much longer they’d have her in one of those Dr. Seuss hats or a beanie with a propeller.

If you were maybe the kind of person who felt they were too old for High School Musical in 2006, I can’t overstate what a game-changer it was for the Disney Channel. You can stop laughing, I’ll wait. The mid-2000s Disney Industrial Complex was HUGE and when you look at the people who came out of it – Zac Efron and Vanessa Hudgens, but also Miley Cyrus, Selena Gomez, Demi Lovato, the JONAS FREAKING BROTHERS – you realize they had some real geniuses working in development. The turnaround definitely started in the early 2000s with Hilary Duff, Ravyn-Symone and co. and just kept shooting upwards. After the early 90s Mickey Mouse Club era, it was pretty blah for a long stretch. Yes, I just sang the praises of mid-2000s Disney and I could keep going.

1:30 I was never that into Breaking Free though? But it was probably the biggest hit from HSM.

1:32 Love when musicals end with a dance jam, like the pep rally/ basketball game-turned singalong, We’re All In This Together.