Welcome back to Cheers Chats! We are still doing this! It only gets harder!

(Brief synopsis of what happened prior to this episode)

T: Two whole seasons have passed since our last Cheers Chats and that should tell you something. Let us remind you that we’re following the AV Club’s list of basically the top 10 Cheers episodes and none from seasons nine or 10 made the cut. And I totally get why. It’s just not as good as the first couple of seasons were, much like many shows that manage to go on for this long. Also, the sexism and misogyny continues, so there’s that.

M: I distinctly remember my parents talking about how it was going to be the last season of Cheers, and the outcry was so great that the show kept going for another year or two. These years must have been seasons 10-11, so I have no clue why the plug wasn’t pulled. It has not been great. It also feels like they’ve gone to increasingly more soap opera-ish plotlines instead of the chummy jokiness of the early seasons.

T: Let’s see… Rebecca’s rich boyfriend Robin Colcord turns out to be a money launderer or something and ends up in jail. He proposes to her just before he’s released from prison, and struggles with wanting to marry him for his money. Luckily, Sam knocks some sense into her and she doesn’t go through with the wedding, and Robin ends up poor as dirt. At the end of season 9, Sam and Rebecca (who are not a romantic couple) decide they want to have a baby together because their biological clocks are ticking. By mid season 10 they decide against it since they realize they’re not ready to become real parents.

Meanwhile, Woody gets married to his longtime girlfriend Kelly, Carla has a purely sexual relationship with the pretentious owner of Melville’s the restaurant above Cheers, her oldest daughter, played by Leah Remini, gets knocked up, and Cliff and Norm are pretty much the same.

The dramz comes from Lilith and Frasier, who continue to be parents to a young tot, Frederick, and they also decide to renew their vows. However, in season 11, Rebecca catches Lilith cheating on Frasier, and they split for a few episodes (and he almost sleeps with lonely Rebecca) before Frasier decides to take her back. Ugh.

In the episode right before this one, a semi-serious experiment on voting conducted by Frasier results in Woody running for city council and he ends up winning. And Kelly reveals she’s preggo.

M: If you can’t remember everything Traci just wrote, just assume that every female character has been pregnant or almost-pregnant since we last wrote. Except, somehow, Carla.

Carla and the gang at the bar drink too much after Sam makes her a bartender, and she confesses to Sam that she slept with one of the guys.

What Had Happened Was

T: Woody didn’t realize being a City Council member is a full-time job, so and Sam (who owns the bar again) and Rebecca (Cheers’ manager) have to replace him. They agree to let Carla take over, but she gets everyone super drunk. They spend the rest of the episode figuring out what happened last night.

This ep felt like a regular bottle ep from the early seasons, and while it may be the classic trope of solving a mystery in which all the suspects were drunk, it worked.

M: It kind of reminded me of Sunday brunches in college spent reconstructing everything that happened the night before. It was a pretty good episode, until the Paul reveal anyway.

Definition of Your Fave (Character and Show) Is Problematic:

Sam: Yeah, uh, listen I know what you want to do is run out there and tell the guys, but I’ve got to remind you here, Paul, a gentleman does not kiss and tell. It’s just not cool.

Sam: True. True. But I’m Sam Malone, and by definition, everything I do is cool.

Paul: Sam, you just don’t get it. This kind of thing has never happened to me before. And now, with the one time it does happen, I can’t even crow about it just a little?

Sam: Yeah, I know. I know how you feel. All right, I tell you what. Why don’t you crow in here with me and get it out of your system.

Even though it’s Paul and not like, Carla bragging about the sex, this double standard is still ridic. Why does anybody need to be bragging at all?

Sam tries to comfort Carla by telling him nobody is perfect, and confesses he has a toupee of sorts aka a Hair Replacement System.

Is this one of the series’ big mysteries they needed to answer before the show ended? Like finding out who A is in PLL?

T: Woody’s hangover cure: “First, put on your pyjamas. Then, take an aspirin with a glass of cold water. And then, you vomit till your nose bleeds and heave until you see the angels. Wake up in the morning, you feel brand-new.”

M: Woody is dressed like a preschool boy on picture day in 1993.

T: Protect Woody At All Costs.

Becky with the Good Hair

T: When Sam tells Rebecca to call the agency to hire a waitress to replace Carla, Rebecca makes the excuse, “But could you dial, I just had my nails done.” This is a throwaway joke that is v unnecessary to the storytelling.

M: Also unnecessary to the storytelling at this juncture: Rebecca.

The moments that made us literally laugh out loud

The day after Carla makes her “signature” drink consisting of pure alcohol, all the regulars aren’t there at their usual time the next day, and the place is a mess. Norm, who is basically a functioning alcoholic at this point, walks in all hungover, and Rebecca and Sam are the only ones to greet him with the usual NORM!, causing him to keel over.

Everybody’s slow, stunned, disheveled entrances into the bar the next day were A+++.

Norm: “I’ll tell you what’s on your butt if you tell me what’s on mine.”

And they couldn’t even do tattoos right:

Frasier: “All right, let’s review. Last night I got, knee-walking drunk, and now I am back in this bar, a mere seven-and-a-half hours later, hung over. Well, it’s official. I have a problem.” Frasier, who seems to be the only sane person at this bar

Woody: “Hey everybody, sorry I’m late. I was on my Nordic Track.” REMEMBER NORDIC TRACK

Cliff: “That was either Carla or the grim reaper.”

Fraisier: “Dear Lord, let it be the reaper.

This episode is one of the handful of eps written by a woman. A woman who happens to be Rhea Pearlman’s sister. So why do these lines continue to be problematic?

Carla: Not really, Sam. I mean, I talk a lot, you know, but when it comes right down to it, I’m more talk than action. But even when I did fool around, I, I always knew their names. I was always in control, you know. Last night was the first time I ever lost control. I stepped over the line. I am now officially a slut.

(Okay, also I just felt really sad for Carla after the above speech, so I didn’t expect “I am now officially a slut” to be a laugh line. It felt like more of a moment of self-loathing?)

Cliff calls the bar hangover and confused as to where he is. Turns out he passed out in the office. In what world is his first inclination to call Cheers (a number he not only memorized but remembers while being hungover)? THESE PEOPLE HANG OUT AT THE BAR TOO MUCH.

Why does Sam’s hair look exactly the same pre- and post- rug removal? 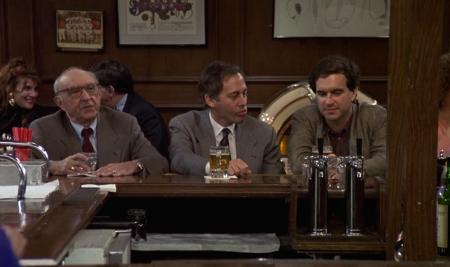 Overall, this was a better episode than most. Season 11 has stepped up its game.

“I’m gonna make you one pitcher of a little drink my grandfather taught me. It’s called, “I Know My Redeemer Liveth.”

Drunken Carla sleeps with a Cheers dude but she can’t remember who it is. I really hope it’s Cliff. Only because she hates him so much.

Carla: “Oh, Sammy, Sammy, please! Please, tell me it was you!

Carla: Oh, God! Oh, God, the options that leaves are so horrible!

Carla: Well, I guess there’s nobody else.

Sam: Well, what about Cli-

Carla: There’s nobody else, Sam!

Cliff: What do you want to know, Carla? It was F-U-N Fun!

IT TURNS OUT TO BE PAUL, THE DUDE THAT MYSTERIOUSLY BECAUSE A CHEERS REGULAR CIRCA SEASON NINE AND THAT IS A WORSE VERSION OF CLIFF

Cut to a prolonged scream from Carla echoing above the Boston skyline.

I truly love Sam and Carla’s relationship and I’m glad it’s never gone romantic (bar that one time they kissed but they were like ew).

Also, they are the first two characters we fell in love with and I wish more had been done with them as a friend duo instead of so much focus on Sam’s relationships.

Carla: You are a terrific, sweet guy. I mean, anybody who would do what you just did to make someone feel better is the best friend in the world.

Carla: Sammy, you don’t think any less of me, do you?

Sam: Well, let’s see who it is first.

Carla’s Purple daisy shirt is way more cheery than Carla ever has been or will be.

Rebecca is sporting a sensible seafoam green blazer, which is fine, I guess, but just very 1993.

The day after the night everyone got drunk, Carla shows up to work in a “Grim Reaper” jacket and hat. Because that’s less suspicious. 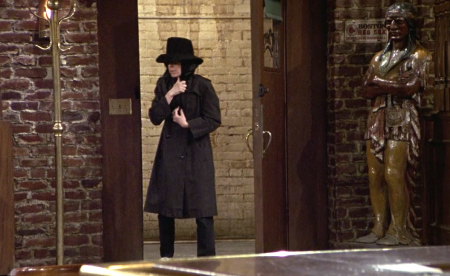 Carla’s got a Hey Dude fringe shirt underneath the disguise, and the best part is that there’s a mirror image of the black fringe on the back. OH she’s also wearing neon green earrings shaped like a shovel and a saw. This is some straight up Claudia Kishi business right there.

Woody’s shirt just brings me right back to the 1990s.

T: I’m so glad this is almost over. Hopefully the series finale is as good as people say it is.

M: Real talk: Traci had to do all the heavy lifting on this one because I watched the whole episode and just … didn’t have anything to say. Come on, finale!

Next Up: We are basing our watch list off of AV Club’s 10 Episodes That Show How Cheers Stayed Great For 11 Seasons. We’re going chronologically, so stop by next month when we’ll discuss the series finale, One For The Road

One thought on “Cheers Chats #11: It’s Lonely at the Top”