0:00 I can already tell that if you’re the kind of person who hates creepiness, you should get out now. First of all, the film opens with a pan throughout a Miss Havisham-y house. Second, Sally Draper (Kiernan Shipka) narrates that she and her siblings were “four beautiful children,” which is just weird. She compares them to Dresden dolls, by which I hope she means this:

0:02 The combined effect of the  1960s/1970s suburban home, with the Dad wearing a suit and hat and carrying a briefcase, and the icy-looking mom (Heather Graham) is really not helping me think of this as anything but a movie about bad stuff happening to Sally Draper. 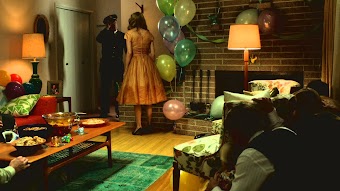 No matter what else happens in this movie, the most unrealistic thing will be the 5-ish-year-old girl voluntarily playing with one of those wooden toys where you move the balls across wires. You know, that lame toy that is required by statute to appear in every pediatric waiting room in the United States?

All you have to do is google “doctor’s office toy”

0:10 The Fake Drapers’ house and its contents are about to get straight repo’ed, and they have to go to Heather Graham’s family’s haunted-ass house under the cover of darkness.

0:12 I only sort of vaguely know what goes down with Cathy and Christopher later, but is it supposed to be foreshadowing that they’re talking all flirty and gross on the train? Note: to me, tweenaged siblings being nice to each other is by default “flirty and gross.” Shouldn’t they be picking on each other?

0:16 Bad Grandma says that Cathy and Christopher can’t share a bed, and Heather Graham responds “they’re children, they’re innocent.” Okay, everyone in this family is an idiot. First of all, in any normal family the mom would be arguing that the kids couldn’t share a bed, not because of any gross stuff with “innocence” but because they “need their space.” Bad Grandma says that the two girls will share a bed, and the two boys will share a bed, which is probably the solution most families would have come up with in the first place — primarily because the twins are smaller so putting one of them in each bed gives everyone more space. Ugh. Dummies.

Also, they have to hide behind curtains or something so their grandfather can’t hear them. Ughhh.

0:17 Graham is trying to win her way back into her dad’s will by hiding her children in her house then reconnecting with him.

Sally Draper is wearing a promise ring, which is probably your first big sign that things are sketchy in this family. I can’t be the only person who has read about them with horror and disgust?

0:23 THERE’S GONNA BE A LIZZIE BORDEN MOVIE! With Christina Ricci, the queen of ethereal yet creepy characters! Looks like I better get my live-bloggin’ pants ready.

0:24 Evil Marilla Cuthbert drops the kids’ food off for the whole day. So, this is like a horrible version of that time Samantha Parkington hid Nellie and her sisters in her attic, right?

Well, she couldn’t leave those bitches at Coldrock House, could she?

0:25 I think Evil Marilla Cuthbert is the only sane person in this family. She tells the kids they are supposed to “be modest while using the bathroom,” and if they don’t have that down by their teenaged years then frankly maybe they should be separated from society.

0:27 We learn the twins’ names: Carrie and Cory. How many bombs do they need to drop telling us this family is creepy? Between the shared first initials and promise rings and scary focus on modesty, I feel like I’m watching 19 Kids and Counting.

0:31 Ellen Burstyn (Michelle Duggar in 30 years??) makes Heather Graham show the children the lashes on her back – including “18 lashes for every year she used her wicked charms on [her] husband.” As in, Heather Graham’s dad. As in, I hate this movie.

0:35 It’s a commercial break, so let me tell you my main association with V.C. Andrews. In junior high, one of my friends found a bunch of V.C. Andrews books in perfect condition at a library sale. She bought them for 25 cents each, read them, then went to Barnes and Noble saying that her grandma got them as a gift for her and she didn’t have a receipt. She returned them for some serious seventh grade bank. This movie is making me realize that her Pretend Grandma, buying her grandkid stacks of V.C. Andrews books, would have to have been a real creep.

0:39 Heather Graham and Fake Don Draper were raised as siblings, and Fake Don Draper was her half-uncle. Ew. They didn’t meet til later in life. I’d think this was crazy, but we did go to high school with a girl who had a child with her surrogate brother (who I think her parents adopted????) shortly after graduation.

0:42 Evil Marilla Cuthbert asks Sally Draper if she poses for her brother’s paintings with her blouse off. Ew. She said “blouse.”

0:45 They’ve been in the House of Horrors for a month, but Heather Graham has been out gallivanting with her father.

0:51 Corey locked himself in a trunk, and Sally Draper gives him a bath because that’s the best way to bring a child back from near-death by suffocation.

0:53 It’s Christmas, and the children Stockholm Syndrome up a present for Grandmother. She closes the door and walks away, overcome with either emotion or shame at how bad the kids’ art project is.

0:54 The kids get a dollhouse for Christmas, because this movie needed to get that much creepier.

0:55 The teens have to hide in a bar to watch the family’s party.

Let’s just recap a little. The Dollangangers’ father died. The Dollangangers learn that they’re really Foxworths. They have to move to Foxworth Hall Manor Estate, or something that sounds like either a low-rent townhouse development or midrange wine label. The kids have to hide from their grandfather, while their mother puts the moves on him to try to get written into the will. The grandmother, a horrifying blend of Marilla Cuthbert and Michelle Duggar, hits Heather Graham with switches and insinuates that the kids are all gettin’ it on with each other. And now they’re at a Christmas party with Greensleeves playing on a lone violin, because if anything says “hopping holiday bash,” it’s Medieval songs on string instruments.

Everything after Fake Don Draper dying could have been prevented if Heather Graham (Corinne Foxworth, I guess?) would just get a damn job already.

1:01 Heather Graham has turned into her mother, threatening to whip the kids and telling Sally that she can’t leave the room.

1:02 THERE’S A GABY DOUGLASS MOVIE TOO??? Oh, shoot, better get my live-bloggin’ hat ready too.

[My live bloggin’ hat is nothing, because I look stupid in hats, like an Irish orphan from yesteryear.]

1:09 Heather Graham and Kiernan Shipka having “the talk” makes me so relieved that my parents entirely avoided this sort of thing. I’m in my late 20s so I think I’m in the clear now. But, Graham cuts the talk short, which I think means that Kiernan isn’t going to know what sex is and thus obviously she’s going to go have it with her brother.

1:10 Bad Grandma walks in while Kiernan is changing and Christopher’s there, which looks bad but isn’t.

Grandma: You think you look so pretty n your new young curves and your long golden hair. [That’s also me, to every annoying teenager in the mall, ever.]

1:12 Nope. Chris and Cath decide that they and their sibs will go without food for a WEEK rather than cut her hair. You’ve got to be kidding. There’s nobody to even look at her hair, except her brother, and if that bothers Cath then she’s not really helping her case, huh?

LOL Kiernan’s wig though. She looks like Tina Majorino in Waterworld:

1:20 The twins, looking especially Children of the Corn-y, totally cock block Christopher and Cathy. Praise be.

1:24 Heather Graham got married to her dad’s attorney and went to Venice for two months while her children were locked in an attic … and all they got was this lousy toy gondola!

1:29 Chris gets whipped by Bad Grandma, which isn’t a metaphor or anything, and then Cathy and Chris kiss, because if anything is a turn-on it is your own sibling, who has just been schooled by a frail old woman.

1:34 Cathy and Chris are getting mighty close, and Kiernan’s hair has grown out into a sassy, choppy bob.

1:41 Sally and her brother have planned to leave, stolen money from their mom’s Sterling Cooper Draper Price-y looking husband, made out, then woken up in bed together. I hate it all.

1:42 Corey doesn’t feel well. The makeup people at Lifetime show this by dying his lips blue, like he just ate a raspberry ice pop.

1:43 Sally and Heather stage-punch each other, and I haven’t seen acting combat look so fake since I was 10 years old in the Flower City Youth Players.

Carrie’s super bummed, because now who will she hook up with in high school?

Also, the donuts were poison, which is why Cory (and the kids’ mouse) died.

Who’s the flower in the attic now, bitch?

6 thoughts on “Live Blog: Flowers In The Attic”