Happy Valentine’s Day to everyone, but most especially to America’s newest sweetheart, Adam Rippon!

If you have been following the 2018 Winter Olympic Games in Pyeongchang, you will already be familiar with Adam as the fiercest figure skater and ready-for-the-runway glamazon bitch, always ready with great eyebrows and a witty quip for Andrea and all of us.

If you haven’t, perhaps a little explanation is necessary.

Adam Rippon has been on the figure skating scene for a long while, but at 28 these are his first Olympics. Bummed we didn’t get to watch him in 2014? Don’t be. It’s the DGAF-ness that comes in your late 20s that makes Adam so endearing. You want examples? We’ve got examples, Valentines.

Let’s start with skating. If you missed this performance in the team event, get ready to have your heart ripped out of your chest and triple-axele double-toe double-looped across the ice. YouTube is I guess being very strict about Olympic vids but just go to NBC.

Also the scoring was a little garbage (in the words of Johnny Weir, first place skater Kolyada was “oatmeal”)  but we all know that figure skating’s scoring system needs work.

Adam’s not concerned, though. He came to play. And he’s going to celebrate later by going to Target, which is pretty darn relatable:

Adam has supporters all across the globe, but a few famous ones include Elmo:

And let’s not forget Reese Witherspoon, because all Adam wants to do is maker her proud. Olympic figure skaters, they’re just like us!

Reese was very proud indeed, and Adam dedicated the medal to his mom, “but more to [Reese] in a way, because she has more followers on Instagram”:

"I owe this medal to my mom, but more to @RWitherspoon because she has more Instagram followers." @adaripp is a national treasure, we must protect him at all costs. pic.twitter.com/nlCsD9dy5K

He calculates that Reese has probably spent, like, three minutes of her life composing tweets to him, which is a pretty big deal when you think of how busy she is with the next season of Big Little Lies and the spring Draper James collection, among other things.

Adam is Olympic roomies with Mirai Nagasu and their friendship is everything. They’ve been friends for a decade and during the 2014 Olympics they were eating hamburgers on a rooftop waiting for their time to shine.

Four years ago, Adam Rippon and Mirai Nagasu were eating hamburgers on a rooftop after missing the #WinterOlympics.

I have seen brides and grooms watch their spouses walk down the aisle with less love and pride than Adam watches Mirai skate with.

One more reason to love Adam Rippon (besides his flawless performance):

Although every Olympian needs supporters, you know who the real motivators are: haters.

Nothing but love from all of us at Planned Parenthood, @Adaripp 💞 pic.twitter.com/5zOT8DF33H

A few haters have reached out to Adam over Twitter, and our precious glamazon bitch ready for the runway has a few words for them:

To all those who tweet at me saying that they “hope I fail”, I have failed many times many times in my life. But more importantly, I’ve learned from every setback, proudly own up to my mistakes, grown from disappointments, and now I’m a glamazon bitch ready for the runway.

My favorite thing about Adam, other than his sense of humor and general cheekbone situation, is his confidence. He encourages everyone to be who they are:

FUN FACT: Being true to who you are and not giving a shit about what others think about you is an awesome and liberating thing whether you are gay or not – Sometimes we the gays need to be reminded more often but, LIKE, EVERYONE SHOULD TRY IT, FOR REAL. JUST DO IT.

I mean. This is a man who skated after singing Rhianna’s Diamonds in an exhibition, and it was GOOD. He explained that he is always changing it up, “always trying to keep these bitches on their toes.”

Believe it or not, Adam is the FIRST openly gay athlete to qualify for the Winter Olympics. There have been other athletes who weren’t out at the time they competed, and this year’s Olympics also feature out skier Gus Kenworthy. They’re certified cuties:

In case you’re wondering if that tweet was directed at … anyone … in particular… the answer is of course, yes.

The #OpeningCeremony is a wrap and the 2018 Winter Olympic Gaymes are officially under way! I feel incredibly honored to be here in Korea competing for the US and I'm so proud to be representing the LGBTQ community alongside this amazing guy! Eat your heart out, Pence. #TeamUSA #TeamUSGay 🇺🇲🏳️‍🌈

Mike Pence is in Pyeongchang ‘supporting’ the U.S. athletes, and also believes that you should shock gay kids into becoming sad gay kids. Does Adam have anything to say to Pence? Not particularly, no. 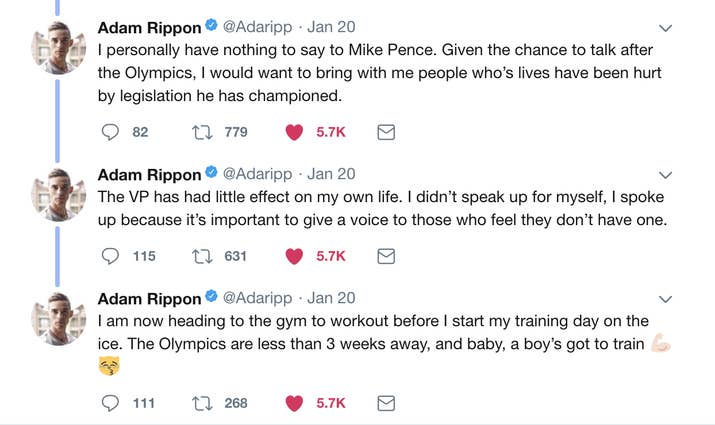 Basically, Adam is using his platform to raise the voice of others who are affected by Pence’s views – saying “right now I have a voice and I think it’s really important for me to use it” – but these Olympics aren’t about Pence. They’re about athletic, hard-working attractive people who are much funnier on social media … and being America’s sweetheart:

Adam has also used his platform to highlight the body image issues and disordered eating common among male athletes in the figure skating world.

Anyway, vice presidents aside, at the end of the day a gay athlete is just like a straight athlete with better eyebrows:

I was recently asked in an interview what its like to be a gay athlete in sports. I said that it’s exactly like being a straight athlete. Lots of hard work but usually done with better eye brows.

So, should YOU go to the Olympics? Adam highly recommends it if you ever have the option.

As for Valentines, I’m afraid Adam already has the best one in all of South Korea, saying “nobody loves me as much as I love me; so I guess I’ll just be my own Valentine tomorrow.”

On this February 14th, let’s remember the truly important thing:

Happiest of Valentine’s Days to our beloved runway-ready Glamazon Bitch.