It’s week two of our month-long series dedicated to Parks and Recreation, and since we’re in the midst of RomCom Week here, we figured we’d feature the romantic side of this #blessed sitcom with the series’ best OTPs.

If you’re not into the Internet (I’m guessing if you’re reading this, you are), OTP = One True Pairing, or in basic terms, your favorite couple (usually of the fictional sort). Basically it’s the two people (or inanimate objects, whatevs) that you have an unhealthy obsession over their wellbeing together. These OTPs are ones we’ll miss dearly, ones we already miss, and ones that will live forever in our hearts.

I ship Leslie and Ben as much as the next person, but let’s be real, one of the reasons that make Parks so special is Leslie’s independence as a woman. She’s a fantastic, strong, positive person on her own, and doesn’t rely on others to get shit done. But that’s different than enlisting the help of your friends and loved ones. Because of her generous heart, she has forged strong relationships with others, including the love of her life, Ben, and the other love of her life, Ann. Leslie and Ann’s friendship started off kind of work related, but it turned into this beautiful, brilliant, powerful musk ox of a relationship that is really unparalleled with other fiction female friendships on TV. They look out for each other, they support each other, they genuinely care for each other. They’re each other’s soul mates, and not even distance can tear them apart. Ovaries before brovaries, y’all.

Before Ben came along, Leslie needed someone that was as smart or smarter than she was, who could handle previously stated independent woman qualities, and someone who would support her in any dream she dared to follow, no matter how big or how small. That’s what make’s their relationship work so well – no matter what they each go for in life, the other is right by their side. We saw it when Ben ran Leslie’s councilwoman campaign, and *potential spoiler alert* we’re most definitely going to see it when Leslie helps Ben run for Congress. Like Ben said during his vows, he had been to 46 cities in 11 years, but all that time, he was just wandering around, looking for Leslie.

Ben and Game of Thrones

I would’ve put Ben’s side piece of Calzones on this list, but ever since they betrayed him, idk if he’ll ever be able to trust them again. Who he can trust are all those GoT folk, like the Lannisters and Tyrions and dragon women and red wedding (I don’t watch it, can you tell?). Ben will gladly defend the show to anyone, since GoT is not just a “fantasy” show – it’s a show that tells human stories in a fantasy world.

As early as season two, we find out that Leslie has a gigantic crush on our nation’s Vice President. When Ann asks her what her ideal man is, Leslie responds, “He has the brains of George Clooney in the body of Joe Biden.” I mean, that’s just not an answer you hear every day. But it’s exactly the answer you expect Leslie Knope to say. By the beginning of season five, we see Leslie achieving one of her dreams, and meets big Joe himself. The brief meeting is enough to get us to ship Leslie and Joe if this whole Ben thing doesn’t work out (JK THEY WILL NEVER BREAK UP). Ben setting up the meeting with Joe (and also Leslie getting Ben the Iron Throne) are yet another reason to admire their relationship. They just love seeing each other happy.

Unlike Ben’s calzone betrayal, JJ’s waffles have never done her wrong. Not even a bout of the flu could take her away from her beloved round slabs of dough slathered in whipped cream. At one point JJ tells Leslie she spent over a thousand dollars (at JJ’s) on waffles alone. Some amazing person on Tumblr did some calculations and figured she had 4 to 7 waffles a week. I can’t even think of one thing I eat that many times a week. Maybe coffee. Yeah coffee.

Donna and her Mercedes-Benz

Donna may have found love in season seven, but throughout the series, she happily touts her flings with men. But her longest and most meaningful relationship might be the one she has with her beloved SUV. The above clip is when Leslie accidentally shoots her car during the gang’s hunting trip at Ron’s cabin, and her reaction pretty much sums up how she feels about it. In a full circle moment (and yet another testament of how much Leslie’s friends love her), Donna willingly rams her SUV into a truck belonging to the stupid owner of a van company who won’t handover the vans so that the gang can pick up senior citizens and drive them to a polling place to vote for Leslie. Donna selflessly injured her baby so Leslie could win!

Andy and April are one of my favorite television couples of all time. When Andy says something half-witted or April says something creepy and depressive, the camera never zooms in on their other half making a WTF face, which would be the approach of most sitcoms and, face it, most people. It shows them making googly eyes of affection, instead. Whether it’s Andy’s band or April’s dream of buying a haunted-looking racoon hostel of a house, they have each other’s back,  always see each other in the best light, and encourage each other to make those big crazy decisions. 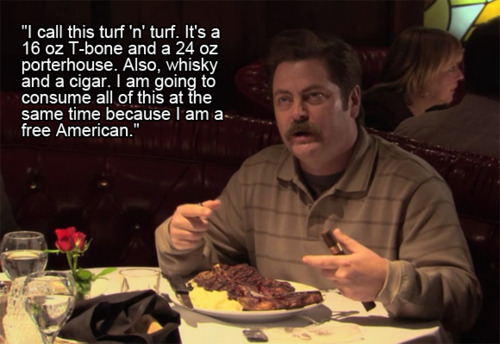 Ron Swanson lives on his own terms. He hates government intervention, sentimentality, and fluff.  He calls vegetables “the food that his food eats” and tosses vegan bacon to the ground in disgust. If Ron Swanson had a tumblr – which he wouldn’t – it would be pages and pages of bacon memes and steak gifs. If Ron Swanson had a refrigerator, not only would it be full of meat, but the door would be plastered with pictures of meat, held up with meat magnets. And if Ron Swanson had a restaurant, the whole menu would be meats wrapped around other meats, and you’d pay through barter or maybe gold bars.

Dr. Richard Nygard is the Cathy Santoni (Full House) or Tino (My So-Called Life) of Parks and Recreation. He is Norm’s wife (Cheers) or the bottom half of Wilson’s face (Home Improvement). Nygard is the unseen, influential, constant presence in Chris Traeger’s life. In 50 years, when a student writes a college thesis about Parks of Recreation, they’ll claim that Dr. Richard Nygard represents God, or maybe Traeger’s inner life. Anyway, Chris loves that damn therapist. As a viewer, you can imagine anything you want about him. Personally, I picture an unlicensed whackadoo who rents the back room of a children’s dance studio in a strip mall, dispensing whatever advice was on Oprah’s Next Chapter that week.

If Leslie and Ann’s friendship grew on a mutual foundation of caring for their community and wanting to do the right thing, Tom and Jean-Ralphio’s grew on a mutual foundation of caring for themselves and wanting to make serious bank. And we love them. Tom and Jean-Ralphio are a couple of silly geese who pursue wacky business ventures and speak in even wackier abbreves. But they’re also two people who don’t quite fit into Pawnee culture, yet have these grandiose ideas of what they can turn Pawnee into. It’s like that quote about how love isn’t about looking at each other, but looking outward in the same direction. But they’d say that they’re looking “O.W. in the same direx,” and they’d half-sing it, and they’d be looking at a Baby Gucci wholesale outlet they built on the Eagleton-Pawnee border.

Lil’ Sebastian and The City of Pawnee 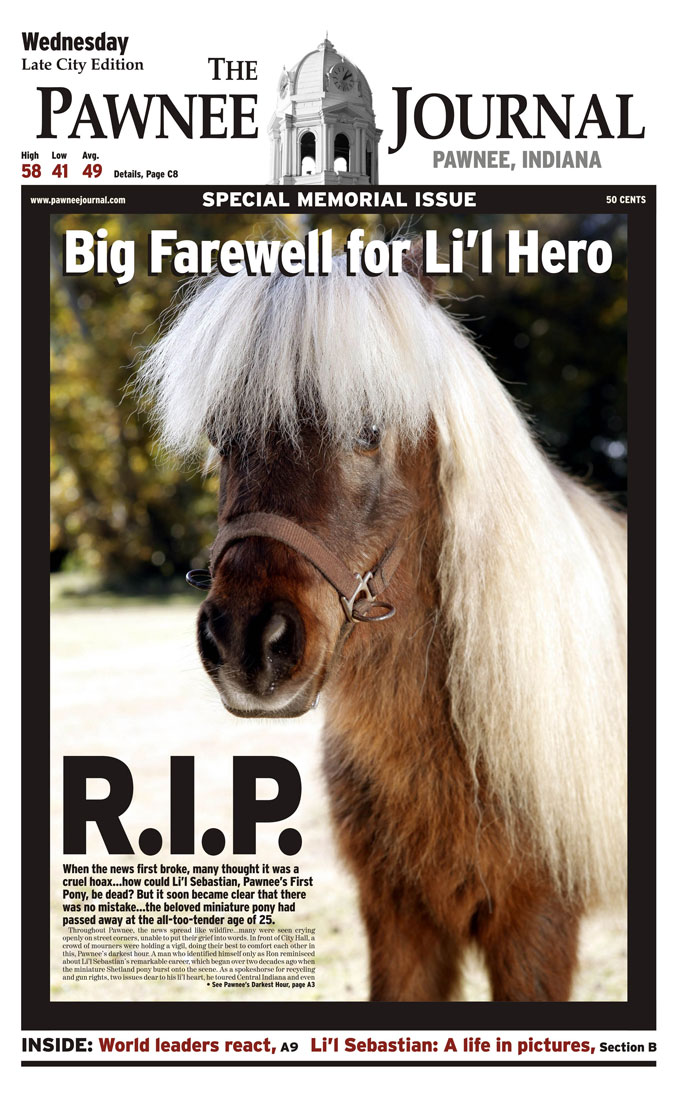 Every hometown has those weird cultural quirks that you can only truly understand if you’re from there. Ours, for instance, had a long-running waterfall laser light show about a man who died in that very waterfall while attempting to jump it with his pet bear (the bear lived). So you might think that Pawnee’s adoration for Lil’ Sebastian is over the top, until you realize that your city has its own weird obsessions. I swear, Leslie could have dined out for years on getting Lil’ Sebastian for the Harvest Festival. Even meat doesn’t make Ron smile as big as he did when surprised with a Lil’ Sebastian sighting. And that miniature horse’s funeral was a sendoff to rival Princess Diana’s. Sebastian may have been li’l, but his impact on Pawnee was anything but li’l. I like to think that Sebastian taught Pawnee how to love.