Believe it or not, I wasn’t a cool kid. Yes, I know this might be hard to get your head around, but despite my appealing attributes – short, freckled, bookish, brillo-textured red hair — I wasn’t exactly homecoming queen.

However, I wasn’t so uncool that I was a total pariah. I was just more of a non-entity. I was also not a social striver: I figured whoever liked me, liked me and I wasn’t about to try to act cool to get cooler friends. First of all, I didn’t care enough*, and second of all, I don’t know HOW to act cool. Did those girls just get a special book at the beginning of every school year telling them what to wear and how to behave? Because if there was a book, I’d have been golden. I’m good at books.

* If you think this means I was too cool to care, let me disabuse you of that idea. I am just astoundingly lazy.

All of my favorite TV nerds are the same way. These characters aren’t all so dorky that people point and laugh at them in the hall. They’re just too busy being themselves to care what anyone else thinks. However, if they did put out an annual annotated guide on how to be cool, that’s not to say these characters wouldn’t have read it:

Millie Kentner from Freaks And Geeks

Although the entire cast of Freaks and Geeks really deserves a place on this list, I’d like to take a moment and single out Millie. Millie was that girl in high school who was a total goody-goody, but only because she actually liked wholesome activities and behaving. I can relate, as my main interests in high school were being obedient and exceeding expectations. Something about Millie is so earnest, it just tugs at my heartstrings. She isn’t so nerdy and well-behaved because she’s sucking up, it’s because that’s what comes honestly to her. Again, I can relate. I can remember one girl on my tennis team  who was acted like I was judging her because she was a “bad kid” and I was, well, hyper-compliant. I wasn’t — I just wasn’t interested in anything too badass myself.

Since I brought it up, tennis is the dorkiest physical activity you can join that still counts as a sport. Seriously. Even bowling might be cooler, in an ironic, blue collar, old-man way. Tennis: The Reading Of Sports.

Seth Cohen from The O.C.

Seth Cohen made teen nerdiness hot. And God, do I still love him for it. It’s hard to believe it’s been a decade since we first met young Seth, who is the first and only person I would ever describe as being “adorkable.” From his snarky message t shirts to his enthusiasm for comic books to his dorky joy about introducing people to Chrismukkah, Seth was everything good about uncool adolescents. I also appreciated how Seth was into indie/alternative music, just like most of my unpopular friends. This just goes to show that most nerdy teens aren’t lame and boring, they’re just not into whatever is in the teen mainstream. Cohen reminds us that dorky teenagers are just one semester of liberal arts college away from being hipsters. Also, just look at him.

Sue Heck from The Middle

The Middle really does not get enough play. I think it’s funny (usually) and hilarious (sometimes). Like all teen nerds, Sue is supremely enthusiastic. Rather than understanding and accepting that she’s a geek, Sue has total faith that someday, she will be one of the cool kids. Because of this, she flies whole-heartedly into the nerdiest activities (see: specialized cheerleading squad for the wrestling team). I especially love her supporting cast of dorky Wrestlerette friends:

By far the most hilarious teen nerd on the list, Lisa Loopner had a chronic stuffy nose, frizzy hair, and a boyfriend named Todd. She may sound like a typical dork, but this character is played with classic Gilda Radner joie de vivre, and that makes all the difference. I… listen. Just watch this.

Lisa Simpson from The Simpsons

Lisa may be too smart to fit in at Springfield Elementary, but she’s also too smart to care… usually. While she does try to fit in with the mega-90s kids on her beach vacation and the occasional third-grade mean girl, she is usually pretty content filling her time with her music, inventions, and Thanksgiving diorama of influential women in U.S. history. However, she is still just a kid, and can be seen playing hopscotch with Sherri and Terri or pining over Malibu Stacy. Lisa isn’t technically a teen nerd, but she has the reading comprehension and math skills of a girl twice her age, which has to count for something.

On paper, Landry (or Lance, whatever) doesn’t really sound like a nerd. He’s a high school football player in a land where high school football is king. He’s the lead singer and bassist in a garage band. He loves the lovely and sometimes-badass Tyra. He even may have committed a pretty big felony (seriously, what WAS that plotline?). However, life isn’t lived on paper. Somehow, despite all of these cool factors, Landry is kind of a dork. He’s also proof that sometimes dorks can emerge victorious. Or crucifictorious, I guess.

Fun fact: As far as I know, Jesse Plemons is the only actor who appeared in both Varsity Blues and FNL. Those, along with the times my high school won states, mark the trifecta of Things That Have Made Me Actually Care About High School Football.

Kimmy Gibbler sucked. I’m not denying that. The thing is, I feel so sorry for her! It didn’t occur to me as a child, but she had three grown men living next door to her who mocked her mercilessly. Danny? Joey? Jesse? You’re bullies. Also, her BFF was kind of a dud. Remember when DJ forgot Kimmy’s birthday cake and made her a dish of hashbrowns with Happy Birthday written on it in ketchup? I sometimes use that as a metaphor when I’ve made really weak gestures of friendship. Try it for yourself sometimes. Kimmy did have some positive attributes, like being a pretty decent keyboardist when Girl Talk butchered The Sign (no, not that Girl Talk). 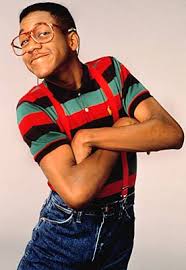 I wasn’t even going to put Urkel on the list. I think he forfeited his Teen Nerd title during the later seasons, when suddenly it was All Steffon, All The Time. I’m also still a little bitter that his affinity for cheese made cheese seem nerdy. I freaking love cheese. Come at me, nerd haters and vegans!

You gotta hand it to Urkel, though. He really knew how to deliver a nerd catch phrase.

He invented “The Carlton,” and that alone earns him a spot on the list. It’s got to be hard being a nerd when you live with super-cool Hillary and Ashley and your badass cousin from West Philly. Having so much money that you live in a full-size replica of the White House probably softens the blow a little. While mostly a classic uptight nerd, Carlton also knew how to let loose and dance.