I have a long history of not caring about the Miss America pageant. My mom went into labor with me while watching Miss America with my older sister. I waited to be born until it had been over for several hours. I guess I was holding out to share a birthday with Nas, Margaret Sanger, and Amy Winehouse instead. Seemed more badass.

Maybe because it was part of my personal mythology, I usually watched Miss America during my formative years – the 90s. Yet even as a little kid, it was easy to see that for Miss America contestants, it was still the 80s. The decade of Dynasty held on in the pageant world long after everyone else was dressing more like Chandler Bing or Joey Potter.  The 90s were a decade of performance fabrics and wash-and-go hair, but these Miss America winners were all hairspray, sequins, and razzmatazz!

I am shocked that Miss America 1991 was sporting such a smooth, restrained hairstyle. But obviously she wanted all eyes on that dress. It’s safe to say this gal really stunned the competition. As in, this is the dress version of a flare gun, it is so bright and dazzling. Pretty color, though.

Note: the 1991 Miss America was actually crowned in 1990. Miss Americas (Misses America?) are titled after the year they will rein. Wait. Rein? Still not that interested, guys. 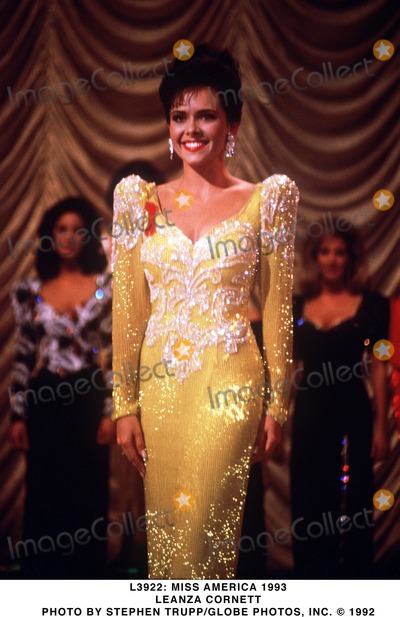 For comparison’s sake, 1993 is the year Meg Ryan sported chunky sweaters and slouchy jeans in Sleepless in Seattle. Meanwhile in pageant world, Miss America was dressed like the grand marshal of the Easter Parade. In Las Vegas. In 1984. I’ve heard that shoulder pads are supposed to make your waist and hips look smaller in comparison, but this just looks like she has bony growths.

Call me crazy, but this one is almost modern. The hair is a little high, as is the dress slit, and there’s some sheer mesh happening, but this looks almost like a dress of the 2000s – well, definitely more 90s than 80s, anyway. Well done, Miss Aiken (Queen Aiken? Not sure).

Time to break my Miss America cool. I was so excited when Heather Whitestone won. She was the first deaf Miss America, and I’m pretty sure there was a feature about her in Weekly Reader, those filmy magazines teachers used to hand out on Friday afternoons because they were sick of us. Anyway, she looks like she’s about to trot down a different aisle after this and become Mrs. America. This is a bridal gown, right?

GOLD. Finally, a group shot. Miss America is the woman in the crown at center, surrounded by the other ladies who are pretending to be happy at her. She has full, majestic Kapowski bangs. But to see the real vestiges of the 80s, I want you to look to the far left, at the gal with the poodle bangs, and far right, at the puffy, towering blond perm.

If you land on her space, you get to skip through the Peppermint Stick Forest, over the Snowflake Lake all the way to the Ice Cream Sea!

These mega-highcut bathing suit bottoms went out of style with Day-Glo and side ponytails, but not at the Miss America pageant! Usually you don’t see such high-waisted drawers on someone under the age of 85. However, sometimes when magazines do features on picking the right bathing suit for your body-type, they still suggest high-cut bottoms for ladies with wide hips, because I guess the best way to camouflage that is to wear a bathing suit that exposes your entire hip area.

Beyonce hadn’t invented the wind fan yet at this point, so that big ol’ hair is held up by hairspray and a whole lot of ratting.

Blanche always was the hot Golden Girl, and frankly, I can’t blame Miss America for taking a page from her hair style book. This was truly a Miss America to lead us into the new millennium – with the tousled locks of a retiree from the late 1980s.

3 thoughts on “Fairest Of The Fair: Winning Miss America Fashions Of The 90s”