Remember Little Women? Of course you do. It’s the 1860s tale of 4 New England sisters – the bitchy one, the one with a complex gender identity, the social anxiety one, and the other one – learning about life, love, and saving your work in case of manuscript fire. 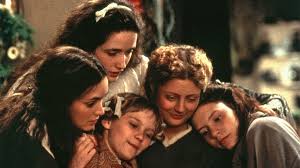 Except now that the C.W. is getting into it, Little Women is going to be more like this:

Little Women is described as a hyper-stylized, gritty adaptation of the 1868 novel by Louisa May Alcott, in which disparate half-sisters Jo, Meg, Beth, and Amy band together in order to survive the dystopic streets of Philadelphia and unravel a conspiracy that stretches far beyond anything they have ever imagined – all while trying not to kill each other in the process.

Okay, we can work with that. I read Little Women probably a dozen times as a kid, and I lived in the dystopic streets of west Philly. Here are some sample plotlines:

Okay, so this is not going to be good. And if it airs, I’m watching every week.