Is Harry Potter and Christmas synonymous for anyone else? Ok great. Earlier this year, Emma Watson nabbed the role of Belle in the live-action Beauty and the Beast, which has wrapped since then and also features all the actors. All of them. But what would happen if the deep bench of HP players also starred in Disney reboot movies? We took a look.

Disney and Harry Potter, the entertainment franchises that brought magic to our childhood (and, um, teens and 20s), are now at one. Emma Watson – Hermione Granger in the Harry Potter movies – will be playing Belle in a live-action version of Beauty And The Beast! Belle was always my favorite Disney princess because she liked books. I had the redhead solidarity thing with Ariel, but even at age five I was like “Ariel, girl, get a grip. You look desperate.” But I digress. The Harry Potter movies were full of amazing actors, and the Disney movies have a bunch of awesome characters. Emma Watson as Belle is a good start, but I think we could make this a regular thing:

Prince Eric from The Little Mermaid needs to be so dreamy that a mermaid –  whose greatest joy is singing  – gives her voice to a sea-witch so that she can get legs and like… hang out with him silently in a rowboat. Sounds like an awesome date. See what I mean about Ariel? Anyway, when I think “Hogwarts Dreamboat,” I think Alfie Enoch.

Ron Weasley had a lot of strong points, but he was sort of a borderline bro sometimes. The Disney version of that is John Smith in Pocahontas. He’s an imperialist dumb-dumb, but he’s so dopey that you can’t really hate him. There’s that spark of goodness in Ron, too, so we know that Rupert could balance the character’s likability with his more annoying traits. Oh, Draco. You loved to hate him. For the character to work, the actor had to convey enough smoothness so that you believe that all of his teachers don’t absolutely hate him. Likewise, Hans has to SEEM like a nice guy to enough people that you don’t spend the whole movie going “uh, this jerk.” Just as it takes a smart actor to play a dumb person, it takes a nice actor to play a mean person. I think Felton’s up to the task.

Luna Lovegood is one of my favorite Harry Potter characters. In both the books and the movies, she’s got a few screws loose but she’s not a one-note joke of a person. She has real feelings and, even though she’s a bit of a whackadoo, she’s smart and brave. Disney-wise, this is Rapunzel from Tangled. She’s not a floaty, sweet gal like Snow White or Cinderella – she’s a weirdo who hangs out with a chameleon. Both characters aren’t socially … you know, off …. by accident – they both had childhoods that meant they couldn’t quite fit in. I get that Alan Rickman is a human person, not a lion. But otherwise, he’s proven that he can play a creepy avuncular villain. (Or, not villain, but admit it, for a while you really thought so!) They could just use those weird costumes from the Broadway musical or whatever.

Stunt casting? Eh, maybe, but who else are they going to get?

Jessie Cave as Those Triplets Who Were All Up On Gaston, Beauty And The Beast

Lavender Brown WAS the Hogwarts version of those hussies who were Gaston fangirls. I know there’s only one of her but they have to make a humanoid monster and dancing cups, I’m sure they can turn one person into three people.

Julie Walters as Mrs. Potts, Beauty And The Beast

Hogsmeade as Belle’s Quaint Village, Beauty And The Beast 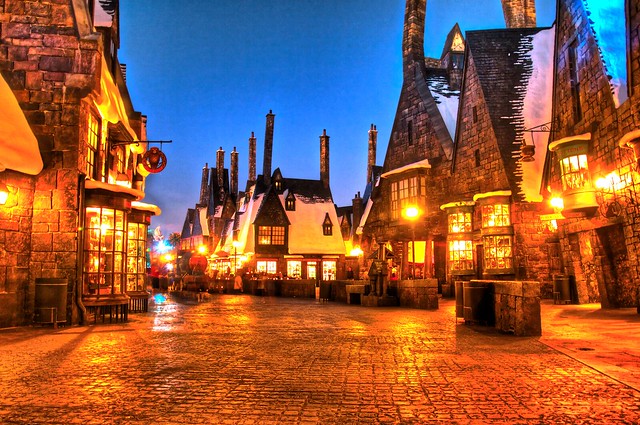