Welcome to Let’s All Decorate, an occasional series celebrating the wacky, tasteless, and all-out amazing home decorating fads of days gone by!

In the late ’80s and early ’90s, my mom loved ducks and geese. Actually, let me rephrase that. In the late ’80s and early ’90s, my mom hated ducks and geese. When a favorite walking trail was infiltrated with Canadian Geese and their human-sized poop, she was livid. We raised baby chickens every year – she was a fourth-grade science teacher – but when a colleague hatched ducks, she didn’t understand (“too dirty”). But like so many middle-class women, my mother loved pictures of ducks and geese, as well as ceramic statutes, cookie jars, and wallpaper borders. It is as though at some point around 1988, all of the moms of the world got together, probably over Snackwells cakes and an episode of Oprah, and decided hey, let’s all decorate with ducks in bonnets.

When I really think about it, the bonnets were the weird part. The “put a bird on it” trend is still going strong, so obviously people like surrounding themselves with the ephemera of avian life. Fine. But those birds are living wild and free, you know, like birds do. The ducks and geese of the late ’80s and early ’90s were adorned like women from yesteryear. I have so many questions about this. Did the birds put the bonnets on themselves – too much sun on the beak, perhaps? And how would a goose make a bonnet? Did a human dress them in clothes, and if so, why? And who was the first person who thought “hey, ducks are kind of cute, but you know what would be way cuter? If they dressed like a lady from the 1800s!”

And this freaking bird, gussied up like she’s about to go a-courtin’ with Gilbert Blythe: Or how about this bird, wearing an apron so she doesn’t muss her feathers while feeding the chickens or whatever: 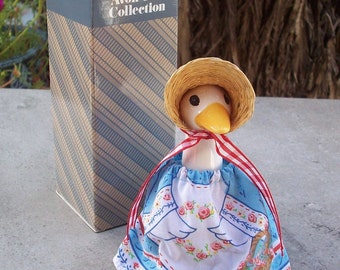 I’m almost positive my mom had these wall-geese: 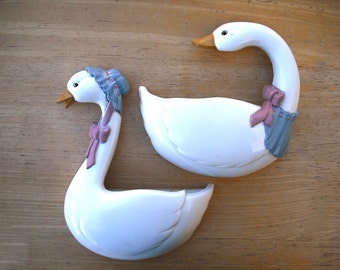 This one goose has a shawl, because she’s chilly: And no kitchen was complete without this cross-stitched goose stuff, so all your goose friends would know that you welcomed them: 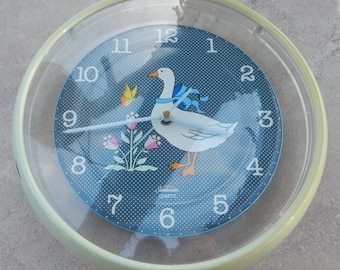 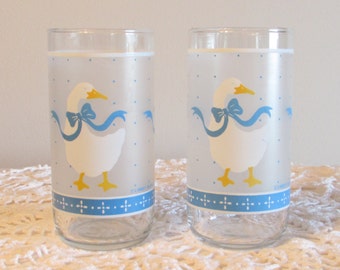 So, what social factors caused the Goose In A Bonnet fad? The trend has an almost perfect overlap with the Bush I presidency (1989 – 1993). Coming down from the go-go, Trump-and-taffeta Reagan era, were we all looking for something a little more homey, a little more rustic, a little more “waterfowl in sungear”? If so, it makes perfect sense that our interest in birds dressed like reenactors at a living history museum died just as the cynical mid-90s sprang to life; that when Gen X came into their own, they brought with them a sense of irony that had no room for geese that look like Hollie Hobbie.

Or was it the international tumult of the time –  Tiananman Square, the fall of the Berlin Wall, Iran-Contra, the Gulf War —  that had us all grappling for stability in the form of ducks outfitted like Strega Nona?
Friends, I think it was none of those things. I think it was pure, all-American bad taste. We talk a lot about all of the neon, day-glo nonsense that was going on 25 years ago, but let’s not forget about pastels. Bathrooms were outfitted with pastel peach and seafoam, with shadowboxes displaying shells and sand dollars. Living rooms had wallpaper borders with pictures of old-timey quilts. While most of the geese are in pale blue – a popular color during the pastel craze – you also see a bit of “dusty rose,” a dirty version of pink that people thought was a good idea.

I wonder if all of our chevron and naked birds and coral-and-teal is going to look as dumb as these Country Geese in 25 years (“Country Geese” is what they were called, and yes, it did take a long time on Google to learn this). I think the answer is maybe. But doesn’t it feel so refreshing to look back and remember a more innocent time, a time when we all said “hey, it’s 1990. The future is now. Let’s all decorate with geese in bonnets?”