I don’t think I’ve ever been one to be all gung-ho about Halloween. Even as a kid, I don’t remember particularly being as excited about dressing up and getting free candy from strangers like my peers. I mean I did it, but I feel like more people were excited about it than I was. In recent years, I’ve opted to go a “lazy” route, in that I either use clothes that I already have or only spend under like $30 to throw together a costume. And they’re usually pop culture inspired. For instance, I went as Liz Lemon one year and even made a fake name tag and Sabor de Soledad bag that I carried around with me. 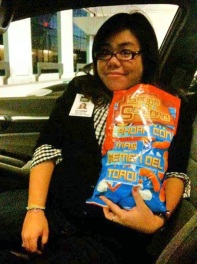 One year I went as a “Friday Night Lights/Dillon Panthers Rally Girl” and just wore the State Champs shirt I owned and wore a yellow ribbon in my hair. This year I paid $15 to buy orange scrubs off Amazon to be Brook Soso from Orange is the New Black, but I also now get catalogs from the scrubs company. Sorry to break it to them, but I’m not even close to being qualified as a doctor or nurse, unless you count 11 seasons of Grey’s Anatomy as something. Anyways, my point is that for those of you who are ‘meh’ about Halloween like I am, it might be easiest to get inspiration from the Halloween eps on TV. Luckily, I’ve compiled a list of some of the best costumes worn by our favorite characters on TV, and maybe you’ll be gung ho about Halloween once and for all.

I always sympathized with Jim since he never wanted to dress up, but made a little effort. This might be my favorite one of his costumes. Andy, dressed as one of the Cats from Cats in full garb, asks Jim what he’s supposed to be, and Jim simply points to his name tag and says, “I’m Dave.” 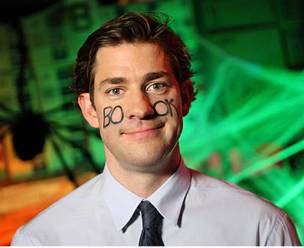 You can have him either way – as plain white Jim or 3 hole punch. Paper jokes for paper folks.

Because why wouldn’t you have a paper mache version of yourself sitting on your shoulder as a “costume”?

One of the things I love about Michael Scott is that he tries so hard to be cool and hip, but he’s always just a step behind. It’s endearing. He dressed up as SNL’s MacGuyver-esque character MacGruber one year. Unless you’re a hardcore SNL fan, you might not even know who he is (or that Will Forte brought his alter ego to the big screen). But Michael Scott didn’t care, and just assumed everyone would know who he was. Bless.

Troy Barnes as a sexy vampire

It doesn’t matter if he’s Dracula or not – he’s a sexy vampire. Lawd help me. 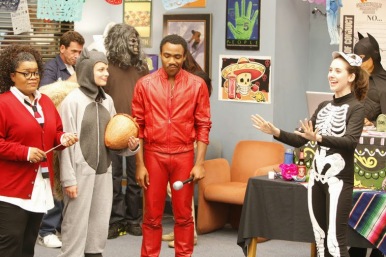 How dare you think Chang is Michelle Kwan. Or Kristi Yamaguchi. RACIST!!

Jessica Day as a Zombie

To make ends meet, Jess is forced to take on odd jobs, including one as a zombie in a haunted house. However this particular outfit has Schmidt likening her to a Zombie Woody Allen. “These brains are terrible, and in such small portions.”

Since college, Marshall, Lily and Ted had been dressing up in some sort of theme costume together – salt and pepper and cumin, Lady and the Tramp and their bowl of spaghetti, Lewis and Clark and their canoe. They go all out. With Ted going  as Hanging chad (see next slide), Marshall and Lily decide to go for the gold with this Pirates of the Caribbean costume and ended up getting first place. Spoiler alert?

Barney Stinson as a Fighter Pilot

You know that Russian satellite Sputnik? Well I’m a potato which is a spud and I have my antennas.

Ugh. Ross is so underrated.

Penny Hartz and Max Blum as mom and baby

“I wanna be your wing baby”, Max says to BFF Penny. However they run into a problem when they both start talking to men they’re interested in. Hilarity ensues. Sigh. Miss you show.

Modern Family has set a precedent for really good Halloween episodes, and it usually involves Clare being really into it and Haley dressing up as something sexy. This is no different.

Mindy Lahiri as Lil Wayne on the Prairie

I appreciate that Mindy Lahiri made an effort to be creative in that she had a string of ideas whcih involved a mashup of characters, including Tinkerbell Tailor Soldier Spy and Dirty Harry Potter. But my favorite is Lil Wayne on the Prairie. Mainly because she looks badass with those dreads and grill.

Morgan Tookers as a Urinal

If you haven’t seen this before, I feel like there’s really no explanation for it. You just need to see if for yourself.

Olympian Lolo Jones made her debut the summer before this episode aired, and Rashida kept getting comparisons to her, so clearly the brilliant writers decided to add it on the show. Leslie/Amy as Rosie is a natural choice, no?

Again, Tom as T-Pain is a natural fit. I feel like Tom thinks he’s T-Pain 24/7 and Halloween is an excuse to just dress up like him. 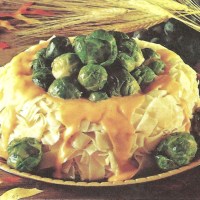 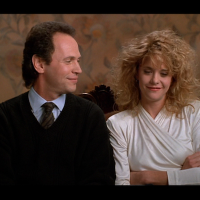