One of the earliest lessons of childhood is that certain animals don’t belong in your house. This message was reinforced everywhere. In the American Girl books, Kirsten’s house got destroyed because she brought a baby raccoon inside and he went HAM and burned their house down using his tail as a tiny torch of destruction. Children’s books teach lessons, and I guess the American Girl company thought that “don’t bring weird-ass animals into your house” was still a relevant one in the early 90s. In that one Full House episode, Danny’s heretofore-unheard of sister showed up with her monkey and it got lost. There are even real-life community standards against owning odd-as-shit animals:  the family on my street with the ferrets were treated to open scorn, because ferrets were illegal in our parts. Besides, those animals were little weaselly assholes.

Despite these lessons, some people just don’t get it. Remember a few years ago when that guy owned a menagerie and he set them free and they all got shot? Or that woman whose face got mauled off by her friend’s chimp? Sure, she got a face transplant, and I’d say all’s well that ends well, but there’s somebody else’s FACE on her FACE now and I’m not ready to act like that’s okay.

Here are some famous pet owners who should know better. But since they don’t, I’m here to tell them: you’re bouts to get killed by your exotic pet.

Mike Tyson: You’re Bouts To Get Killed By That Tiger

Recently Mike Tyson got head butted by his pet tiger. The cork at the top of this champagne problem? It knocked the gold teeth right out of Tyson’s mouth. Still, the fighter has reported that he sleeps with his tiger, answering the question posed by the 90s tv movie “Mother, May I Sleep With Danger?” with a resounding YES.

Kristen Stewart: You’re Bouts To Get Killed By That Half Dog/ Half Wolf

The only surprising thing about Kristen Stewart owning a dog/wolf hybrid is that I can’t imagine Kristen Stewart caring enough to go out and buy a dog/wolf hybrid. I sort of picture her out on her porch smoking weed with a dog/wolf watching her longingly from the side of her yard. She turns to go in and the dog/wolf is at her heels. Stewart looks at the dog/wolf, shrugs, and lets him in behind her. They live apathetically ever after. Until he freaking KILLS her because that is a WOLF Kristen. It’s a wolf. And in real life, wolves don’t turn into handsome muscular teenage boys. They turn into a thing that is eating your still-living flesh.

Justin Bieber: You’re Bouts To Get Killed By That Capuchin Monkey

Justin Bieber bought a Capuchin monkey, abandoned it in Germany, then was ordered by the nation of Germany to pay monkey support. If there’s one country that I would NOT want to get into a child support relationship with, it’s Germany. They’re stern. That, or one of those countries that people always parental-kidnap their children to. Now Bieber’s monkey is a stern German, too. Plus monkeys are crazy. Watch your back in Berlin, Biebs. That Capuchin monkey is going to revenge kill you.

Nicolas Cage: You’re Bouts To Get Killed By That Octopus

Octopuses are kind of cute. Until they squirt ink in your eye and strangle you with their tentacles. Before you know it, the last thing you see before you die is the undercarriage of an octopus. And the only time that should be the last thing you see is if you’re an old, married octopus having an affair with a young female octopus and you have a heart attack during octopus sex and that’s how you die.

Melanie Griffith and Tippi Hedren From The Past: You’re Bouts To Get Killed By That Lion 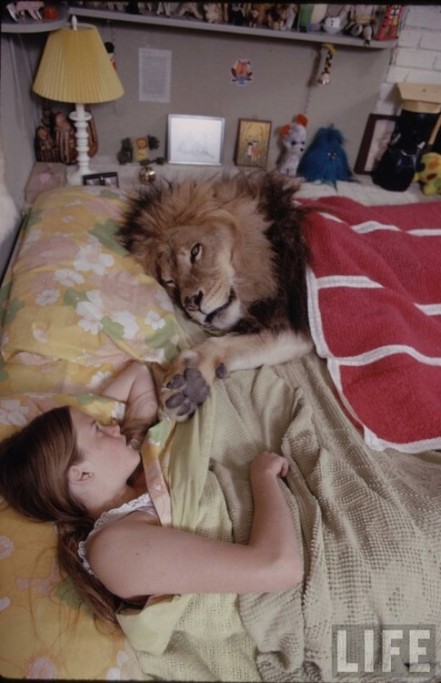 In the Wizard of Oz, there’s a good reason that the song didn’t go “Lions and Tigers and Bears, You Know, Those Would Be Fun To Have Live In My House With Me.” The Griffith-Hedren clan loved a good lion photo op. Lions in bed with the child! Lions roaring at us in the pool! Lions taking up too much space on the kitchen floor as the maid gets juice from the fridge! Only by the grace of God was the final photo op not “Lions Eating All Of Us With Their Enormous Bone-Crushing Jaws.”

Tracy Morgan: You’re Bouts To Get Killed By Those Sharks

I saw that movie Soul Surfer. It made getting your limb torn off by a shark seem normal, inspirational even. But I ALSO saw that movie Sharknado, so I know that Sharks could kill you – and the fact that sharks live in water, and you’re on land, doesn’t help you. Some day, that tank is going to break and then Tracy Morgan is bouts to get killed by that shark.

Michael Jackson From The Past: You’re Bouts To Get Killed By That Chimpanzee

It’s all fun and games until a chimp eats your face and you have to raze all of your original facial features and rebuild them and regrow your skin in goodness knows what color. Actually, you know what? Never mind. As you were, Mr. Jackson.

Vanilla Ice: You’re Bouts To Get Killed By That Wallaroo

A wallaby/kangaroo hybrid sounds like a really cute pet, right? Especially when you name him Bucky Buckaroo, like Vanilla Ice did. But you know how you get a little nervous when a large, friendly dog jumps up on a tiny person because it could knock them over? Imagine if instead of a large, friendly dog the jumping animal was a mutant kangaroo. Vanilla Ice, you’re bouts to suffer extensive head trauma when that wallaroo knocks you over.

Audrey Hepburn From The Past: You’re Bouts To Get Killed By That Baby Deer

Whenever I find myself looking a little TOO Etsy-and-twee, I think to myself “girl, you look like you would have a pet baby deer that you feed out of a mason jar. And that baby deer only listens to vinyl. Shit. That baby deer wears a loooot of ModCloth.” Sure, a tiny fawn seems like the perfect Manic Pixie Dream Pet. However, those of us who live in deer country know how un-cute it is to get a deer-sized dent pounded out of your car. Audrey Hepburn from the past is bouts to get into a driveway crash because of that fawn.

Steven Tyler: You’re Bouts To Get Killed By That Raccoon