The reunion issue of Entertainment Weekly came out last week, and we got to see what the casts of Bring It On, Felicity, Family Ties and more are up to now. This issue is one of my favorite annual issues from EW, especially when they cover shows or movies I’m particularly interested like Gilmore Girls or Clueless or The West Wing (have you SEEN the vid of Bradley & Janel talking about present-day Josh & Donna?!). There are of course millions of things to choose from when it comes to narrowing it down to a few for each issue, but I too have hopes and wishes for future get togethers by some of my (used-to-be) favorite stars. Here are just some of them.

Before Zack and Slater in California, there was Zack and Mikey in Indiana. The latter lasted approx one season, but thanks to the magic of syndication, the 14 episodes were rolled into repeats of Saved by the Bell. This explains why as a kid you saw two middle schoolers – Mikey and Nicki – suddenly turn into high school Slater and Jessie. Call it The Tori Complex, if you will. While we know Zack, Lisa and Screech and even Mr. Belding went on to find fame with SBTB, the actors who played Mikey and Nicki, Max Battimo and Heather Hopper, didn’t quite reach that level. Even Miss Bliss’ teachers Miss Tina Paladrino and maintenance supervisor Mylo Williams had few roles here and there. I think the reunion, more than anything, would be to ask the question – what went wrong with this show? When we were growing up in the 90s, Julia Roberts was (and arguably still is) the Queen of Romantic Comedies. After seeing My Best Friend’s Wedding for the first time, I became obsessed both with her and the movie, and when Notting Hill came along, that became my favorite. Like, I have it on VHS currently in my room and have seen it way too many times to remember. Pairing Julia with the King of Romantic Comedies, Hugh Grant, was a no-brainer and they had great chemistry. It also stars a young Mischa Barton, Alec Baldwin AND his 30 Rock frail-boned co-star Emily Mortimer, and the dude from The Wire. But it’s also the first introduction I had to Hugh Bonneville aka Lord Grantham on Downton Abbey, as Bernie, Hugh/Will’s friend. He has a very understated comedic charm to him we don’t get to see as much on Downton. 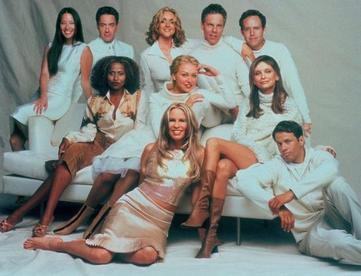 Most of the Ally McBeal cast reunited at the TV Land Awards earlier this year, but I want a full get together with Robert Downey Jr., Jane Krakowski, Lucy Liu, Taye Diggs and Portia De Rossi, otherwise it would be for naught. Also, didn’t know until right now that Renee Elise Goldberry of Hamilton fame played one of Vonda Shepard’s backup singers in the bar throughout the entire series. BRAND NEW INFORMATION. She should be invited to the reunion too.

Ed, the show about a big town lawyer who moves back to his small hometown and becomes the owner of a bowling alley. This show ran for four seasons and through the entirety of my high school career. I loved this show, but like most programs I watched back in the day, I wasn’t necessarily the target demographic. None the less, the show was a lovely dramedy with sort of a Gilmore Girls vibe. It also produced stars like Modern Family’s Julie Bowen, Michael Ian Black, and a young Justin Long and Ginnifer Goodwin (again, learning so much. I forgot she was in Ed, but very clearly remembered their scenes together in classic He’s Just Not That Into You). Most of these actors have gone on to do great things, but like, where’s Lesley Boone/Molly? Jana Marie Hupp/Nancy (SHE WAS MINDY IN THE ONE WITH BARRY AND MINDY’S WEDDING #COPACABANA).

I was introduced to Rent when I was approx 13 years old, around the time Rent first hit Broadway. I’d listen to the OBC soundtrack on repeat, and for sentimental reasons, is still one of my favorite musicals. Despite getting together for the polarizing movie and the 10th anniversary show, I will always be available for this OG cast to get together once more. Especially Taye and Idina.

Speaking of musicals, Newsies was a childhood staple for many kids my age, and starred a young Christian Bale before he became Batman. If I could just get a current group picture of everyone in this cast in the exact same pose, crutch and all, that would be fantastic.

It’s like a given we would all like a reunion of Six Feet Under, so that aside, he’s another addicting show Peter Krause was a part of. I binged this a few years ago when it was still on Netflix Instant, and I don’t even remember why. Maybe it was Peter I was intrigued by. Then again it was also Donald Sutherland, a girl from Passions, Lucy Liu (again) and William Baldwin. This would be a fun reunion, specifically because it was cancelled after just two seasons with a total of 23 episodes. What happened to this Darling family??

Studio 60 on the Sunset Strip

Is Studio 60 polarizing, too? Probably. Did I watch it because I appreciate Matthew Perry? Of course. Did I expect to like it so much that I bought the DVDs? Absolutely not. Studio 60 had some problems with it, of course, but all the cast members were extremely talented and made the show watchable. Also, Columbus Short, aka Harrison from Scandal was on it, along with Dawn from the British The Office, and it’s weird seeing them not as the characters you most associate them with, despite the fact Scandal came after this show. Anyways.

Molly & I didn’t even go to our own high school reunion, so I can’t say I entirely expect the cast of Laguna Beach to take part in a reunion. However, it would be itneresting to see what’s changed dynamics wise. Is Kristin still mad at ‘Stephennnnn’? Does Stephen pine for LC at all? What happened to Christina’s Broadway dreams? Is Trey still the best human on the show (besides LC)?

That Thing You Do

In addition to renting this movie on VHS, for some reason, That Thing You Do! was constantly, or what seemed to be, on repeat on VH1. It wasn’t a blockbuster in the box office, but it wasn’t a flop either. What it does have is a strong, passionate fan base who will be able to sing the titular track for you at a moment’s notice. They’ll know the different between The Wonders and The Oneders, and know how to pronounce the latter. They’ll also want to get the band back together one more time.

And one final segue – SPEAKING OF BANDS GETTING BACK TOGETHER – I’ve spoken about this before, but as a young lass, I was a teenybopper to the max. BSB was my jam, and that love of boy bands extended to pretty much everyone (except ‘N Sync, duh), including the fake boy band put together on MTV to mock the genre. That ultimately backfired since they had a ‘hit’ song with U+Me = Us (Calculus) and their follow-up hit, The Hardest Part of Breaking Up (Is Getting Back Your Stuff). Both their albums made it into the Billboard top 40, including their sophomore record, 2Ge+her Again, which hit 11. While it wouldn’t be the same without the late Michael Cuccione as part of the reunion, it would be great to see them 2GE+HER AGAIN.