I was mighty incredulous about The New Normal. It seemed too much like it was riding the coattails of Modern Family – like network TV had just realized that people had weird family arrangements or, you know, that gay people actually had families, and they were really gunning for it. I definitely gave this a bit of a side-eye when NBC gave it a promo spot during the Olympics. I felt like if they had to try that hard, it wasn’t going to be very good. I also felt like this was the two weeks every four YEARS that I watch sports, so they should just show me the goddamn swimmers already.  Happy to say, I was mistaken – it is actually worth watching. Here’s why: 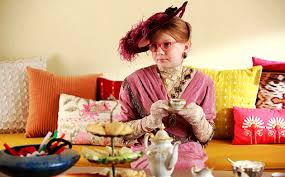 I know child actors are frequently the worst part of the show, but Bebe is oddly hilarious. The reason this quirky kid character is so funny is that the writers actually abide by the “show, don’t tell” rule. Instead of having the adults comment on how “offbeat” the kid is, they have her doing these amazing impressions of Little Edie Beale and the Dowager Countess. Her glasses aren’t prescription. She writes Charlie Rose fan-fiction. And best of all, while Shania isn’t a perfect kid, she doesn’t fall into the bratty sitcom child trap. Thank goodness.

I like to imagine that they’re IRL besties, too.

Things got off to a rough start between TV producer Rocky (NeNe Leakes) and uber conservative/former Ohioan/World’s Youngest Great-Grandmother Jane (Ellen Barkin). See, e.g.: “The last time I checked this diamond speckled watch my gay boss bought me, without his consent, it was 2012. Now, why don’t you take your Callista Gingrich hairdo and your racist mind back to the past, or the south, where they belong?” Of course, the producers didn’t leave us hanging too long, and by the second half of the season we got to see these two (sort of) join forces, largely because of a shared dislike of the same things and people.

Goldie (Georgia King, who is Scottish?!) is a gestational surrogate with a heart of gold. She is also younger than me, I just realized, which is BANANAS, but probably doesn’t matter to you. She’s a former teen mom who is acting as a surrogate to raise enough money to go to law school. And to think all I did was take out a few LSAT books from my college library. She, Bryan (Andrew Rannells), and David (Justin Bartha) become one of my favorite friend-families on T.V. right now. You get the feeling that even if she didn’t need the money, she’d still help the guys start their family, and that even if she wasn’t carrying their baby, Bryan and David would still do what they could to help her start her career and take care of Shania. I can’t wait to see how this family develops after the baby is born.

The Wacky but not too wacky plot lines 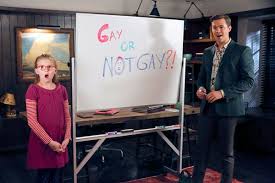 With its fairly involved premise, this show doesn’t really need to go to extreme on the plot lines. Almost everything is plausible, and some lean toward the classic sitcom setups — but if you want a mindless half-hour of tv that doesn’t change the face of sitcom television, this is it. A few favorites: the group goes gadget-free, causing Shania to get a little too into Pilgrim character; Tofurkey causes Thanksgiving dissent; a babyproofer apparently hates fun and Christmas.