Attention kids girls of the 90s: LISA FRANK IS A REAL PERSON. AND SHE HAS A FACTORY IN TUSCON, ARIZONA. 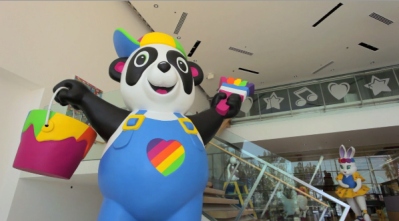 And that factory, which used to be a bustling mecca for young girls who only dreamt in technicolor, is now a concrete mirage in the middle of the desert with only six employees.

Of course, if you were one of those kids who totally gave in to the lure of multi-colored, fantastically designed trapper keepers and folders that made absolutely no sense at all you know how popular her items were when you showed up at school with her products.

But over the years, LF slowly became items you would wax nostalgic, partly because there were other designs that became more popular and partly because we reached college and didn’t (necessarily) need her assistance anymore.

Last year, Urban Outfitters deemed it ‘vintage’ enough to bring it back to life, and reintroduced a bunch of LF items into their stores. From t-shirts to folders, to notepads and stickers, the hipster company showed a whole new generation of kids how cool this company was – is.

They even visited the factory for a behind the scenes look at the headquarters, but for some odd reason, Lisa wanted to keep some form of anonymity…

So after watching this, I was a little confused, uncomfortable, disappointed in what I just saw. First of all, Lisa is a self-professed ‘lunatic.’ Okay. Second, LF designs make me feel happy, upbeat, euphoria in a sense that I imagine only users of acid or ‘molly’ feel. This factory seemed stark, cold, perhaps even under some insane dictatorship to Frank herself. The whole thing was unsettling.

Upon doing more research (and reading the most depressing article ever), I discovered that this was not always the case. Back in its heyday, the company employed around 350 people. And it went down to six over the course of a year. LF fans who traveled to Tuscon just to see the inside of this ‘magical place’ could even go on a tour of the factory – until about a year and a half ago. There isn’t even a receptionist in the lobby to great you with rainbows and butterflies – only a telephone with instructions that will direct you to an actual human being.

Lisa Frank herself, in 2003, still with a smile on her face, still allowing people to see her face.

Apparently, most of this downfall stemmed from Lisa’s divorce from her husband/co-business partner in 2005. She sued him, and a series of other legal problems hit her in the following years. Unfortunately, it’s still ongoing, but Lisa is still standing with her company.

It’s obviously a sad turn for a company I revered as a staple of our generation’s childhood, but of course this story is all too common with organizations with ‘fad’ items such as these. But who knows. Everything that is old becomes new again, right? Lisa Frank always seemed like a positive company to me, so why not keep looking at it that way? Maybe there’s still a glimmer of hope that those factory doors will open once more, and we can show our kids just how cool those tap dancing bears and golden retrievers were, not just when we were growing up – but for their childhoods too.