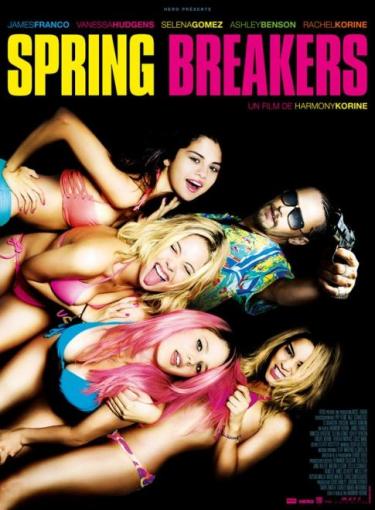 When I first saw the trailer for Spring Breakers, the thought that immediately came into my head: ‘shitshow.’

And to some effect, I still maintain it is after seeing it, but in a sense that the characters themselves are a total, complete mess.

If you don’t know what this movie is about, really all you need to remember is that it’s about 4 BFFs who go to Florida for spring break, and insanity ensues – especially after they meet this drug lord/rapper. There’s drugs, sex, alcohol, guns – not for your regular Disney Channel fan.

I saw the movie a couple weekends ago when it opened, and Harmony Korine, the director, surprised the audience by coming in right before the movie and talking about it for a little while. Korine, flanked by the “ATL Twinz” from the movie, said to ‘keep an open mind’ about the film, which is what I did – and suggest you do too. 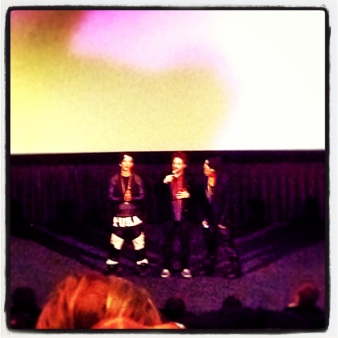 please note the twin on the left, whose backwards pants say ‘FUKK’

After the 90 minutes of neon lights, dubstep music, and the alarming gunshot sounds signaling a scene transition, I had to take a few minutes to come out of the Spring Breakers world and back into reality. I didn’t really know what to think, to be honest. It was exactly what I thought it would be, but so much more than I could have ever imagined. If I had to sum it up in one word: jarring. The very first scene you see (and I’m not spoiling anything here) is a bunch of real life college kids on spring break. They’re dancing on the beach, half naked, drinking excessively with funnels in tow, and it looks like something out of Girls Gone Wild. With that scene alone, you’d think the entire movie is just about these four girls engaging in illegal activities, but come to find out, the Girls Gone Wild scene is way tamer than the shit they get themselves into.

The first half of this movie shows the girls trying to figure out a way to procure enough money to travel from their lame college life in Kentucky, down to a place that is far more exciting – Florida. A couple of them violently rob a restaurant for the cash, and they make their way down to the Sunshine State, where the R-rated partying ensues. Unfortch, the police bust the motel party they’re at, and the ladies land in jail. In their bathing suits. Luckily, James Franco’s character, Alien (Al, for short), comes to bail them out. The second half of the movie is the group trying to figure out if he really wants to help them or if he has ulterior motives.

A couple things hold me back from saying this was a great, amazing, top notch movie. One, I don’t like violence in films. Per a previous post about never having seen Kill Bill, Pulp Fiction, any Quentin Tarantino movie really, is because I am just not a fan of guns and blood and violence. All those things happen in this movie. The other reason is that it’s hard to pin down what this movie was set out to be. It definitely had its serious moments, but it also had its fair share of comedic ones as well, and not intentional comedy. When James Franco first comes on the screen, he looks like this:

And then he speaks and it’s hard to NOT laugh at him. Because all you see is James Franco looking like a complete idiot. I don’t think that was the original intention, but I find it hard to believe any viewer wouldn’t think that at first sight. The ridiculous monologue he has about “all his shit” is a perfect example. He’s going on about all the money, guns, and paraphernalia he owns, but there’s a part of me that says, ‘am I supposed to be taking this guy seriously or not?’

My favorite scene, which kind of falls into the category of ridiculous dramedy, is a scene involving the girls, James Franco, a piano, guns, and one of Britney Spears’ all time hits. In fact, someone actually wrote an article about how the entire movie is a metaphor for Brit Brit’s life, which frankly is a theory I can get behind.

Now I have NEVER experienced a spring break like these before, and I think most college grads can agree. The most I ever did was go to LA and visit my friends, where we went on a tour of Warner Brothers studios and sang karaoke at Mr. Belding’s bar. But I know that these people actually exist, which is why this movie is not that far off from the truth. Sure, meeting a guy like Al is extremely rare, but this culture exists. The bottom line is that it exists, people, and that’s why this movie isn’t taking advantage of girls in bikinis and ripping away the innocence of young Hollywood starlets. While I can totally understand how you would think that, you have to realize that this is not a porn movie. It’s not meant to exploit people for your pleasure. It’s meant to explore a culture of young adults looking for something more than what they have, and more than what they are. Wanting to escape the mundane world they’ve known all their lives, in search of something more exciting. A need to have experiences they probably won’t have ever again. If you are sane and have a good conscience, hopefully you’ll take away that this movie is the exact OPPOSITE of how you should act, and not a how-to instructional video. In fact, all the naked girls and sex scenes in this movie should turn you off, not on.

This review from Boston.com is an accurate description of how I feel about Spring Breakers, and explains the reason why I even took time out to write this post in the first place. This film won’t win any Oscars, but it will certainly be a talking piece for anyone that sees it. It stays with you. And isn’t that really what filmmaking and creating art is all about?

This is the rare movie that I actually found myself liking more the longer I spent away from it and the more I thought about it — mainly because I couldn’t stop thinking about it. In the moment, I found it numbingly repetitive, even boring at times: an obvious juxtaposition of sex and violence, of dreamlike aesthetics within a nightmare scenario. And it is all of those things. But it stuck with me, and it made me appreciate the genius of Korine’s approach.

So friends, if you see this movie, remember to keep an open mind, and most importantly remember: Spring Break Forever.