Well, we’ve reached the halfway point in the TV season, and it’s when networks usually introduce new shows to replace the sucky ones they cancelled. One of the standout shows from this bunch of mid-season replacements is NBC’s About a Boy.

The show premiered after the Olympics, which is a tactic that NBC has devised before – they did it with Go On last year, which unfortunately was cancelled after one season. To prevent About a Boy receiving the same fate, how about we all give this show a try and keep it on the air for just a little longer.

“Successful songwriter and bachelor Will Freeman lives a carefree life as the “ultimate man-child”. His perfect world is turned upside down when single mom Fiona and her 11-year-old son Marcus move in next door.” It’s also worth noting that if this title sounds familiar, it’s because it was based on the 2002 movie with Hugh Grant, which was based on the 1998 novel by Nick Hornby.

Reasons Why You Should Watch

Damnit Katims, you did it again. Producer/Writer/Director extraordinaire, Jason has created some of the best (and also some of my favorite) shows over the past few years, including Friday Night Lights and Parenthood. Jason has a way of creating characters you care deeply about, scenarios that could actually happen in real-life, moments of hilarity and of course moments of non-stop crying. That’s what makes each of his shows so special there’s a quality that you can feel from the pilot – it has heart. That’s surprisingly hard to come by in television these days, but thanks to Katims, I can count on his shows to make me feel all warm and fuzzy inside while still wiping away tears from my face. About a Boy is no different. Will and Marcus form a quick bond throughout the 22 minute pilot, but you can tell that they’re changing each others’ lives in such a short amount of time already. Whether you’re an 11 year old kid who’s new in town or a loser of a guy in his 30s, the show seeks to prove that your life can change when you least expect it, when you don’t think you want it to and in the unlikeliest of places – but you wouldn’t want it any other way. 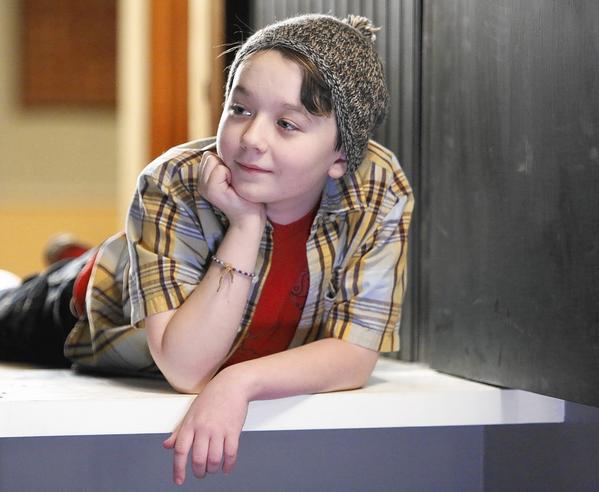 Benjamin Stockham plays young Marcus, a delightful young boy who, along with his mom played by Minnie Driver, move to San Francisco right next door to Will. Minnie’s a vegan hippie sort and Will, a meat-eater, is just trying to fit in at school. But le tme tell you, this kid’s acting and comedic timing is off the chain. He’s only 13 years old, but could easily be 40 if you told me he was. He’s not one of those annoying kids you see on TV (or in real life), he’s someone you want to cheer for and possibly hug whenever you get a chance. I also had to look up his past credits and guess what – he was in the gone-too-soon comedy, 1600 Penn alongside Josh Gag, Bill Pullman and Jenna Elfman. And he was great it that too, but 10 times better in this.

Parenthood is where this whole crossover thing took it to the next level. Katims was all, ‘if it ain’t broke, don’t fix it and hire the same actors from my Emmy award-winning show to be on my new show.’ So you know, he made his calls and throughout the course of all the five seasons, FNL stars like Minka Kelly, Michael B. Jordan, Matt Lauria, Jurnee Smollett and Derek Phillips have all been on the show (not to mention Jesse Plemmons’ return as Landry on this FNL/Parenthood crossover that blew my mind). That being said, it’s inevitable to have FNL and/or Parenthood folks on About a Boy. Case in point: it has already been announced that Adrienne Palicki (good old Tyra on FNL) will have an arc on the show as one of Will’s love interests. Plus, David Walton (Will) has already been in a recent episode of Parenthood as one of Crosby’s (Dax Shepard) poker buddies. It helps that both shows take place in the bay area, because Crosby’s going to be in an ep of About a Boy too. TV nerds celebrate the crossover magic!

No book, No movie, no problem

As I previously mentioned, About a Boy is based on a book which was based on a movie. Now if anyone’s up for the task of adapting something that’s already been adapted before, it’s Jason Katims. He did it with both FNL and Parenthood, but managed to keep the story going on season after season. In the pilot of About a Boy, fans familiar with the book and movie will find it similar to what they already know about the story. Will and Fiona (Minnie Driver) immediately hate each other, he has a lot of women coming in and out of his boudoir, and there’s even a big talent show featuring Marcus at the end. But that’s it. You don’t need to have seen the movie or read the book in order to enjoy the show. I’ve only seen the movie and I saw it around the time it first came out, so I clearly have no recollection of anything that happened, besides the fact that Hugh Grant befriended Nicholas Hoult aka Mr. Jennifer Lawrence. So no need to fret if you’re unfamiliar. You’ll fall in love with these characters and will be genuinely interested in their lives as the series goes on, and you’ll completely forget it was based on something else in the first place.

7 thoughts on “Show You Should Be Watching If You Aren’t Already: About A Boy”