So, we lost. I’m no soccer connoisseur, but I’m pretty sure it’s still a shock that we made it so far into the World Cup. It was exhilarating for the like, two weeks we were in the thick of it, as people who usually don’t care about professional soccer were suddenly into it for the spirit of AMURRICA.

And now that we’re out, we have to deal with the depression that comes once the reality of losing settles in (and what exactly we’re going to do with that Tim Howard Shrine). And to pour salt in the wounds, the loss came just days before the most patriotic day of the year. So to help you deal with one of the most bittersweet Independence Days you’ll ever celebrate, here are a few things to do today to help you get over the World Cup loss.

Watch and recite the speech from Independence Day

It doesn’t matter if you’re Democrat or Republican, one thing we can all agree on is that Bill Pullman as fake President of the USA is one leader we can stand behind, especially after this rousing speech before they fight all the aliens. You know, it sounds ridiculous once I type it out like that. But if you don’t stand up and clap in the name of America after this, you should probably check your citizenship at the door.

In one of those Buzzfeed articles, it showed people from around the world holding ‘American parties’ and in almost all of them, they are drinking out of red solo cups. I didn’t realize it until reading the listicle, but why DO we use these cups at every college/drinking party, both portrayed on screen and IRL too? Either way, the rest of the world is right, we use these brightly colored cups to excess and drink your soccer cares away today/this weekend – preferably with a cheap American beer.

Democracy – we got it! Also we have these awesome ‘I Voted’ stickers that you get after said voting, and these are the exact ones I got in LA that have different languages around the perimeter, including one in Filipino!! What up diversity!

Wear all the American flag things

As I found out last year, apparently any article of clothing with the flag printed on it is actually a flag. Like it should be treated the same as a real flag, according to the U.S. flag code. Basically, we’ve all broken the code. Oops. Maybe you shouldn’t go all out like Katy Perry (but I mean, good on ya if you do), but prove to the enemy that we stand strong in the face of adversity and don’t let those colors run (lawdd).

Eat your weight in hot dogs

Every 4th of July, iconic hot dog company Nathan’s Famous holds the Nathan’s Hot Dog Eating Contest, in which contestants shove the meat into their mouths at rapid pace and whoever eats the most gets fame and fortune (a bejeweled mustard belt), because, America. 30-year-old Joey Chestnut (pictured in the center) has won every year since 2007, and last year he even beat his own personal record of 69 hot dogs in 10 minutes. Needless to say, you don’t want to hang around the 10:01 mark unless you want to lose your appetite.

Just eat all the foods

Our friend Renee relocated to the Netherlands a couple years ago, and she held her own American Thanksgiving at her house for her Dutch friends, and made all the fixins, from mashed potatoes to sweet potatoes to vegetables to the obvious large turkey – and he Dutch pals kept questioning why she made so much food for such a small group of people. Because, you do. But WHY they asked. Just make less of it. NO. That’s not Thanksgiving, that’s not America. We’re known for our entirely too large portions and nothing helps you beat stress better than with just piles of food. And alcohol. But mainly food.

Spend too much money at Wal-Mart 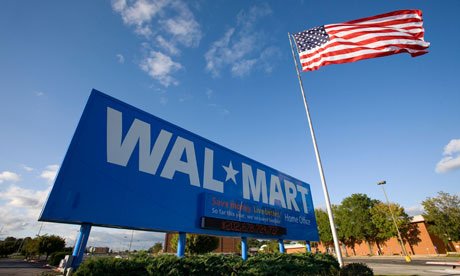 Ah, Wal-Mart. Where the items are dirt cheap and so is the employees’ salary (allegedly). If you want to see America at its finest (and also a good reminder that your lives could be worse), all you need to do is go to the People of WalMart site and feel better about yourself, while at the same time disgusted for our society as a whole.

Ever since the 18th century, baseball has been “America’s Game”. There’s nothing more patriotic than going to a ball game, eating some peanuts and cracker jacks (and possibly a hot dog – too soon?), and hearing the National Anthem sung by a local singer who never made it big. Plus, you’re probably already into baseball anyways, so just focus your attention from soccer back to baseball.

In addition to baseball, Americans love a good game of football. I mean the Super Bowl is like the biggest non-official U.S. holiday. It’s the second largest day for food consumption in the country and also the most watched television event every year. While the last game of the U.S. match in the World Cup did get huge ratings for ESPN – it’s nothing compared to the over 111 million viewers of the Super Bowl.

Basically play any other sport except soccer

I’m not saying you should NEVER play soccer – but maybe in the interim of your depression, just try a new sport that hasn’t taken off the ground in America yet. Like table tennis, perhaps. This sport is huge in Asia! It even is an official sport at the summer Olympics, so that’s gotta count for something!