Happy 2015, everybody! The start of a brand new year is always a happy, hopeful thing – but as you get older, the passing of time can also make you a little blue. As you get older, you are also more and more likely to spend New Year’s day holed up in bed, watching Netflix and eating whatever your go-to hangover foods are. This didn’t used to happen to us. Anyway, these are all of the pop culture moments that make us cry, on a scale from one to five Crying Dawsons, in case your plans for the day include a lot of media content and a little crying.

Some pop culture moments are engineered to make you cry. Any time they show you an old man who is alone, or a beloved dog bravely facing his mortality, you know they’re trying to make you bawl.

Others aren’t supposed to be sad, but for some reason they grab onto your feelings and twist them until your eyes water. For instance: any time a child sings and it’s very beautiful.

Then there are those moments that were meant to be sad, but came out hilarious instead. I present for your approval:

This is the rare tearjerker scene that makes us weep – because we’re laughing so hard. So with Dawson Leery as our patron saint of pop culture crying, we’re listing those moments in entertainment that brought us to tears. Our scale stretches from one Crying Dawson (your eyes are lightly watering, but there’s no real tearstorm) to five Crying Dawsons (or as we like to call it, a Full Leery). And disclaimer: there will be spoilers ahead. Consider yourself warned. 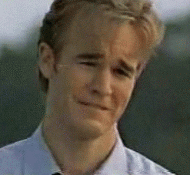 One thought on “Best Of C+S 2014: Pop Culture Moments That Make Me Cry”