Ah, the Founding Fathers. They gave our nation its principles of life, liberty, and the pursuit of happiness. They also gave it style. So much style.

My first foray into Founding Fathers fashion was when I tried to use dry shampoo. Rather than combing out easily and leaving me with bouncy, shiny but not greasy-shiny locks, it clung to my hair like a white powder. I looked like Thomas Jefferson. Which is to say: amazing.

I leapt headfirst into Colonial Cool when I tried to wear slim-fitting Bermuda shorts even though I am 5’2 and should know better than to have dreams. They looked like old-timey breeches. Paul Revere wished he looked so good in knee-pants.

I haven’t accidentally worn a tricorne cap yet, but I’m sure it’s coming.

This weekend we celebrate Independence Day, and many will deck themselves out in tacky American Flag gear – because you don’t really love your country unless you turn Old Glory into a pair of hotpants or a bandana. It’s also the one time a year when we – well, some of us – look forward to History Channel and PBS documentaries about our nation’s earliest days.

And I say, why not combine those two passions: caring about history for a little while every year, and dressing like an all-American reject? Why not take our fashion advice from the golden age of elaborate men’s fashions? This July Fourth, ask yourself: what would John Hancock wear?

Anyone who’s anyone in the 18th century wore a powdered wig. They knew the secret that George Clooney and Roger Sterling brought to modern times: the most beautiful creature in the animal kingdom is a silver fox. Look at Thomas Jefferson’s snow-white locks – so natural and free! Or John Hancock, whose wig isn’t even pretending it’s not a wig:

So how will you recreate it? If you’re like me, you could try having the absolute wrong hair type for dry shampoo. Or you could just go for a white-gray dye and bleach job, which is all the rage on the hallowed halls of tumblr:

Centuries before capris burst onto the scene, declaring to all and sundry “I’m on vacation! But I still don’t feel awesome about my legs, really!”, the founders of our great nation knew that the best pants were actually half a pair of pants. Check out Ralph Earl. Nay, check out Ralph Earl’s stocking-clad calves. It’s enough to make you fan yourself with your mob cap.

If you were holed up in a hot Philadelphia meeting hall with your buds in the Continental Congress, you didn’t want 100% of a pair of pants bringing you down. Not to mention, long pants weren’t really a thing yet. No, you wanted to show off your flair and keep cool with these slim, flattering cropped pants, decorated with a little embellishment above the knee.

Samuel Adams models the looser version, appropriate for even the most mutton-fed body types:

So how do you replicate the look today? Capris, bermudas, or for the traditionalist, a slick pair of riding pants: 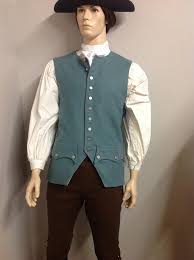 Go to your nearest hipster bar, used book shop, or bicycle store. Wait 5 minutes. You will see at least one young man in an undercut, facial hair, and a waistcoat.

I’m going to need you to steal his waistcoat.

You can tell him you’re doing it ironically.

Is it a frock? Is it a coat? It’s a mother-lovin’ FROCK COAT, is what it is. What, too warm to wear on July 4th? Well they didn’t have air conditioning at Independence Hall. And freedom isn’t free.

Anyway, just because you’re drafting articles of Confederation doesn’t mean you need to neglect your articles of clothing:

See that? Frock coats. Frock coats as far as the eye can see. And lucky you, you can still buy them:

4 thoughts on “This 4th Of July, Why Not Dress Like A Founding Father?”