It’s hard to believe, but 2015 was the 20-year anniversary of the release of Clueless. In those twenty years we’ve gone from being small children, to early 20-somethings who could play drinking games all the livelong day, to two adults on the bring of 30 who don’t have the energy for that anymore. But we still created a Clueless-based drinking and workout game to celebrate the occasion during our Clueless Week!

Clueless is the movie that taught us about drinking games – suck and blow, anyone? We may have been too young to really get what was going on when Clueless came out 20 years ago. But now anyone who can remember when Clueless was a new hit movie is, by default, over 21. That means we can play the drinking games now! As always, drink responsibly and legally, and feel free to substitute in a non-alcoholic beverage.

If your buns don’t feel nothin’ like steel, or you have some freeways to accidentally merge onto after this, do our workout version instead!

Pour A Little Out For Your Homie OR Sun Salute 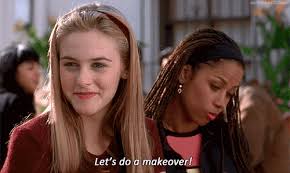