We know all good things must come to an end, and the reign of the Original Broadway Cast of Hamilton can’t be with the show forever. We’ve already said goodbye to Jonathan Groff as King George, and odds are Lin-Manuel is leaving in July, and maybe Leslie too? Despite the fact it will obviously be a sad end of an era with the OBC cast leaving, there are so many talented actors out there who would be perfect for the show. So if we had any say in casting, here are our choices to get in the room where it happens.

Tony-nominated Josh Henry has already worked with Lin in the past, as he was an ensemble member for In The Heights in both the off-Broadway and Broadway productions. In fact, he was in the early Vassar workshops of Hamilton, playing both King George and James Madison/Hercules Mulligan. So why not bring him back to play the lead role? After he ends his run in Shuffle Along, of course. He already did a great job as seen in the video above. HamilJosh? Sign me up.

I know, he’s busy right now. But think: he has amazing stage presence, he has that perfect tenor/baritone voice, he can play characters in that gray area between good and bad, and I’m sure he would absolutely crush Wait For It. Maybe we’ve never seen him rap, but we’ve seen him cover Tenacious D so we know he can go off-genre.

I’m not just saying this because we love him. Now that Taye is in his mid-40s (I DON’T KNOW HOW EITHER), I think he has exactly the gravitas needed to pull off a role like George Washington. Let’s talk about One Last Time. Can’t you just hear him singing that? Having an established Broadway veteran playing America’s first president just makes sense. I don’t know whether he can rap (see this) but I feel like he can probably do anything.

I tend to think of Hercules Mulligan as the most youthful of Hamilton’s crew (after Laurens, maybe) and I just know Bryshere Gray (Hakeem from Empire/ Yazz The Greatest) could pull off all of the bravado and energy the character has.

Does this young, strapping man look familiar to you? If you’re of a certain age, you recognize him from the DCOM Teen Beach Movie franchise, but if you’re like us, you’ll know him as Doody from the delightful Grease Live special earlier this year. We basically went through puberty again and swooned after seeing him sing Those Magic Changes, and now that he’s on his own solo career with a R&B/hip-hop vibe, he can fit right in to eventually replace HamHearthrob Anthony Ramos.

Ashley Park is currently in The King and I revival on Broadway, and since we just found out the show is closing at the end of the month, let’s give Ashley another job a mile and a half away to the Richard Rodgers, shall we (dance lolololol)? She has a gorge voice and poise on stage that would fit right in with Eliza’s graceful demeanor.

The fab Nikki M. James won a Tony Award for her role as Nabulungi in The Book of Mormon, but if you’ve ever seen the show, you know it’s got a much different vibe than Hamilton. But even in that role, Nabulungi and Angelica have one thing in common – they’re both strong willed women in a male-dominated world, and if Nikki can win a Tony for Nabulungi, she can most def step into bustle for Angelica.

Vanessa Hudgens as and Peggy/Maria Reynolds

Because we loved Grease Live more than we thought we were going to, here’s another musical alum – both of the high school and Broadway varieties. BBV played the good girl in HSM and the bad girl in Grease, a perfect mix needed to play andPeggy/Maria in Hamilton. And if you happen to be one of the people who don’t believe she has the vocal chops, just watch that video above.

Oh Norbert. How I love you so. And I want you to be in my life again, and not just on Bloodline. I would like you to specifically join the HamFam because you are talented and great and your voice makes me swoon. The end.

I mean, come on. Do I even have to explain this? No. Just enjoy NPH at the Tonys a couple years ago causing a ruckus with a bunch of celebs as Hedwig instead. One of the best-ever performances on the show.

5 thoughts on “What Comes Next? Fantasy Hamilton Replacement Cast” 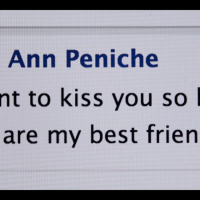