Here’s a bit of 90s nostalgia you never hear about: Christmas decorations. That’s because holiday decor of the 1990s, like holiday fashion and holiday television, was delightfully cheesy. In this, the Let’s All Decorate Christmas Special, let’s look back at the Yuletide decor of the 1990s. Then next week, you can revisit 90s Christmas decorations all over again when you visit your parents who are still displaying the ornaments of your youth.

Ceramic Tree With Half Of The Bulbs Missing

For a 20-year period, everyone had one aunt who took a ceramics class where she painted and glazed a Christmas tree. You probably lost most of the bulbs within a decade (especially if you had cats). The “classy” ones were frosted white.

Outdoor electric outlets certainly existed in the 90s – but more homes hadn’t added them yet, so you saw a lot more lights strung up inside the windows. We’ve come full circle: I don’t have an outlet at the front of my house, so I hang twinkling fairy lights inside my windows.

We are all Chandler Bing. At some point in the 1990s the tiny lights took over, but the big ones are sort of back in a retro way now.

Even at the turn of the millennium, our technology wasn’t really *all there* yet. It took us 5 minutes to sign on to the Internet and our cell phones were as big as kittens. These slow, jerky electronic Santas were pretty high-tech for the time. Also they looked like they were about to launch into a really awesome break dancing performance at any time. 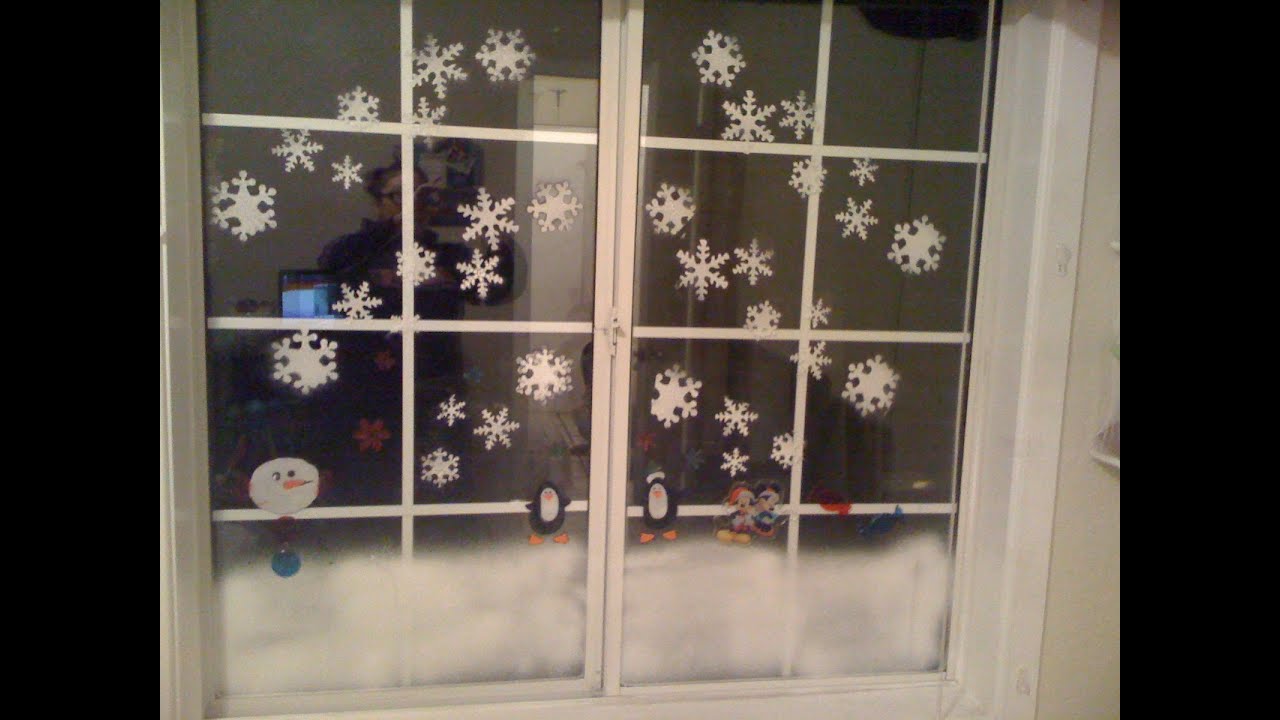 I was never allowed to have spray paint snow, in part because my mom didn’t want to clean it up and in part because I lived in a city that gets 100 inches of annual snowfall. Still, these aerosol cans of “snow” were all the rage. Some people stenciled elaborate snow scenes, but most just frosted the bottom quarter of their windows and called it a day.

Reignite THIS 90s trend, teenaged Tumblr hipsters! Precious Moments, deformed cartoon children who loved Jesus, were popular in middle class homes in the 90s. Somehow I ended up with a hand-me-down set, so just like suburbanites in 1991 I can reflect on these two weird-looking kids who have a baby. 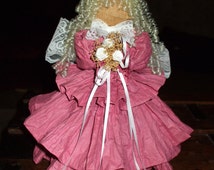 My requisite Grandma Who Was Into Crafting loved making angels …  which are now part of my Christmas decoration stash because somebody decided I should have them. There’s a crepe-y one in “country blue,” a doll-like one with a raffia head, a puffy squat plush one, and a gingham-dressed doll with straw hair. Country Angels were the Yuletide companion to those damned country geese. If your mom decorated in powder blue and “dusty rose” and hung quilts on the wall, she probably had a country angel or two to herald the birth of the Baby Jesus.

Those Big Plastic Santas and Snowmen

Before those blow-up decorations burst onto the scene, these big plastic Santas and Snowmen were the in thing. Of course, if you were really into the *reason for the season* you probably had this bad boy:

Ceramic Ornaments You Painted Yourself 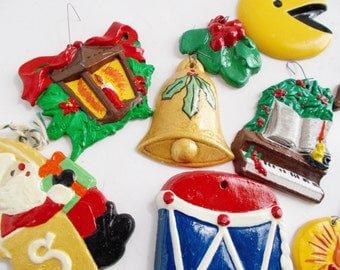 Every year as a child, I looked forward to a craft day spent meticulously painting these ceramic ornaments. And every year as an adult, I regret keeping so many terribly painted ornaments from my childhood (turns out kids aren’t actually meticulous).

A Village From Yesteryear There are still plenty of collectors of Christmas villages, they were just bigger in the 90s. These elaborate villages were complete with cottony snow and tiny carolers. I thought they were awesome, but also sort of a tease because it was a whole set of cool toys that you weren’t allowed to play with.

Christmas villages were usually set somewhere in the 19th century, but has it been long enough that we can have a 1990s Christmas village? Because THAT is something I’d collect. Another thing that technically still exists, but has been phased out by most decorators of our generation. Nowadays people choose stars, less-fluffy angels, conceptual tree-toppers, or nothing at all.

I never got the connection between Christmas and Hess Trucks, but some people not only bought them every year (normal) but also displayed them every Christmas (okay).

Collectibles From A Fast Food Place

Fast food glassware is a thing of the past, but in the 90s you could go to Burger King or McDonald’s and obtain a set of Christmas cups or plates. Happy Meal toys could even be called into decorating service: I don’t know why we liked trolls so much, but we did – and even adults incorporated them into their holiday decor. There were plush trolls that a child could cuddle on Christmas Eve, too.

Now, everybody knew that the special holiday beanies were more “valuable” so you had to treat these gingerly if you wanted to sell them for big money in 20 years (oops).

I had friends whose moms collected the annual holiday Barbie. It was usually wearing some kind of swanky gown and displayed with pride in a mirrored curio cabinet.

A Porcelain Doll Dressed Like She’s From The 1800s

They always looked like a cross between a ghost and a rich girl from a Charles Dickens novel.

A Stuffed Bear In Outerwear I just learned that K-Mart released Christmas bears every year, so I guess that’s where everyone was getting these from in the 90s.