Episode 3.14: The Heart is a Lonely Snipe Hunter

Netflix synopsis: Diane gets mad at the guys when they take Fraiser on a “snipe hunt”. But she also doesn’t want Fraiser to know they played a trick on him.

Guys. Things have happened. In our last Cheers Chats, Sam & Diane seemed like there were on the verge of breaking up, but it was unclear whether they actually did. By the end of season 2, they have a literal slap flight, and they break up for good. In the beginning of season 3, we find out the split has made recovering alcoholic Sam revert back to drinking and Diane has been gone for a while at some retreat in the wilderness, where she meets Dr. Fraiser Crane – her now-boyfriend (no idea they dated). Sam eventually stops drinking, convinces Diane to come back to Cheers and the three of them have to act cordially. Meanwhile, Coach fell in love with a random woman, proposed to her, she wins the lottery, she dumps him. All in one ep. Cliff, Carla and Norm are all still there.

So What Had Happened Was…

T: Norm, Sam, Cliff and a bunch of the regular barflies are heading out on a fishing trip and it seems as if they all hadn’t planned it more than 3 hours in advance. Frasier goes with them, specifically on a “snipe hunt” What’s a “snipe hunt”, you say?”

“It’s an age-old custom wherein we take an uninitiated hunter like Dr. Crane, put him in a clearing with a gunnysack* and we beat out the snipe to him.”

M: Gunnysacks = a brand of 70s dresses like in the Virgin Suicides at prom, is what I thought. T: Gunnysack sounds like the tiny leather tie-up satchel folks used to use to keep their sixpence. Anyways, The guys basically abandoned Frasier in the woods as a sort of hazing.

T: After Diane uses a lot of big words to scold the guys for leaving Fraiser in the woods, Sam (who obviously still cares for Diane) agrees to go find him after she pleads that he is not going to be happy about being left in the woods alone. By people he’s not even really friends with.

T: As soon as Sam agrees to go find him, Fraiser bursts through the door looking extremely disheveled and furious. But he’s just fake angry that they introduced him to that “positively intoxicating sport” and does some sort of psychotic bird call which doesn’t make sense because they went fishing, not bird watching. 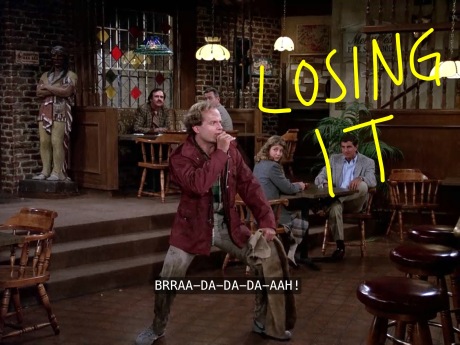 T: The guys are going back out fishing and Sam tells diane they plan to ditch him again wtf is wrong with men

M: I really can’t overstate how many times during this episode Traci and I both commented “men are the worst” or “WTF men.” It’s like the theme of the episode.

T: Carla is preggo again by some dude who willingly agreed not to be a part of the kid’s life but eager to pay whatever she wants to help raise the baby. This is Carla’s sixth kid.

“You have to be a certain kind of guy”

Carla: “Yeah a kind of dink”

(We just have a feeling we’re going to be saying Shut Up, Diane at our screens KIND OF A LOT.)

Compared to the dumbass guys in this episode, Diane seems like a freaking angel.

At one point, Diane tells Sam that Frasier refers to him as one of his dearest friends, which is still a weird dynamic because of the Diane of it all.

M: Has Frasier been outdoors before? Literally would not surprise me if he hadn’t.

Actually, I could really see Frasier as one of those fancy fox hunters who has special dogs and horses.

Some Frasier shit right there.

None. This was not a quality ep.

Frasier: “This time of the year is murder for the psychiatric profession.” … Why tho?

Carla: How come you’re not going?
Coach: I don’t like to smell them.
Carla: Yeah, fish stink.
Coach: No, the guys.

Frasier: “It’s what guys do darling. We screw each other to the wall.” Frasier tells Diane he fully knows it was all a prank, continues to prove men are the worst.

T: In the cold open, a guy starts singing song (songs?) i’ve never heard of in my life and it starts a chain reaction with Carla, Diane and other barflies pick up – someone leaves and the person comes in starts singing and ends with coach – but it’s really a sign of the times that I know none of these tunes. Except *I’ve got spurs that jingle jangle*.  Seriously what is this.

M: TRACI IT WAS SUNNY SIDE OF THE STREET JESUS. Jazz standard, lady. (It’s not really an “everyone sing it at the bar song,” Traci’s right. Also I don’t know the spurs that jingle jangle tune, so really both of us need to get the heck with it.)

T: Coach comes in smoking a cigar that smells like “boiling tar” according to Sam. Why in the world is Coach just starting to smoke a cigar now. WHILE he’s working? For the record, cigars are one of my most hated smells in the world.

M: Agreed. I smoked a cigar with friends once or twice – WHY?! Because I used to be impressionable – and it was like… imagine grabbing a cigar, taking a big bite, and chewing it. Then turn that chewed cigar glob into vapor somehow and put it in your lungs.

T: The guys are bringing a TV with them for their *day-long* fishing trip, and Norm even brings his portable VCR player with “Porky’s II and Splash”. ok.

T: ALSO if it’s a day-long fishing trip, they’re gathering at the bar in the morning, I’m assuming – why are there so many people at Cheers during the waking hours??

M: And like, do they fish a lot? Because they have those dedicated khaki vests with the big pockets, which I feel like you only would own if you were really into fishing. But that doesn’t feel like a Boston barfly activity?

T: I did NOT enjoy this ep.

M: If I had only seen this ep, I would hate Cheers. Not so confident in AV Club’s episode list, to be honest.

Next Up: We are basing our watch list off of AV Club’s 10 Episodes That Show How Cheers Stayed Great For 11 Seasons. We’re going chronologically, so stop by next month when we’ll discuss season five, episode 9, Thanksgiving Orphans.

4 thoughts on “Cheers Chats #6: The Heart is a Lonely Snipe Hunter”