Welcome back to Cheers Chats! We’re more than halfway through the series at season 7 of 11, and at the moment, we couldn’t be happier! Luckily, this episode wasn’t as frustrating as some of the other recent ones, so read on to see what made this one so special.

Episode 7.7: How To Win Friends And Electrocute People

(Brief synopsis of what happened prior to this episode)

The CEO of the company that bought Cheers, Evan Drake aka Rebecca’s boss aka the man she is obsessed with, moves to Japan, leaving Rebecca with a new boss. This dude fires her and rehires Sam as the manager so he’s back in charge. Sam agrees to let Rebecca work there under a bunch of different conditions, but she’s basically back co-managing with Sam.

Meanwhile, Norm’s picking up random jobs by painting, including for Lilith and Frasier, Carla gets jealous her husband is hanging with a beautiful East German ice skater, and Woody buys a bee hive.

M: You have Traci to thank for that synopsis, because I have fallen out of love with this show (and time to watch it) and have only been able to bring myself to watch our assigned episodes. I think I can call this project a failure.

This is the first time I have ever failed a project.

Cliff decides to change his personality when nobody visits him in the hospital. Lilith asks Sam to help her learn how to drive.

What Had Happened Was

Cliff has appendicitis and natch gets dramatic about it and even plans his funeral/memorial. But when no one goes to visit him, he realizes it’s because he’s “insensitive” to other people’s problems. To solve this, Cliff decides to hire a doctor to give him shock aversion treatment (he presses a button and Cliff gets shocked) anytime he’s insensitive to the folks at Cheers. This isn’t going to go well.

Meanwhile, Lilith and Frasier are going on a cross-country road trip, but she doesn’t know how to drive, so she asks Sam to teach her. Apparently she’s a bit of a crazy driver and Sam is frazzled by their lesson.

Carla continues to be a savage, especially to Cliff: “Come on, it’s just an appendectomy. They’re taking out a useless organ. He’s chock-full of those.”

Becky with the Good Hair

This hair accessory tho:

Carla’s bangs – as everything else in this show – have very much entered the late ’80s.

The moments that made us literally laugh out loud

In this episode, Lilith wears a big tweed suit and a chignon like it’s fox hunting day at Downton Abbey. 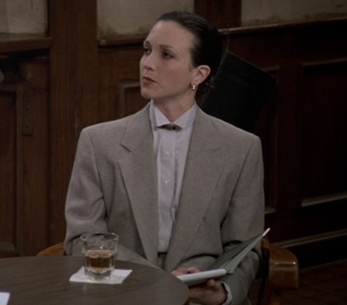 Sometimes I think they didn’t know what to do after Diane left so they split her into Lilith and Rebecca.

“I need someone to whom I have no emotional attachment whatsoever. So as a friend, would you do me this favor?” Lilith asking Sam to teach her how to drive.

Barfly: Come on, maybe it’s because he stole his whole character from Uncle Fester.

Frasier: Oh, Lord, is this still going on?! This has got to be one of the stupidest arguments I’ve ever heard since I started coming to this bar.

Barfly: Hey, we resent that.

Norm: Yeah, why wasn’t it THE stupidest?

“Hello, blossom bottom, how was your lesson?” I don’t want to know how Frasier came up with that name for Lilith

“I like driving. It’s a wonderful feeling. Total control of woman over machine. The speed, the power, the ecstasy– I was jazzed.” Lilith, who has never truly been ‘jazzed’ in her life.

Cold open: Woody calling a late night phone sex line commercial – why this show has gotten increasingly raunchy over the past season?

[Also people had to call phone sex lines in the 80s. Well not HAD to, had to. You know what I mean.]

Fraisier gets a Trip Tik from AAA – remember doing that? Actually I do I did that for my 2009 cross-country road trip. But remember a life without GPS and iPhones?

Did they faux-paint the walls of the bar sometime lately? They’re distressed. As am I.

“I forgot I married a madcap” Fraisier about Lillith. I think I missed the ep where they got married? Or maybe they just didn’t show it?

“They found the time to visit Sammy when he was in the hospital. And Carla when she had the twin. Normie, when he went in for the butt tuck I know why they didn’t visit.” Cliff … Norm had a “butt tuck”???

I don’t think we’ve ever seen the space just outside the door of Cheers where the stairs end before. A couple episodes, Carla had sex with her husband there.

Rebecca’s red power suit is for the ages

Carla’s jungle shirt isn’t even the craziest thing she’s worn over the past couple of seasons. She’s been turned into this quirky lady who wears unusual shirts and earring and no one says a damn thing about it.

I’m almost certain we’ve talked about a jungle-print outfit on her before.

Lilith in her aviators and riding gloves is the hottest she’s ever been.

Rebecca looks like an FLDS member in this green dress

Cliff is in his mailman’s uniform for every episode, so it’s rare we get to even include him in our fashion section. Here he is acting a fool, but still wearing the same color scheme as his work uniform.

Finally, Sam continues to sport his signature look of striped shirts with pockets large enough to smuggle a handful of decorative autumn gourds.

This was a great spotlight on John Ratzenberger’s comedic physical abilities, and one of his best so far. Overall this is just a very silly episode. And I think I’m OK with that. – T

It was pretty cute! Cute isn’t my highest bar for television but sometimes it’s all right. I always like when they give a major plot to someone outside the Sam/Rebecca/Diane trio.

Next Up: We are basing our watch list off of AV Club’s 10 Episodes That Show How Cheers Stayed Great For 11 Seasons. We’re going chronologically, so stop by next month when we’ll discuss season eight, episode 19, Indoor Fun With Sammy and Robby.