To me, SNICK had always been a hotbed of coolness, the block of programming that was a necessity for kids to watch in order to be considered at the very least normal with their peers, but also a place where ‘cool’ characters were always present. As a kid, I always looked up to the kids on Nickelodeon as either wanting to covet their lives or utterly fascinated by how their everyday lives seemed to be.

As a little Asian girl growing up in Western New York, this was particularly true of Shelby Woo. At the time, I don’t remember seeing anyone that looked remotely similar to me or had a similar background. Now, I didn’t live with my former Karate sansei innkeeper grandfather or was Chinese or even an amateur sleuth for that matter (as much as I tried, Ghostwriter didn’t write back), all I knew was that I could relate to someone on television that was also a descendant of an immigrant and – not white. #RepresentationIsImportant

Shelby Woo was a go-getter, someone who wasn’t afraid to find the truth about the cases police had trouble solving. She was smart and cunning, among many other things, but all these character traits were enviable by 12-year-old Traci. Shelby was a possibility – a possibility for a young girl to become a detective when she got older, because we still were asked, ‘What do you want to be when you grow up?’ without it being totally depressing. I didn’t grow up to be a detective or anything close to it, but Shelby Woo represented what could be. Even when she was figuring out less-than-enviable cases about stolen lunch meat from the cafeteria.

A sudden bout of food poisoning hits the cafeteria at Space Coast High, and Shelby searches her school for suspects. Could it be the work of a rival meat supplier? A nasty cafeteria employee? Or someone trying to send a message to the school administration? And if Shelby can’t find out how someone made the kids sick, is there a chance it could happen again? 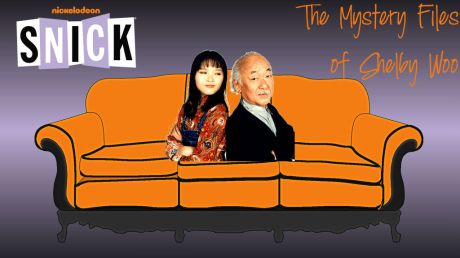 So apparently this episode never aired. Not sure whether it’s because the show was cancelled or Nick execs just didn’t think the quality of this particular episode was up to par, but it has had to resort to a life on YouTube, never seeing the light of cable day. I’d also like to note that I don’t think I’ve seen this show in like, 17 years, so I don’t really remember all the details of it. What I can tell you is that Shelby Woo was obviously a precursor to our beloved Veronica Mars. Like, eerily so.

0:31 Bless grandpa Pat Morita. Is he still alive?? And why does Shelby have a thicker accent than gramps? (PS: Pat Morita died in 2005. Oops. #RIPPatMorita)

1:10 I don’t remember Shelby breaking the fourth wall in this show?? 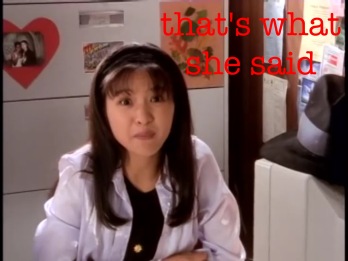 As previously mentioned, a bunch of kids are sick, and Shelby’s managed to trace it back to the hot dogs served in the high school cafeteria. One dude ate 11. There was a wager going on. Kids are dumb.

3:25 Tim’s mom (also the school’s librarian) is a vegetarian and mad at her son for eating meat. She then sees another kid in the nurse’s office with a leather bookbag and scolds him, suggesting he use a macrame bag instead. A) She’s probs the head of PETA rn. B) I think Tim tainted the hot dogs.

Also Shelby’s friend Noah is wearing one of those shirts 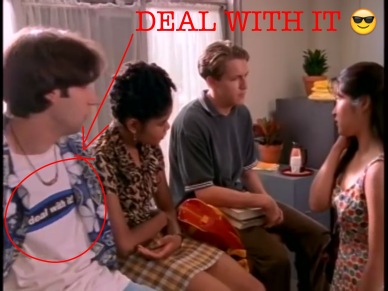 4:30 Shelby’s boss (?) at the police department was called in to solve this hot dog mystery. Why is an actual detective at some high school trying to find the culprit instead of figuring out a murder or something in the town?

6:00 The meat provider for the cafeteria is a Southern dude who works for Cummings Meat. He legitimately just used the phrase “Cummings weiners”

By the by, Shelby is using her computer skills to solve the case, because apparently there’s a special program on her Apple computer that organizes all her case information. 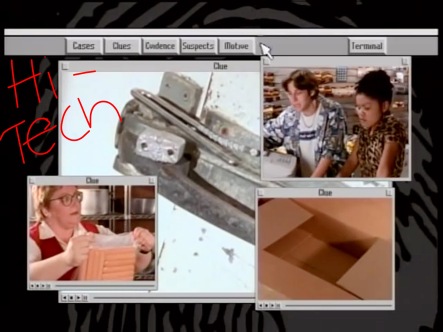 12:30 Now Shelby and her co-sleuths think the Cummings Meat guy could be the culprit and follow him at his morning delivery. They also look like they’re two years out of college and have nothing better to do than hang out at their old high school. 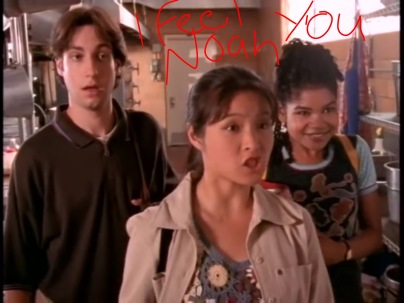 “I had to rotate 40 pounds of meat” Cummings Meat Guy

“While we’re here let’s look around of clues.” Shelby

HELLO DID YOU NOT LISTEN TO WHAT WEINER GUY SAID? The perishables should be moved to the top not kept being pushed down. German lunch lady probs wasn’t paying attention to expiration dates and grabbed a pack of hot dogs she thought were fine and served them to the kids. Which would explain why none of the packages had been tampered with.

13:43 Shelbs and Co. are stuck in the freezer and it’s like I Love Lucy all over again. This is when cell phones come in handy.

“Oh man I hate exercise maybe we could… snuggle?” Noah is my favorite, despite his creepiness.

15:00 I feel like this episode is a giant PSA for PETA and anti-eating meat.

16:00 Okay now the nurse is starting to be sketchy. First Shelbs accidentally knocks over the nurse’s purse and crap falls out, including a big ass bottle of aspirin, latex gloves and a needle, despite the fact she said earlier she can’t use needles (as per the law?). She also initially said she was “glad” to see all the kids in her office in the beginning of the episode, so maybe she’s the one who did a switcheroo in the freezer to get more kids sick? Because she’s an insane masochist? Or she wants to prove she’s invaluable?

16:25 TIM THINKS HIS MOM POISONED THE HOT DOGS. There’s still like 10 minutes left, so it’s not her.

17:34 Gramps shows up to school because Shelbs forgot her lunch. And the “detective” hat he’s been trying to push on her since the beginning of the ep. Again, taking a page out of Full House’s book, are we?

18:00 Gramps reveals the PTA is considering slashing the budget – including cutting the school nurse.

21:00 Shelbs has a solid theory for the case and calls her Detective boss back in to do some questioning, but really, neither of them are legit. Shelbs fingers the nurse and says she used the needle to poison the hot dogs without opening the packaging, and she did it to prove she needed to keep her job. I was half right.

22:00 Tim feels bad about putting the blame on his mom, but ultimately realizes it’s fine because she’s just a super vegetarian who just wants to push her ideals on her son and his teenage friends.

They fired the nurse! I feel like IRL there would’ve been a lawsuit against her, but there’s only 22 minutes in Woo World. 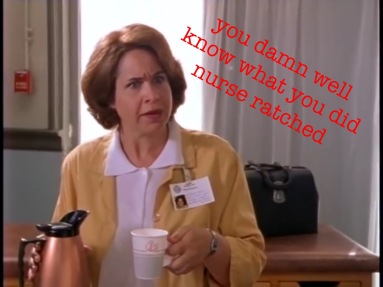 The executive story editor for this show is Suzanne Collins – and if that name rings a bell, it’s because she wrote The Hunger Games triology. She also wrote most of the novelizations for Shelby Woo, which explains why Katniss and Shelbs are basically the same. jk. ALSO, the director was Allison Liddi (-Brown), a person whose name I creepily recognized because she has directed eps of such shows as Parenthood, Scandal, Grey’s Anatomy, Private Practice AND The Secret World of Alex Mack, among others. Her resume reads as my life story. 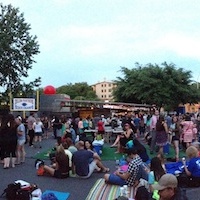