When the first Comic-Con launched in San Diego in 1970, it was only attended by about 100 fans. It was originally founded to showcase comic books and science fiction/fantasy films and TV shows. The featured guests included a science-fiction book collector and a comic book artist. Since then, Comic-Con has turned into a pop culture mecca across almost all genres, including horror, animation, video games and more. 150,000 people are expected to show-up (would be my personal hell) this year. Is it because there are more comic book fans than ever or because Comic-Con has become the ‘it’ place to be?

my friend was forced to go to comic-con by her bf a few years ago and she said it was hot, sweaty, it smelled and way too many people in a close proximity. she goes every year – to enjoy san diego while everyone else is at the convention.

There was a time when Comic-Con was thought of to be the place where geeks gather – which, let’s be honest is still true to an extent – but over the years, geek culture has become cool, and all zeitgeisty. I mean the fact that the most popular films over the past decade or so have been superhero films says it all. The kids who were once made fun of for reading comic books aren’t nerds – they’re the ones who know most about current pop culture.

And this particularly reflects at Comic-Con, where it’s become the ‘go-to’ place for celebrities over the past few years. If you want buzz for your TV show or movie, you better go to Comic-Con. All of the major studios get a couple hours to show off their upcoming movies and last year, director Zack Snyder made an unannounced appearance at the Warner Bros. panel to reveal that his Man of Steel sequel would feature Batman. Obviously, since then so much hype has been made about who they would cast as Batman, and even more of a fuss was made when they announced Ben Affleck would become Batfleck.

On the TV side, the cast of Veronica Mars went down to San Diego for a panel in Hall H, the biggest venue with over 6,000 seats. It was the first time the cast and creator Rob Thomas came together in front of the public since they smashed the Kickstarter records, and they debuted the first (mini) trailer for the film. Thanks to technology and social media, people live-blogged, live-tweeted, live-Facebooked etc. the event and the conversation about Veronica Mars reached beyond the 6,000+ people in Hall H – it went all around the world. This is the kind of publicity and buzz entertainment bosses and marketers hope for when they send their casts to Comic-Con, and it’s exactly why the convention has gone beyond traditional comic books (although those folks are definitely prominent throughout the weekend as well).

Whether you’re heading to Comic-Con among the throngs of people or following the action in the privacy of your own home, here are a few panels/events to keep an eye on as the buzz gets buzzier.

Jeff Bridges, Brenton Thwaites, and Odeya Rush, director Phillip Noyce, and author Lois Lowry are scheduled to attend, but this is Meryl Streep’s perfect opportunity to show up to Comic-Con and blow everyone’s minds. Also, this will give the cast and director a good chance to defend themselves against everyone that hates the trailer.

#SixSeasonsAndAMovie!!! It’s coming back y’all. Just when you thought they were out, they come back like Starburns from the dead. Speaking of which, he’ll be there, along with Joel McHale, Gillian Jacobs, Jim Rash and executive producers Dan Harmon and Chris McKenna. While I’m glad it’s rightfully receiving its sixth season, it’ll be interesting to hear where they’ll take the storyline and if the show being on Yahoo will effect it at all.

Sharknado 2: The Second One

Just in time for the sequel which premieres on July 30th, the cast, including Ian Ziering, Tara Reid, Vivica A. Fox and Judah Friedlander will be on hand to talk about ANOTHER tornado made of sharks. (P.S. we’re liveblogging it, so be prepared)

Yes, that Goosebumps. Jack Black stars as R.L. Stine, whose crazy scary creatures are brought to life by his teenage neighbor, played by Scandal first kid Dylan Minnette. Chances are they’ll release some kind of clip or something but will the posters ever be as good as the covers?

Finally, a movie of Adam Sandler’s that doesn’t sound stupid or sexist! In this movie, aliens mistake satellite feeds of classic arcade video games like Space Invaders and Centipede as a declaration of war and attack Earth using the same eight-bit characters and strategies. The U.S. President (Kevin James) hires a group of former arcade prodigies including Adam SAndler, Peter Dinklage and Josh Gad to combat the aliens. Color me intrigued.

Mike Tyson has a cartoon. He stars in a cartoon where he solves mysteries. His co-star is Jim Rash from Community. I don’t even really like animated series but the fact that Mike Tyson is a *voice over actor* is hilarious.

An hour in which the cast, executive producers Graeme Manson and John Fawcett and the fans in attendance praise Tatiana Maslany and let out their frustrations over the fact she was snubbed yet again this year at the Emmys.

Daniel Radcliffe wears horns in this movie. He was supposed to come for HP & The Deathly Hallows, but couldn’t because of scheduling, so hopefully this year will mark his long-awaited debut at the Con. It’s like the mothership is calling him home. The movie’s about DanRad’s character who grows devil horns after his town is convinced he murdered his girlfriend. You know, the usual overdone storyline.

Fight Club: From Page to Screen and Beyond

Author Chuck Palahniuk recently announced that he’s finally writing that sequel to the first book, a mere 18 years after it was released. That sequel is appropriately coming in the form of a 10-issue comic book series, and he will no doubt talk about it at the panel. The movie’s director, David Fincher will be on hand and I’m guessing the chance of Brat Pitt or Edward Norton showing up is slim to none.

Warner Bros. has three major films on the docket, including Jupiter Ascending (Channing Tatum being all heroic with Mila Kunis), Mad Max: Fury Road (Charlize Theron looking like a badass) and The Hobbit: The Battle of the Five Armies (honestly had no idea there were still more Hobbit movies in the making). Of course there might be a surprise or two – perhaps Zack Snyder will show up like last year, but this time with the cast of Batman v Superman: Dawn of Justice? Batfleck, everyone. Just want to keep saying Batfleck.

I’m going to be honest with you guys – I haven’t seen The Avengers. Add that to my list of pop culture blind spots. Of course it’s like one of the best-selling films of all time, but I’m immune to it, apparently. The follow-up, Avengers: Age of Ultron doesn’t come out until next May, but there’s sure to be something teased at Comic-Con. Of course Marvel will make its last-minute push for Guardians of the Galaxy, which opens next weekend (not like they’ll need it). I’m just looking forward to more Chris Pratt interviews, and maybe more french braiding. 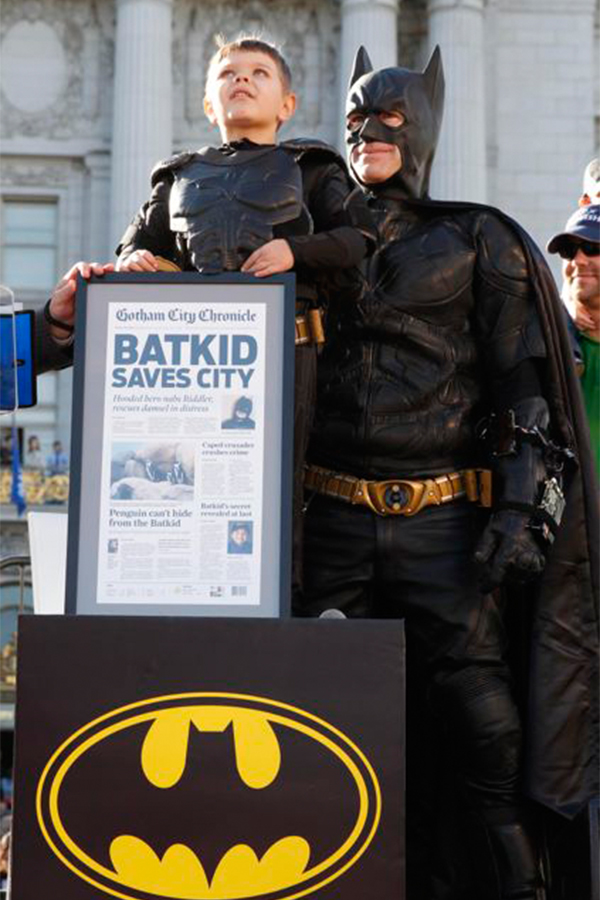 Get your tissues out again. The San Francisco kid who stole our hearts is back at the centre of a project of an Indiegogo campaign, and the filmmakers behind the documentary will be on hand to talk about the movie (and probs ask for money).

Random notes: Paramount Pictures and 20th Century Fox will also give presentations, and panels from the Sin City sequel and Outlander TV series will be held. There might be unexpected previews for Christopher Nolan’s Interstellar and the new Jurassic Park too. Also, super geeks will rejoice in seeing Benedict Cumberbatch at his first ever Comic-Con. Keep your clothes on, ladies. And men.

9 thoughts on “Comic-Con: Not Just For Nerds Anymore”