Celebrities had to start off somewhere before they became mega-famous, right? And for a lot of stars, they may have been in big movies a long time ago, but we had no idea they were in them. And it totally fucks with everything you thought you knew. Here are a few actors who were in that one thing that you never knew they were in.

You know him, you love him, but did you ever put together that he was the hot guy Amanda Bynes was bro-ing with/mackin on in She’s the Man? Wonder if those two still keep in touch… 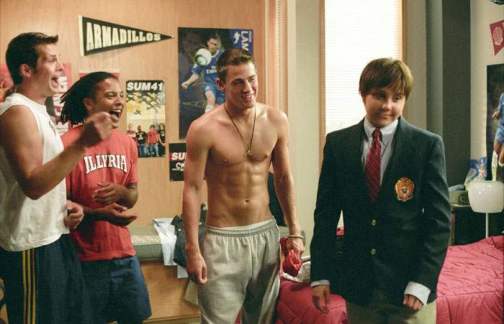 You know him as the honorable Lord Grantham from Downton Abbey, but when I saw he was in the Masterpiece Classic, I literally thought: ‘Oh my GOD that’s Bernie from Notting Hill.’ He play’s Hugh’s buddy Bernie in the film, and if you recall, he was the friend during the dinner when they first all met Anna (Julia Roberts) and he had no idea she was a huge movie star.

This Brit plays Rick Grimes on The Walking Dead, a show I don’t even watch and honestly have no interest in watching. But Again, to me he’s an actor from another Brit-featured rom com – Love Actually! This shot tells it all.

Speaking of Notting Hill, long before she went on a downward spiral both as Marissa Cooper and IRL, Mischa was a kid actor, including her scary stints in The Sixth Sense and the girl who worked with ‘Leonardo’ multiple times in Notting Hill

All around hottie with a body (ew, hate that I just typed that), Alexander comes from a family of actors, so naturally he started out young. In fact, he’s barely recognizable as a young lad in Zoolander. can you believe he was the dude who screamed ORANGE MOCHA FRAPPACINOS?!? I used to yell that shit all the time. God, I was obnoxious.

Does anyone else find Stan really obnoxious but endearing at the same time? Well in the 80s, apparently he was endearing enough to have a pull out poster in Bop magazine. The dude was a teen heartthrob! What?! Jay was in Evening Shade and The Outsiders TV movie based on the Rob Lowe film.

Despite the fact that he was an adulterer on Homeland, I actually kind of liked ‘Uncle Mike’. The episode he had with the brooding Dana and actually acted like more of a Dad than Brody proved that there was more to him than a soldier or a betraying best friend. I miss Homeland. Anyways, did you know that he also hooked up with Rachel McAdams in Mean Girls? Check out Regina George and Shane Oman – special appearance by Amy Poehler!

Okay, not over Homeland yet. Good old Saul. Of course Mandy Patinkin is an accomplished actor, both in film, tv, and on stage, but if you only associate him as Saul, it may be weird to think that he was also this guy in The Princess Bride