Well folks, it was no April Fools’ Day joke – maybe it was kind of a little? – but on Friday, SyFy premiered Dead 7, a zombie Western featuring 90s boy band members and teen idols and made by the fine folks who blessed the world with all the Sharknadoes.

When I first heard about this movie, I was NOT aware it was supposed to be in the same vein as Sharknado, so finding out my beloved Backstreet Boys members – Nick Carter, AJ McLean and Howie Dorough – were going to be in it, I immediately #SMH in shame. Especially because this is the movie’s description:

A post-apocalyptic Western that follows a group of gunslingers as they look to rid a small town of a zombie plague.

Um. Nope. But if you go into it knowing it’s a parody of sorts, I think you’ll enjoy it more. Or at least not shake your head in as much shame. Or if you really want to forego the entire viewing experience all together, just watch this trailer and keep reading.

lol the opening credits are already ridiculous and I already know I’m going to hate this “plot” because I don’t care for zombies OR Westerns. But this is what I’m told: “Will they become cattle for the army of the dead or become warriors and fight against the growing darkness?”

This is the villain of the movie, Apocolypta, who is leading the “cattle”. She was also on MadTV and that’s the only thing I know her from, so will I be able to see past that? She does have an extremely annoying growling voice that isn’t anything like her Whitney Houston on the show.

Apocolypta is speaking some sort of foreign language, but why? Where is this taking place?

One of the reasons why I hate zombie movies/shows is because I do not like watching blood and guts and anything of that nature. We’re four minutes in and Apocolypta serves some prisoner a human heart to eat. This is going to be rough.

Story by Nick Carter. My boo 4 LIFE AJ McLean on a horse. A REMINDER OF WHY I’M WATCHING THIS MOVIE.

Chapter 1 (there’s more than one chapter??) takes places in Harper’s Junction, and we meet the first of the Dead 7, Billy aka Jeff Timmons of 98 Degrees, who shows up looking like a real dirty All-American hero. He has aged well, considering some of his counterparts. Hey, remember the time Jeff was in the Chippendales? Let me tell you – I just went to Vegas to see the Chippendales for my friend’s bachelorette and no one was quite as famous as Jeff Timmons.

Why is AJ straight up running into Harper’s Junction and shooting people left and right? He’s like the Joker on acid (I answered my own question – he’s working for Apocolypta and killing folks for the zombies to heat. Can you tell I don’t watch The Walking Dead?)

Turns out Jeff Timmons is one of the heroes (duh, Traci), and he kills zombies with his guns, in a way that is very reminiscent of the “special effects” seen when Ian Ziering battles sharks in Sharknado. As in, it’s horrible but horrible enough to let you know they’re not serious about this.

Number 2 of 7 is Daisy Jane, a large-breasted blonde played by Carrie Keegan. Don’t know who that is? That’s fine, I only know her because she used to host a live morning show on VH1 I had to cover for work called Big Morning Buzz, which she left in order to focus on acting. Ironically, she was replaced by none other than 98 Degrees’ own Nick Lachey.

“She took my eye but she took your balls.”

One of the first scenes Chris Kirkpatrick of ‘N Sync fame has is when Apocolypta gouges his eye with her thumb. He has an eye patch. And is the mayor of Desert Springs Jon Secada of Jon Secada has sideburns. GOD BLESS.

AJ is an insane villain and no shade, he is so good at being crazy. He’s always been the crazy one of the group so it’s in his wheelhouse, and his performance is getting me through this movie. And it’s only been 13 minutes. Also, we’re on “Chapter II: The Magnificent Dead 7” … how many chapters are there?

Question: Should I know these people?

Because there are so many rando 90s stars in the movie, I honestly can’t tell if some of these folks are celebrities or people from central casting.

We meet 3 of 7, Whiskey Joe as played by the second best actor in this movie, Joey Fatone of ‘N Sync. He’s beating people up and drinking from his whiskey bottle it is fantastic. Right after this fight, he says, “I gotta go” and he doesn’t mean leave the premises, he’s gotta go number one because WHISKEY.

Howard Dwaine Dorough of the Backstreet Boys is 4 of 7, a dude named Vaquero. Aka a Latino man with Ray Bans from the actual 1990s. And his accent is… maybe slightly offensive. Maybe also offensive is 5 of 7 Komodo – Erik Estrada of O-Town. Despite also being Latino, he is not type cast but rather playing a sword-wielding ninja cowboy. So Vaquero is way more offensive, I’ve decided.

In what I think is the first meta joke of the movie, Gerardo Mejía (the Rico Suave guy) is a store owner? (Who accepts teeth as payment?) Anyways, he says, “Suave! Woo! That’s my boy!” while he’s reading a magazine of sorts. What type of magazine could he possibly be looking at in this zombie world?

Question: What is Nick Carter hiding?

6 of 7 is the one and only Nick Carter of BSB, who plays Jack, Billy/Jeff Timmons’ brother. He’s camped out in a field by himself and gets a letter from Daisy Jane (who is engaged to Billy), and in the note, she encourages him to “put the past behind them”. Did Jack and Billy have a falling out? Did Jack and Daisy Jane have a romantic past? These are the things I’m willing to explore.

Honestly. He keeps mispronouncing Vaquero as Vacaro (like Brenda Vaccaro, which is a totally relevant reference) and it’s v entertaining to me. He also says, “There’s a bunch of chopped up copperheads (zombies) and they’re… muy muerto.” Spin-off with Joey and AJ. Except no zombies. Or as a Western. So, like a normal movie.

Question: What happened to Everclear?

This is Art Alexakis. He was in Everclear. Now he’s in this movie.

Concern: A kid is going to die

“I’ve gotta check on my foster kid, Georgie.” Jon Secada is the maybe only sheriff/cop in town, and earlier, AJ/Vermillion/Apocolypta’s right hand man, was talking to some kid after breaking out of jail. I am concerned for his safety now. Also, his foster kid?? Update: Foster kid is a zombie. So is Jon Secada. Great.

Question: What does Ikaika Kahoano think of all this?

Sure, Ashley Parker Angel wants nothing to do with O-Town anymore, but Making the Band fans know Dan Miller actually replaced the originally chosen singer Ikaika, who left because he felt like O-Town wasn’t a good fit for him. Then he went and started his own boy band who had a semi-hit with Hey Juliet and disappeared into the Hawaiian night. Does he wish he could’ve been a bartender then have his flesh chewed out by zombies like Dan? Probs not.

Komodo meets Trixie at a bar and she hasn’t left his side since. He’s trying to kill zombies and she’s just there. That is annoying enough, but this girl is like every hot girl in horror movies who looks great running away from a murderer, but the acting skills are just not there. And you know what I found out? The actress, Chloe Lattanzi, is the daughter of Olivia Newton-John. Yes, Sandy herself. Do with that information what you will.

7 of 7 is Sirene, a machete wielding amazong played by Lauren Kitt Carter, wife of Nick Carter. Nick Carter – star, executive producer, writer of the story. So she’s not the greatest actress, but bless.

Question: What happened to Shifty Shellshock?

My, my a Starry Eyed Surprise – to see Shifty Shellshock in a movie with members of ‘N Sync and BSB.

Whiskey Joe yells to Vacquero, “We’re in America we speak American!” Which, I get is a joke, but felt weird to me. To make matters worse, Howie’s Spanish is 6th grade Spanish and an accent that’s fit for Speedy Gonzales.

Comment: I forgot about the other half of O-Town

I failed to mention Jacob Underwood and Trevor Penick are also in this film, and while Jacob spends most of his short time on screen driving a pick-up truck, I honestly don’t even remember seeing Trevor at all. And he’s my fave O-Towner.

I stopped paying attention because I got distracted by stalking Scott Patterson on Twitter.

ARE YOU KIDDING ME Whiskey Joe plays a few notes of Amazing Grace on his harmonica before killing Howie and letting him out of his misery after a zombie prostitute bit him. Like what even was that sentence I just typed.

He is literally knifing Daisy Jane and Billy is crying because his girl is dead and AJ mocks his tears and it is equally hilarious and hot. 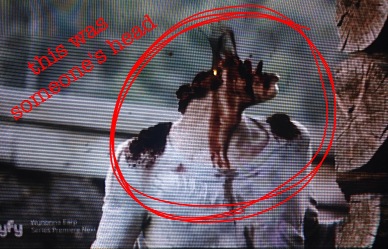 Question: What happened with Billy and Jack?

Billy’s dying and Jack is by his side and crying over his death, but I still don’t get why they had a tense relationship? These characters need to be *fleshed* out better, said no one except me about a SyFy channel movie.

LOL AJ’S HEAD IS LITERALLY ROLLING AFTER KOMODO USES TWO SWORDS TO SLICE IT OFF. 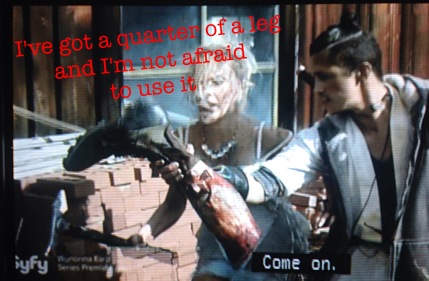 Question: When zombies die, don’t they come back to life?

Comment: I am mourning the loss of Whiskey Joe 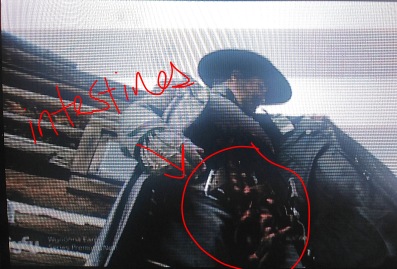 Whiskey Joey hints earlier that if he ever gets bit by a zombie, he has a separate “blood flask” that’s connected to a bomb lining his coat so when he turns into a zombie he’ll know to detonate it and kill himself. This happens for real and his intestines hang out. I cannot.

“They’re everywhere and I’m running out of whiskey.” Whiskey Joe keeping it real

Trixie get bit by a zombie, and in mourning, Komodo cradles her in his arms, then kisses her one last time – except she bites him. Like, come on. So he has to kill her they only way he knows how, by jabbing a knife into her skull. Then he kills himself in a Romeo + Juliet situation, thus becoming our tragic lovers.

Question: I still don’t get this movie?

Honestly where is this going, what’s the moral of the story here?

Jack/Nick gets bitten by a baby zombie that legit looks like Brian Littrell’s son Baylee when he was a tot, and I can’t unsee it. Luckily, Sirene saves the day.

Comment: The song makes so much more sense now

The original song made by the stars (mainly Nick and AJ) called In The End, is played in the beginning and, surprise surprise at the end of the movie, and it totally resonates so much more because of the journey I just went on.

I forgot to mention that. Pretty much everyone dies except Sirene. Which apparently is a relief to some, including Jack, who tells us in the voiceover that he ” has a chance to rest finally rest in death.”