Welcome back to the second installment of my viewing of Dawson’s Creek for the very first time (in its entirety, as an adult). I covered season one last month, and here we are with season two. We left off with Dawson and Joey kissing for the very first time, but did their hormone-induced lip locking carry over to full out romance in season two? Let’s find out…

I failed to mention in the first post that Dawson Creek’s iconic theme song, I Don’t Wanna Wait, by the Queen of 90s indie rock/Lilith Fair Paula Cole is NOT used on the DVDs/Netflix streaming. It’s an even more ridiculous song called Hearts and Arrows by another 90s indie-ish singer (who was not as popular) as seen below.

Yeah, listen to those lyrics again, they make no sense. I just don’t understand why Paula Cole didn’t want to get royalties from this!! She’s probs too busy raging against the machine or something.

So we return and it picks up moments after they kiss for the first time.

Attention Dawson & Joey: What is wrong with you people? I’m so glad I didn’t watch this as a tween because I would have expected this to be what my teenage years was going to be. Guess what? It wasn’t. Why are kids so moody and indecisive? Make up your minds already. Don’t be idiots. We can’t date – We have to date – Should we pretend we didn’t kiss? – Do you want that? – I can’t pretend we didn’t kiss – ::They makeout::

Notable Quote: “Everyone comes from a dysfunctional family – it’s the ’90s. the only happy families are in TV syndication.” – Pacey to crazypants Andie McPhee

Joey’s a little bitch. She reminds me of Julie Taylor on Friday Night Lights throughout most of the series. And now she’s pulling a Julie by going for another guy whilst still dating someone else (although I am absolutely NOT comparing Dawson to Matt Saracen, because Matt was a near perfect boyfriend). JACK IS GAY DON’T GIVE IT UP FOR HIM. I mean we don’t know he’s gay at this point, but like, I know he’s gay.

Oh no – Dawson is pissed at Joey for essentially ending their relationship because she kissed Jack/’needs to make herself happy first’ and now we have to prepare for Dawson’s rage. Which looks like this:

Katie Holmes running away is like Phoebe running. It’s awkward and should be much better for a ‘tomboy’.

Notable Quote: “How can it be over? We can’t just say I love you for the first time and have it be over.” Dawson to Joey (Guess what, you can and it is. Except it’s not because apparently this back and forth will last their entire lives/the rest of this series)

I’ve failed to mention that Michelle/Jen’s hair is short and … out of control. Even 1999 thought it was a bad haircut.

In order to take a break from studying, the gang decides to take the ‘How Pure Are You Quiz’ from a girly publication that might be Jane magazine? Sample questions:

‘Have you ever been intimately aroused by a relative?’ ‘Experimented with bondage?’ ‘Engaged in asexual activity with a transvestite? A four legged creature?’ ‘Paid for sex?’ ‘Had an affair with a friend’s pet?’

THESE FOLKS ARE 16 YEARS OLD. When I was 16 I barely knew how to read let alone read these kinds of mags.

Chris (their rich classmate who invites them over to his mansion of a house to study/sleep with Jen) has a little sister who is the epitome of kids her age (i.e. ME) with a lack of fashion sense.

WHYYY is Dawson so pleased with his parents having sex?? I mean, yeah it means there’s a chance for them to get back together and put divorce aside, but still. It’s his parents HAVING SEX. Let’s look at the big picture here, Dawson.

JEN FINALLY SERVES UP REALNESS TO MONICA KEENA AND HER BITCH OF A CHARACTER:

“I don’t know where you come from or just who has the misfortune of being responsible for your existence, but you are a lying manipulative and cruel person and the fact that you are only 16 years old makes me feel more sorry for you than the any of the people in this room whose lives you are destroying. You’re pathetic.”

This guy takes Jen to a ‘party’ and I legit think it’s a key party for some reason, but it turns out to be a bible study?! LOLOLOL 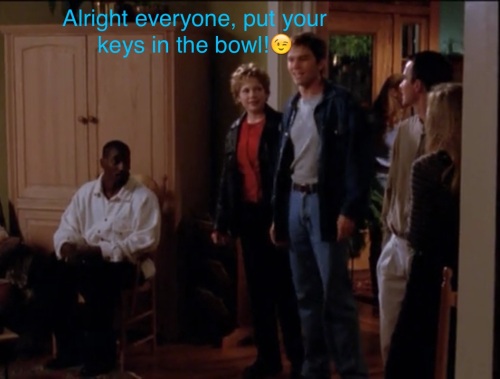 She’s All That star Rachael Leigh Cook is playing doppelganger Joey in Dawson’s movie based on his friendship/relationship with his BFF, and I can’t help but think she auditioned for the role but Katie Holmes got it instead. 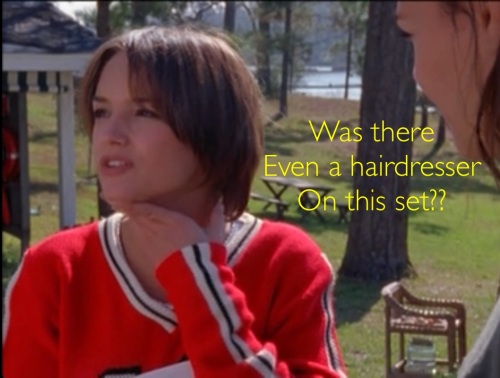 Also, how is it that the most sane and functional relationship involves an ACTUAL crazy person?!?! (Pacey/Andie)

Ah yes, the beginning of finding out that Jack likes boys. His asshole teacher forces him to recite his poem, in which he talks about romancing a dude, out loud in front of the class and basically Pacey defends Jack because he runs out of the room crying and completely embarrassed. And because Pacey’s the best, HE’S the one that gets in trouble but stands up for himself against the administration.

THIS IS THE FIRST REAL THING TO HAPPEN ON THIS SHOW AND IT COMES 14 EPISODES IN?? PACEY WITTER, DREAM MAN. I AM APPLAUDING.

Correct me if I’m wrong but wasn’t James van der Beek more of the heartthrob in during this time? Or was it equal? I don’t really remember because I was too into Leo and the Backstreet Boys to notice. Anyways, Joshua Jackson deserves all the attention and awards.

In order to stop people from staring and talking about Jack ‘possibly’ being gay, her solution is to kiss him in front of everyone? Wrong decision yet again, Potter. And why does Katie Holmes always look like she crawled out of bed and straight onto set?

Notable Quote: “I’m trying to get a sneak peek of your online handle.” Dawson to Joey re: AIM, but clearly he means something else.

Grams vs Ty, the time you thought super religious Grams was going to side with the teenager about being against homosexuality, but in fact she just proved she’s the best and defended Jack/ the gays. Yay Grams!

“If Jack is gay, he does not need your judgement, young man. The Lord above will judge him, as he will all of us. What he needs from you, from me, from everyone else in this world is love and tolerance. If anything, that boy is feeling scared and alone and he will need the understanding of his fellow man to help him through this. Let’s save judgement for someone much more experienced than you.”

Oh PS, Jack’s gay for real, y’all. And if you’re watching along at home, everyone take a shot when someone even says the word ‘gay’.

Notable Quote:  “Are you part gay?” Joey to her now gay boyfriend, Jack.

WELL, here’s something I never knew happened – Abby gets drunk with Jen at the docks and she hits her head then falls into the water and dies, despite Jen’s best efforts to IMMEDIATELY JUMP IN AFTER HER. Abby was a bitch, but no teen deserves to die, obvs. I just never knew this happened!

Honestly the Pacey/Andie scenes are the best of the show. She goes completely mental and starts seeing her dead brother and locks herself in a bathroom while having a complete meltdown. Her deceased bro Tim is in the bathroom with her and while she’s crouched on the floor it looks like she’s about to make out with him…? But Pacey is the best and manages to convince her to get out of there and leave her dead bro behind.

Notable Quote:  “Is this a French restaurant or French farce?” Dawson on the comedy of errors that happened in the fancy restaurant with his parents, Jen and Joey.

The season ends with Joey’s ex-inmate father dealing drugs yet again and Dawson is reluctant to tell her about her father’s dirty secret. Unfortunately, his cocaine dealing causes someone to throw a fiery brick into the family’s restaurant, burning it down to the ground. Everyone’s safe but Dawson finally tells Joey about the drugs, convinces her to turn him in and she vows she can never forgive him. Cue 10 millionth break up. Oh and Andie goes off to some mental patient rehab leaving Pacey (and Jack) back in Capeside.

Will Joey actually forgive Dawson or was she over it in like 2 minutes? Will Pacey stay loyal to Andie? Will Jack get a boyfriend? And will Jen pull her shit (read: hair) together?