By now, most kids are back in the school routine and still in the honeymoon period of getting to see friends, being in a higher grade, and brand new school supplies (just me?). With this new school year starting, I’ve been reminded that it’s been a whole DECADE since I began a whole new experience in college. Yiiikes.

Earlier this year, we spent a whole week reminiscing about our high school experience, but anyone who’s been to college knows that it’s a whole different beast than anything you’ve ever encountered in your previous 18 years of living. Whether you stay in your hometown, move to a different region of your state, or go across country, every freshman still gets that ‘Holy crap what am I getting myself into can I even handle this level of responsibility’ feeling on the first day they move into college.

For me, it was a unique experience to say the least. My parents and I loaded up our rental van and drove from Rochester to Boston with all my crap in the back. Here’s a thing to know about the college I went to: it’s right in the middle of the city. Like the “campus” is blocks of downtown Boston. This was the view from the building I lived in my freshman and sophomore years.

With that in mind, moving about 900 students in on a busy Boston street is no easy feat. A lane of traffic has to be used specifically for freshman, and it has to be done very promptly and efficiently to keep the flow of traffic moving. I remember we pulled up to the building that was soon to be my home for the next 2 years, and looked out the car window to see (and hear) a bunch of screaming, enthusiastic college kids wearing the same shirt and for some reason, were really excited to see my car pull up. After a few admin tasks were completed, I vividly remember the very first moment I stepped out of the car and the important girl with the headset said, “Everyone welcome Traci to Emerson!” and a group of about 15 crazy people said “WELCOME TRACI” and cheered and yelled and started stealing my stuff. No, really. Well okay, they were taking everything out of our car, placing it in carts, and hauling it up to my dorm room so I would barely have to touch a thing (I didn’t lift a single item. It was the greatest).

Me, when first getting to my dorm on move-in day

The kids in the shirts, I would later find out were “OLs”, short for Orientation Leaders, made up of Sophomore, Junior and Senior volunteers who have a lot of Dunkin Donuts coffee and glitter running through their veins. In more recent years, the OLs have taken to dressing up in colorful outfits to, I don’t know, make the freshman feel more welcome? There’s really no way to accurately describe the shock when it comes to the very first moments of move-in day, so here’s a video instead. Also take note of the dad at 1:18.

The rest of orientation week was filled with icebreaker games (THE ABSOLUTE WORST) at this event called Hooray!, a guy nicknamed the “Dating Doctor” who talked about dating and sex, and as a girl coming from a Catholic education for all the previous years of my life, this was quite a change. There was a boat cruise, an epic dance where all the OLs dressed up in various costumes and busted moves along to popular songs of 2004 (similar to this, but imagine it being 10 years ago), and this 1980s safety video for everyone that had never lived in a city before. Honestly, they showed this, and in my opinion, it’s the greatest tradition our college has. A Bahston cop, dramatic reenactments, horrible acting, I mean, really.

“ATMs: probably the greatest invention ever to exist.”

In the end, Orientation week was a good way to transition into college life and not feel so scared about the daunting task of “being in college”. So for you freshman out there who still feel scared or uneasy about your new life, just know that the next four (or five or eight+, depending on the interest in furthering your education or level of long-term commitment)  years of your life will be some of the greatest you’ll ever have. You’ll make lifelong friends, you’ll learn things about yourself, about others, about LIFE. Just enjoy yourself. If those crazy OLs can let go of their inhibitions and wear tutus and banana costumes on the streets of Boston, you can make it through your freshman year. 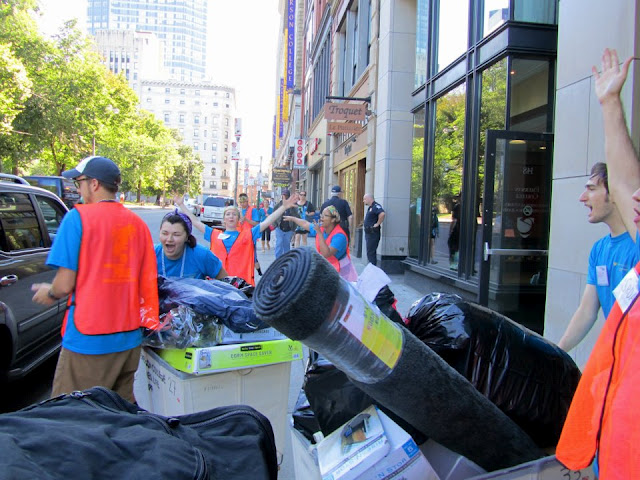 PS: Please tell me our school wasn’t the only one with eccentric move-in/orientation events! Did any of you guys have a similar or horrible experience?