Like wielding a Nerf Super Soaker or running in Moon Shoes, Are You Afraid of the Dark? was an opportunity for 90s kids to show their mettle. Some of us, like me and my buddy Nikki, even used to watch it with the lights off. Without fail, one of my older brothers would ask what we were watching. “Are You Afraid Of The Dark?”, I’d answer. “I’m not, are YOU?,”” the brother would ask. I fell into that trap every time. Then things would get real Who’s On First-y, as tired a gag in 1992 as it was in 1952. The show would come on, and by the end of the half hour, we’d felt like we’d really survived something – and not just good-natured sibling ribbing.

But we weren’t just watching slightly-spooky SNICK fare, we were learning. Some books and movies teach you how to be alive (The Fault In Our Stars, anyone?), but Are You Afraid Of The Dark? taught us how to be, and be with, the undead.

If you’re ready for some ghostly fun, hyperlinks take you to the episodes in question – until they disappear! SPOOOOKY. (OK, actually I just think they’ll be pulled from YouTube at some point)

If A New Family Comes To Town, They Are Not Living People 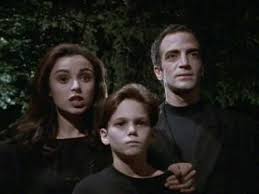 New neighbors? Do not greet them warmly and make them feel welcome in your community. That’s the lesson I learned from this children’s show. If you have new neighbors, they are probably vampires. Mom has a new boyfriend? Best case scenario, some strange man is banging your mom now. Worst case scenario: watch out on the next full moon, because your new dad is a werewolf.

If You Are New To Town, Something Horrible Will Happen To You

Getting used to a new town, switching schools, making new friends – these are real concerns for kids who move. But in the 90s, Nickelodeon didn’t coddle kids by telling them that everything was going to be just fine and they’d feel at home in no time. That’s some Highlights For Children nonsense. No, Are You Afraid Of The Dark? confirmed every child’s fears about moving. Bad things will happen. It IS the end of the world. The house next door has the ghost of a deaf girl writing backwards on the walls. Your aunt’s jacket will turn you into a ghost. Aunt’s houses are the most haunted – there is probably also the ghost of a little boy who froze to death hanging around. Your new basement doesn’t just have weird slugs after rainstorms, it also harbors an evil creature that’s into music boxes. You may nearly burn down your new home in a fever-dream. And when you make friends with the neighborhood kids, they’ll lead you in a game of Hide And Seek where the only thing you find is an uneasy encounter with human mortality. Bet Highlights For Children didn’t teach you that one.

You SHOULD Be Worried About Starting High School. High Schools Are Full Of 1950s Ghosts

It can be scary going from being the big fish in Middle School to being the small fish being haunted by a larger ghost fish in high school. Finding a prom dress is nothing when you could easily end up finding a 1950s prom ghost instead. Or hey, maybe your school ghost is a far-out 1960s hippie who died in a chem lab explosion. Could your school ghost be a sea-beast who lives in the swimming pool? Or maybe, just maybe, the school ghost is YOU and you just don’t know you’re dead yet.

Sidenote: Our “high school ghost” was some turn-of-the-century biddy named Victoria who coincidentally only hung around the theater department — you know, the area with all the super-dramatic kids who love making up grandiose stories to impress each other? There were some spooky parts of the theater, but that’s not because of ghosts, it’s because the costume room was a long-abandoned priest’s apartment with a creepy free-standing abandoned sink still in there, up a rickety flight of stairs on stage left. I’m not saying Victoria wasn’t real, because saying ghosts aren’t real is what makes them haunt you super hard, I’m just saying that my sister was involved in theater, is eight years older than me, and never had heard of her. Also the ghost’s “backstory” was, I’m pretty sure, lifted verbatim from a Fear Street novel.

Children’s Toys Will Hurt You

So far we’ve covered how terrible things will happen to children who move, have people move near them (so basically, children who live in houses), and go to school. What’s a kid to do, sit idly and play with toys? NOPE. Only if you want to play with the supernatural as well.

Dollhouses are obviously haunted, everyone knows that, but in Are You Afraid Of The Dark? we learned that they can also imprison you in permanent doll form, like a Toddlers And Tiaras contestant without all the Mountain Dew. Pinball machines can come to life. If a toy company opens in your apartment building, the only thing they’re really selling there is doom and horror. You may as well just go to summer camp, right? Yeah, there are dead Edwardian children trapped in the woods. I’d say that kids should just read books instead, but I think we all know that books can come to life or trap you inside their very pages.

It’s every kid for herself out there, so if you come across a homely, poor, or otherwise unfortunate child, IT’S A TRAP. Do NOT befriend them. I know your feelings will tell you otherwise, but feelings are just nature’s way of letting the weak get killed off by little girl ghosts. If the urchin next door has a shaggy, grown-out bowlcut, the haircut of an unloved child, obviously she was locked in a vacant house a half-century ago. The lonely kid with the bicycle is your childhood friend who you couldn’t save from drowning. And it goes for adults, too. The old lady who lives alone in a cottage isn’t a retiree whose kids live out of state, she’s a witch with a stash of shrunken monkey claws that she’s going to curse you with.

Sweet dreams, children. Everything you’ve been taught about school, friendship, and your community was a lie. Don’t let the bedbugs bite.

9 thoughts on “(After) Life Lessons From ‘Are You Afraid Of The Dark?’”