This month marks the 50th anniversary of the release of one of the world’s most beloved movies, Sound of Music. In honor of the milestone, the movie is being re-released in theaters, a special DVD edition is being sold, the cast (yes, even all the kids!) got together for a Vanity Fair feature, and as you probably saw at the Oscars, Lady Gaga slayyyed a medley of songs just before Dame Julie Andrews came out and the tears poured out of my eyes faster than you can say Edelweiss.

Like many people, Sound of Music has a special place in my heart. I grew up watching the two tape VHS version of the movie, and for some reason our copy got messed up at the end of the tape so the party always ended abruptly. It’s clearly stuck with me all these years.

Years later, I was cast in a production of Sound of Music as Sister Maragretta – no you shouldn’t really know who she is unless you’re a hardcore fan or have been in the show – basically my claim to fame was “Maria – makes me – LAUGH!! heheheeeheeeheeeee” *fakest laugh ever. For anyone that’s been part of a production, you know how much of an impact every show makes on you (good or bad, I suppose), and luckily for me this one was pleasant experience that I’ll always remember.

Then, when I was studying abroad in college, my friends and I spent the weekend in Austria, first in Vienna and then over to Salzburg, where they filmed a lot of scenes from the film. I’m not sure if everyone was 100 percent into it, but I feel like I basically conned my travel buds into going on the Sound of Music tour with me. Turns out, it was actually a fantastic four hour tour of not only SoM filming locations, but the ‘countryside’ of Austria as well.

So in honor of SoM’s 50th anniversary (and the nine year anniversary of us going on this tour this week!), here’s a guide to some of the stops we made on the tour, whether you’re thinking of going or just want to live vicariously through these pictures!

To preface, we went to Austria (as previously mentioned) in March. It is still winter there at this time. Because of that, it was cold and there was snow, but it didn’t deter (most of our tour). So, below are the gardens featured in the Do-Re-Mi scene, where Maria takes the kids running through Salzburg learning Solfège. 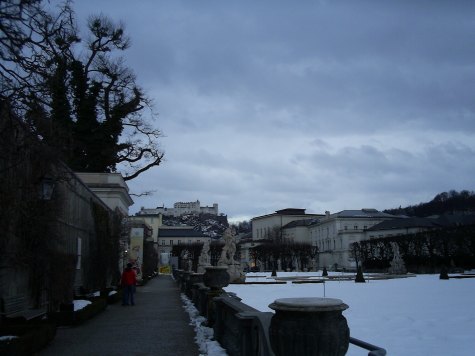 In the background on the hill, you can see the Hohensalzburg Castle, probably the biggest landmark in the city that served as a fortress dating back to 1077. During World War I, it was as a prison to hold Italian POWs and and Nazi activists. You can also see it in the background in the beginning of the Do-Re-Mi scene.

A view of the Salzach River. I don’t think anything was filmed here, but it was pretty.

The grounds of this palace was used as Captain Von Trapp’s backyard, more specifically the lake, that you can obviously see so clearly here (it’s the giant patch of snow frozen over). This lake is the one Maria and the kids fell into when they were out rowing the boat in their curtain gear. 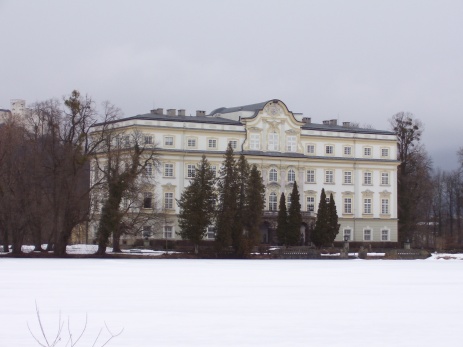 The famous gazebo, or pavilion, was originally located at Leopoldskron Palace. As the movie became popular, tourists went to visit it, so they moved the gazebo to Hellbrunn. Also, neither the 16 Going on 17 scene or Something Good scene were filmed inside the actual gazebo, those were filmed on a Hollywood soundstage *MOVIE MAGIC*. However, the exteriors of the gazebo were shot in Austria.

Miscellaneous Austrian village shot, because this is pretty and could also have been in the movie. 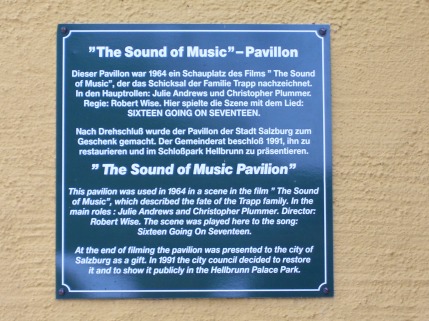 My eyes are closed because I’m trying to get into character.

A bunch of tourists, I tells ya. *these are my friends. the people in the background are not.

REMINDER that Something Good is one of the best songs from the movie. 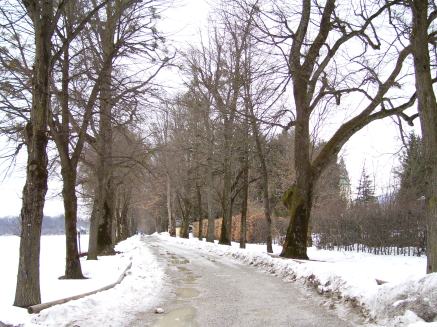 I want to say these were the trees the kids were hiding in, but who knows, I went on this tour nine years ago. Just pretend it is.

Again, I’d like to reiterate that it was winter and the quaint lake that was used for panorama shots in the film, and also where they had their picnic, was completely covered in snow. This is us in said snow. 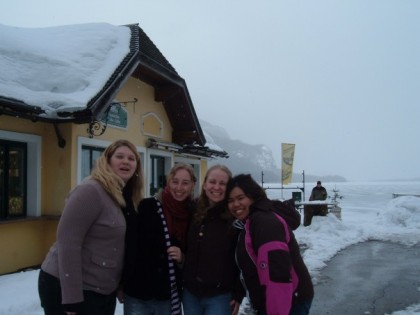 There’s a lake in there.

SPOILER ALERT: The Captain and Maria get married!!! And this is the church it all went down. It’s in the cute little super Austrian village.

I’m sure God is totally down with all these tourists taking pix, right?

Dancing around like the Von Trapp children. Also, perhaps more importantly, there was a restaurant behind us that had the BEST apple strudel. nomm

And that concludes our tour! Here’s a rando pic of Salzburg, because I don’t remember what it is, but it’s sah cuhyte.

Also, I wanted to include this picture because this is how we managed to keep our grades up while also travelling Europe. Unless you’re my friend Caitlin who apparently was doing sudoku. It was a really cool thing back then.