But the best part about this was the livestream available on the project’s website, which had a camera directly on Shia the entire time. The caveat was that there was no sound, so you couldn’t hear if he said anything outloud, or know which point in the movie they were in. There was a schedule available online as to the start time and list of movies playing (as I found out from a number of #AllMyMovies followers after rhetorically inquiring on Twitter), so plenty of folks at home, with no time on their hands apparently, could sync up with Shia. 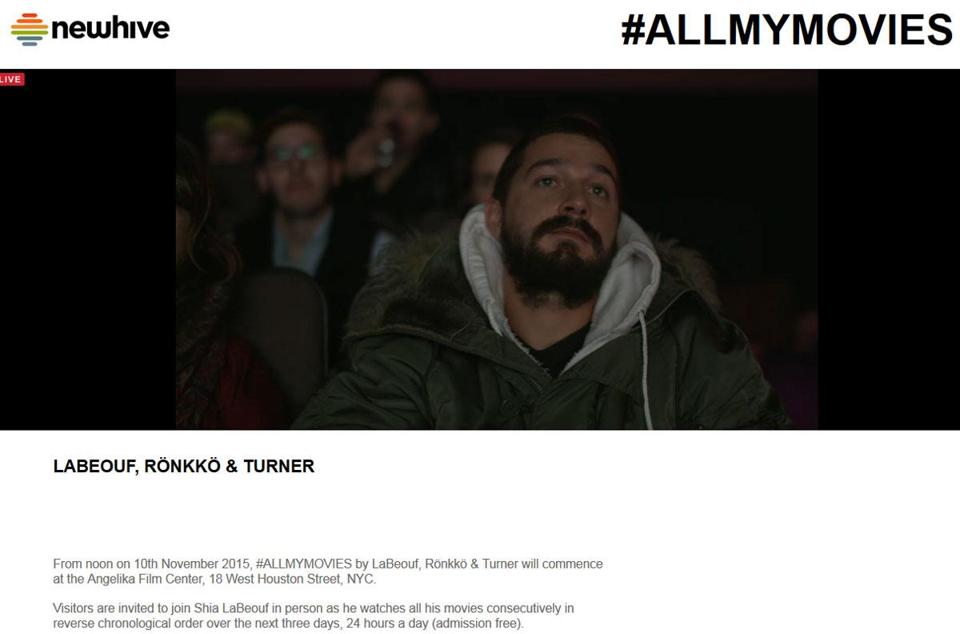 Legit. This is what one would see if they went to the live stream. After I realized nothing was wrong with my computer and there really wasn’t any sound, I started losing interest. Maybe it was because he was in New York and it was like 3am his time and he was catatonic anyways, or maybe he didn’t care for the movie. I didn’t even know what movie he was watching at that point, so like, who cared? But then I searched the hashtag on Twitter, and that led to a whole other world, and it all started making sense.

The dedicated fans who had stayed up into the wee hours of the morning had been following Shia since the beginning. Since Shia was the only static person in frame, they started to pick up the minutia of everything else around him, i.e. the fans in the visible background.

At one point during my viewing, there was a dude behind Shia that looked like Josh Peck. A blurry Josh Peck, which led to me researching if it was actually Josh Peck – it wasn’t. But that doesn’t mean there weren’t a fair share of “celebrities” in the audience. By celebrities, I mean the folks around Shia who got nicknamed by the Internet. There was Glasses Girls 1 & 2 during Constantine and The Greatest Game Ever Played, Kurt Fauxbain and Jack Sparrow in front of him at Surf’s Up and Hat Girl, who even scored a parody Twitter account. And her Hat got an account too. The Internet, man.

According to multiple #AllMyMovies-goers, video and photography was strictly prohibited inside the theater, and if fans had gifts, they had to give it to someone else who would relay the items to Shia. There were some people that decided to act like a true fan and ask for a pic with him:

Or act like a normal human and congratulate him on his excellent scene:

*a staff member at the Angelika said Shia went through 15 bags of Sour Patch Kids during his 3-day stay!*

Then you have that one person who fucks it up and legit causes you second-hand embarrassment even though you know it’s inevitable:

Aside from the fans, watching Shia’s reaction to watching himself was hard to take your eyes off of. Here are just a few choice reactions from his marathon:

Indiana Jones and the Kingdom of the Crystal Skull

Transformers: Dark Side of The Moon

This is what Shia LaBeouf thinks of his performance in 'Transformers: Dark of the Moon' https://t.co/Qkbig79xpS pic.twitter.com/x7vWC64KSR

*He basically hated all the Transformers films. At one point he even goes into the aisle and lays down to take a nap.

Shia LaBeouf watching Holes is everything to me. pic.twitter.com/C1JcCCPCsM

The Even Stevens Movie

Shia and the audience enjoying the ending of the EVEN STEVENS movie is actually a pretty special thing to watch. pic.twitter.com/sSz7OuOIsg

It’s worth noting that this FREE performance art piece has apparently been in the works for a year, so it’s not some paper bag type gimmick that he decided to do on a whim. In fact, a Twitter user noted that after Shia got arrested in Texas last month, he had tweeted his first line to every one of his movies sequentially, a move that obviously shows he had at least some thought into it. He even wrote on the wall of the Angelika thanking them for hosting the “crazy” marathon, proving he’s aware that the concept of watching all his films and capturing his response is insane.

But like any type of art, it’s totally objective. I don’t necessarily *get* performance art, but I understand it enough to consider it art. In this particular case, a number of reasons could make the case for Shia’s binge-watch as “real art”. Through the literal lens of the camera directly facing Shia, we see a number of reactions from the actor and the people around him. It shows the psychology of human interaction in an unlikely setting, their response to celebrity, the mere fact staying awake for lengthy periods of time can change your mental state. The same goes for Shia. I’m assuming he intended to view his movies in reverse knowing full well he’d be loopy by the time he reached the point where he was a child actor. As seen above, he seemed to be the most content and happy while watching Surf’s Up and The Even Stevens Movie (watch him watch it synced with the actual film. Cinnamon roll.) – albeit both are classified as kids’ films – one has to wonder if the reason he’s emitting so much joy is to show that he’s just like us – he sometimes longs for the days of innocence and finds comfort in a show like Evens Stevens, which helped him become a star and occurred during some of the most important developmental years of his life. Then there’s the whole fascination of watching Shia watch a screen for hours on end. Like I said, I fell victim to the FOMO, but it’s interesting to see how involved and passionate they get with something as simple as a livestream of a dude in a dark theater.

So, it goes back to this – what’s the point of this charade? Are we supposed to look inward and reflect on what it would be like for us to relive moments of our lives on the big screen with strangers for three days? Or does this put another notch on Shia’s “egotistical” nature? That here he is, doing a performance art piece, seeing his career as an actor in reverse, and perhaps he’s searching for what made him fall in love with acting in the first place? To watch his bizarre rise and fall in the industry? To show just how odd the idea of fame is in general? We might never know unless Shia explains it point blank to us, but to be honest, we don’t need that. We need to respect his desire to keep creating art that fulfills him. As long as he’s not hurting anyone in the process,  who cares? We’re talking about it now, aren’t we? And maybe that’s what he wanted all along.

One thought on “The Art of Shia LaBeouf”