Let’s take it back. It’s 1982, we’re not alive, and maybe you aren’t either. The wacky, Studio 54-era disco-and-drugs ’70s were over, but the serious perm and shoulderpad business of the ’80s hadn’t really started. If you wanted to pitch a tv show about normal-looking people who wear a lot of brown and go to a bar sometimes, you were right in the zeitgeist. That’s the world that gave us Cheers.

Okay, now let’s take it … well, a little bit less back: August 2015. We got together to knock out a quick Pop Culture Blind Spots post. Neither of us had seen Cheers and together we were going to change that. By the end of the pilot, we were absolutely obsessed with this 33-year-old show that everybody else already knew was good. It became clear that we needed to devote more than a single post to Sam (The Luke Danes of 1980s Boston), Diane (Shut Up, Diane), Our Boo, Carla and all the others who we’d prefer you not tell us about because we haven’t seen the whole series yet, thanks. We shelved the post until we had more time to devote to the series.

So here’s what’s up: the last Friday of every month we’ll be posting Cheers Chats, where we discuss the top-ranked episodes of the 1980s smash hit, Cheers. Come join us, because our love for this neighborhood bar and grill is only going to grow. If you love the show too, or are watching along, jump into the comments … because sometimes you want to go where everybody knows your name.

Episode 1.01: Give Me A Ring Sometime

M: Netflix says Cheers is from 1992. Like … is it sure? I feel like this started in the late 80s and that I was super, super little when it was on. I also felt like it was one of those shows that ran for a million seasons.

T: Who do we write to about this? Mr. Netflix? I’ve got a strongly worded comment box for you.

T: This is the first time we’ve live-blogged together in the same room. And it’s weird.

M:  I feel like we’re about to turn it into the chit-chat club up in here and forget to type.

We love this tune by super well-known singer/songwriter Gary Portnoy, but in the pilot, they play the theme song for real and it sounds kind of depressing? Maybe it’s the old-timey cartoon illustrations of folks in the 1900s in the opening credits (because they’re like, all dead)? Either way, this song still holds up.

Later on, they do that thing where they play the theme song, but instrumental and sad, before what would have been the commercial break.

Last week, Seth Meyers did this absolutely brilliant sketch about actors and Boston accents and it is so incredibly dead on. In saying that, not everyone in Boston has an accent, and if they do, it’s not always thick. At one point in the pilot, this kid attempting to get a beer at the bar says, “How bout a beeahh (beer), chief?” Stop exaggerating. Like, did he “Park his car in Hahhvahd Yahhd” too?? (NO ONE DOES THIS).

Also,  it felt like everyone was talking like they’re from a 1930s movie. At one point, it felt so garbled that we had to rewind three times then turn on closed captioning to figure out what they’re saying ( it was: How long is the wimp convention in town?”). Again, everyone is very muffled, like if you listened to that 1930s movie through one headphone.

The Luke Danes of 1980s Boston

So Ted Danson – kind of a hottie? We never really put too much thought into him before, but NOW we are. You want to know why? Because Molly realized that Sam Malone is such a Luke Danes (Traci promptly shrieked “That’s why!” and dissolved into laughter upon this epiphany. She also started sweating because of this fact). (Note: That was very diplomatic of her, but if Traci was sweating that’s because it was August and 90 degrees and I don’t have an air conditioner. Enjoy the cooling breeze of a BOX FAN, friends! – M)

The Netflix description for the pilot reads: “Sam Malone, an ex-baseball player turned bar owner, operates a saloon that’s always filled with quirky customers and even more eccentric staff.” Hey, you know who ELSE played baseball?

scott was seriously too handsome to be a baseball player. he needed to share his good looks with the rest of the world as an actor.

GUYS I CAN’T UNSEE IT. I CANNOT. Also, does that make Diane Lorelai? Let’s dissect this – Diane’s husband-to-be is a professor at BU who references Proust – MAX MEDINA, MUCH?? And at some point, Sam gives Diane a drink JUST LIKE LUKE GIVING LORELAI COFFEE. 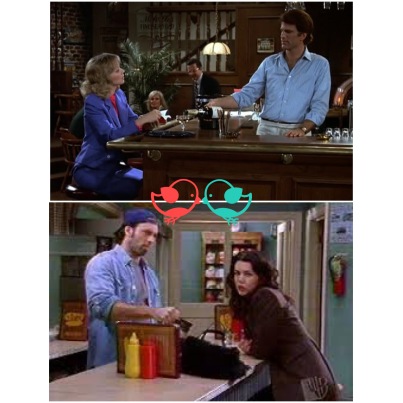 Unrelated to Luke Danes, Sam is a recovering alcoholic who owns a bar. In season 7, are we going to see a dark storyline of Sam battling his demons and has to go to rehab? (Read: Ted Danson filmed Three Men and a Little Lady). Probably. Picturing a Bailey Salinger plotline.

Rhea Perlman busts into the bar and immediately goes on a rant:

“OK, I’m late! My kid was throwing up all over the place. You don’t buy that excuse, I quit. I don’t work for a man who has no compassion for my children. And you’re not exactly swamped here. I’m usually punctual. If you don’t like it, fine. This ain’t such a great job. I’m gonna change.”

A) Love her already.

B) She’s younger than we remembered.

C) She’s clearly the feminist of the show. Later on, she suggests to Diane that she stop waiting around for her fiance to come and just leave him. This coming from a woman whose husband used her to go to TV repair school then left her and their 4 kids behind once he graduated. All day Carla. All Day. Forever.

(We used the LLOL acronym when we’d talk on AIM as teens – it means LITERALLY laughing out loud, as opposed to LOL as the typographic version of a smirk)

We genuinely LOLed throughout this entire episode. Like way more than we typically would during a pilot.

Carla, after answering the phone: “Who isn’t here?”

Every male sitting at the bar in the middle of the day: “ME!”

Cliff: Women have fewer sweat glands than men, but they’re larger, more active. Consequently, they sweat more…  (To Diane) How about you, miss? What are your perspiration patterns?

Sam: Still working on that novel?

Coach: Yeah, coming on six years now. I got a feeling I might finish it tonight.

Coach: No, reading one.

(Characters we don’t expect to be seeing again.)

This episode features Diane and her version of Rachel’s dentist husband. We hadn’t bothered to remember his name, which is a sign he might not be returning for the rest of the series. 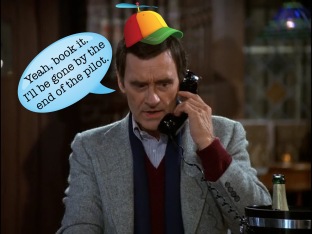 T: Also, I haven’t even bothered to remember Diane’s fiance’s name. I’m assuming he’s gone by the end of this episode.

M: Where Everybody Knows Your Name… except Traci and Molly. Who don’t care. He is very old.

T: Barry is going out to talk to his ex-wife, and leaves Diane behind, but why is he leaving her in a bar by herself in Boston? This bar is not the only place to visit in the city.

M: Old North Church is open, like, all the time.

Carla (answering phone): Cheers. Just a minute. (To Barry) If you’re not, I apologise, but is your name Sumner Sloane?

(We just have a feeling we’re going to be saying Shut Up, Diane at our screens KIND OF A LOT.)

Diane’s got a book out and a bunch of pencils while sitting at the bar. GO TO THE LIBRARY, DIANE. To add more to the Gilmore Girls parallel, Diane could also be one of Paris’s friends, Louise and/or Madeline. Or Lindsay’s crazy mom Theresa. Or the mom who convinced Luke and Lorelai to speak at Stars Hollow High for career day.

Diane and Sumner act rich, even though we’re pretty sure professors don’t make that much money.

Diane uses the bar phone to cancel the flight reservations to Barbados since Sumner hasn’t come back.  A) a PHONE. B) She knew the number to the airline by heart? C) She immediately got through to a customer representative? She says she wants to change the flight reservations and Traci screams ‘THEY’RE ON IT!’ As in that dumb Sumner took his ex-wife to Barbados on his wedding day to Diane. Not even mad that we called it.

Diane says “now look, Buster!” because this sitcom was written by a man at a typewriter wearing a trilby with one of those journalist tags in it.

Sam ends up hiring Diane to be a waitress after Barry/Sumner leaves her, but why is she acting like a hostess? I thought bars don’t have hostesses? All Day Carla would NEVER.

T: We’re at the first scene between Sam and Diane and TBH, I ship it already. Why am I so into Ted Danson right now?? 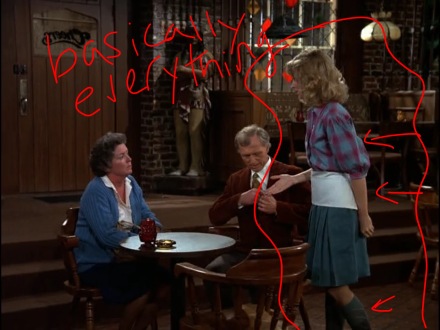 Diane. It is your first day on the job. What are you wearing? This plaid peasant shirt. Why is the apron so short? Is this a denim skirt? And with these knee highs? 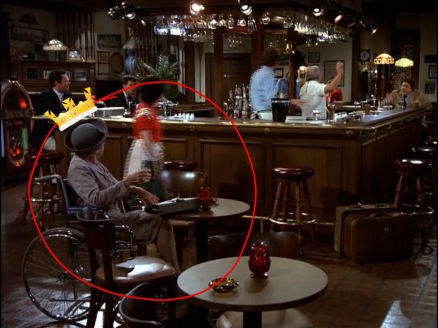 This elderly lady is living her BEST LIFE. In a wheelchair, wearing a fancy hat, and sipping on a beer. Goals.

We are Team Carla All Day, but can we just discuss this empty purse? She’s a mother of 4, why is it filled with nothing. Also these pants. V 80s.

(Raising a glass to our new favorite old sitcom.)

We literally had to adjust the TV set during Cheers because we thought it was too dark. The TV was fine. The show is dark. That’s also why we weren’t watching it in 1992. Too dark, no appeal to 6-year-olds. But now we’ve seen it, and while we shouldn’t feel surprised that the most beloved sitcom pilot of all time is good, here we both are. Those 22 minutes went by so fast, which is what we were afraid was going to happen. Looks like we’ll both be binging on Cheers for the next several months. Like Sam of two years ago, we think we may have a problem (too soon?).

Next Up: We are basing our watch list off of AV Club’s 10 Episodes That Show How Cheers Stayed Great For 11 Seasons  (plus one, because the Pilot didn’t make the cut). We’re going chronologically, so stop by next month when we’ll discuss Episode 1.08, Truce Or Consequences.

7 thoughts on “Cheers Chats #1: Give Me A Ring Sometime”