Michelle Tanner, fashion maven, is apparently too busy to live in a row house with >10 other people. At least, that’s the party line for why the youngest Tanner will not be appearing on Fuller House. Like Mary-Kate and Ashley Olsen, Michelle is a fashion designer living the high life in New York City. Is this really surprising? We’ve already covered Ashley Olsen’s statement that Michelle’s wardrobe was made of cut-down designer pieces. Michelle wore a lot of sunflower hats, giant buttons, and clown sweatshirts, but it was the 80s and 90s. Who are we to say the top designers weren’t going a little overboard on the whimsy?

In the spirit of Michelle Tanner, Fashion Icon, we’re going to look at how the other Tanner girls were dressed back in the day — taking it back to one of our OTHER favorite 90s shows, House of Style. 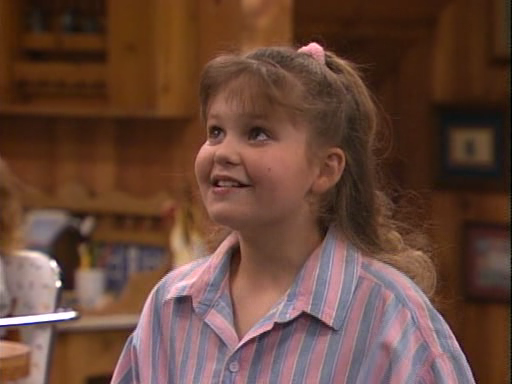 In 1987, those unfortunate mall bangs and shoulder pads hadn’t trickled down to Donna Jo Margaret Tanner. Deej wore washed-out pastels, simple t-shirts, and comfy sweats. Bangs were decidedly non-teased, and hair was worn long and probably un-permed. Remember when we discussed those weird geese in bonnets that were popular in 80s and 90s home decor? This is how a woman with ‘country geese’ in her house would dress her 11-year-old daughter. There’s nothing here that Candace Cameron (Bure) should find embarrassing: for an 80s kid, she is getting off very easy. 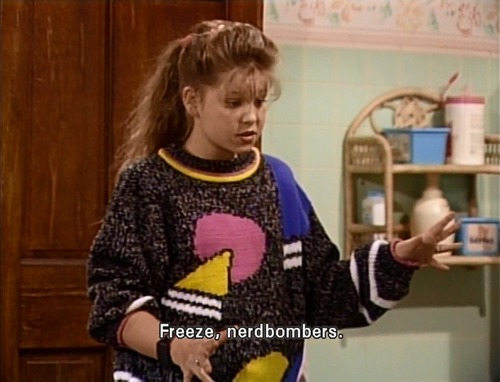 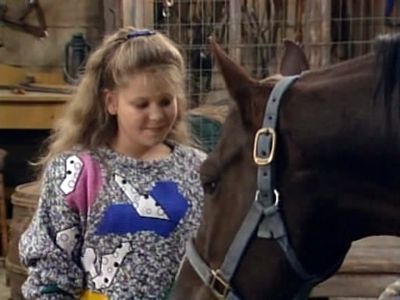 Let’s call this D.J.’s transitional look. Not the pastel little-girl style of the first season, but not a full-out teeny bopper, either. Chunky knit sweaters weren’t JUST for teachers at Christmastime in the late 80s. It was a way to add some humor and color into those crisp Bay Area winters, I guess. Like most of us, D.J. had some awkward fashion years around middle school. Unlike most of us, D.J.’s character was going through a ’13-year-old Cathy comic’  phase where she was basically a middle-aged woman. Sometime around junior high, Deej started dressing like a high-powered woman of the 80s, except that she was a child. Her hair was permed and teased, as was the style of the time. She wore a lot of vests that she didn’t have to be wearing. There were bright-toned blazers with some very of- the-moment Michael Jackson-style epaulets. Dainty florals and schoolmarm chic were popular and – am I losing it? – kind of cute for a while. I just looked at these dresses and thought “wow, that is refreshingly age-appropriate,” so don’t worry, if I ever have a daughter she’s definitely gonna hate me when she’s a teenager. Deej went to high school, got a boyfriend, loosened up, and started wearing flannels. Which, during this particular era, was more universal and not like a subversive Seattle grunge thing. 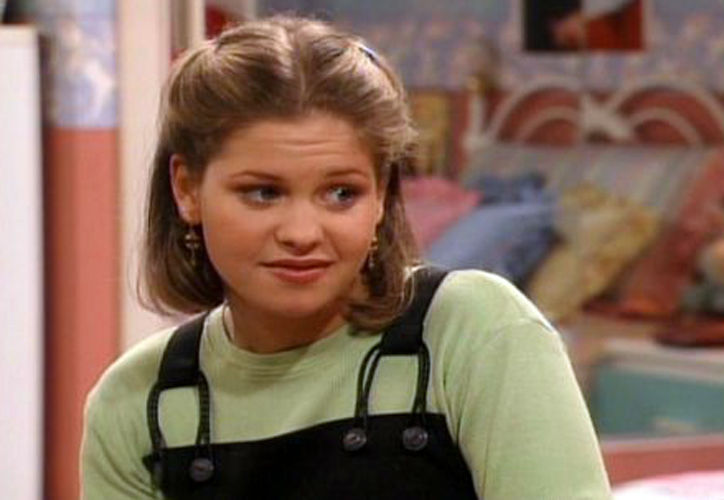 As in, she looks just like the girls in the copies of Seventeen magazine I used to sneak-read when my sister got them in 1995. This was that fun Clueless era when mod accents, A-line silhouettes and athletic influences made teen fashion its own category. Deej favored slouchy faded-wash jeans and bodysuits for casual wear and short but not mini-short skirts when dressing up. Plus Candace Cameron got that cute bob and started to look like a trendy college girl instead of a goofy sitcom kid.

In the first few years, when Michelle was strictly in nonspeaking baby territory, Stephanie was the resident cute little kid. And she was GOOD at it: I remember watching reruns with friends in college, and all of us being stunned because little Jodie Sweetin actually had great delivery and timing. Early on, costumers played up the adorable little kid angle. They kept Stephanie in the same pastels and unteased hair as D.J., when at this point in the 80s there were a lot of loud prints and weird bangs going on in the outside world.

Foreman Of The Sass Factory Stephanie

Stephanie got older, and the Full House writers got more and more obsessed with catch phrases. They established Stephanie as the household sass. Jodie Sweetin got to rock a lot more neon patterns and weird prints, plus she got a perm. 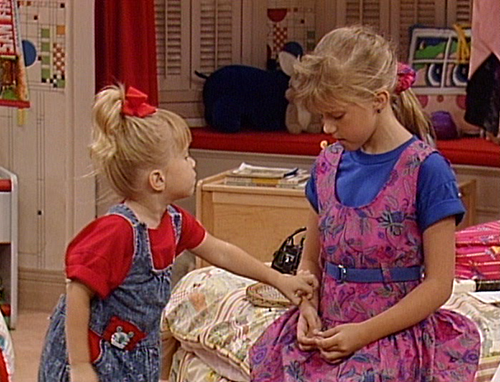 The perm came down and the bangs came up, and it became clear that Stephanie was the cool one in the family. Stephanie really got to shine as the aspiring young hip hop dancer that she was.

By the 7th season, Deej was too much of a 13-year-old Cathy Comic to give her many ‘edgy’ teen storylines (I mean, the time Jesse thought she was drinking and she wasn’t, I guess?). Michelle was now the cute kid. That mean that Stephanie had to be the ‘rebel.’ You can tell because she went to make-out parties, hung out with strange boys at the food court, didn’t practice for the talent show and wore a midriff-baring top.

9 thoughts on “Full House Of Style”