This is Ryan Lochte:

This is also Ryan Lochte:

But if you’ve been paying attention to Olympic swimming since 2008 or watch reality TV or have paid any attention to the news over the past few days, you already know who this is. Ryan’s been embroiled in a bizarre case of “Who’s Telling The Truth”, after he and three other members of the U.S. Olympic swimming team (Jimmy Feigen, Gunnar Bentz and Jack Conger) stopped at a gas station to use the bathroom after a night out. One of them “committed an act of vandalism” and as a result, they got into an argument with two armed gas station security staff who brandished their weapons. They demanded the swimmers to give them money for the repairs of said vandalism, and once they gave them money, they were allowed to leave. In Lochte’s version, says they got held up at gunpoint by men pretending to be Brazilian police. All this in Rio, a city that was already plagued with rumors of its criminal activity.

It’s truly one of the most outrageous stories to ever come out of the Olympics, but in a nutshell, this is what’s happened so far after Ryan came forward with his story:

What. Is. Going. On? Who’s telling the truth? Are Lochte and co. victims of attempted robbery, with Rio police trying to save face? Or are the U.S. swimmers swimming in B.S.? As the investigation on #LochteGate continues, another mystery has come to our attention – the fact that maybe, just maybe, we might be semi-attracted to Ryan Lochte? Using evidence gathered throughout the years, we argue the pros and cons, point and counterpoint of why this man could be our favorite male sex symbol at the moment.

Point: I am attracted to Ryan Lochte

Sometimes I think I really missed out on picking up swimming as an extra-curricular.

Counterpoint: I am unattracted to Ryan Lochte

No. No to the grills.

Point: This is Ryan Lochte 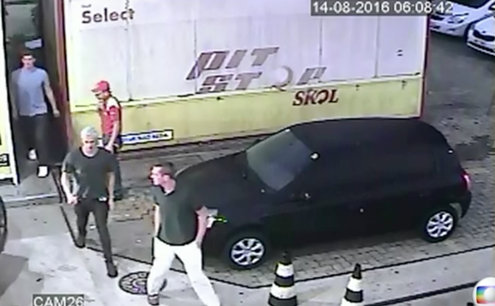 Is Sarah Koenig already recording phone calls with Jack Conger in Brazil, or…?

Point: His relationship with Michael Phelps

Counterpoint: His relationship with his mom.

In 2012, Ryan Lochte’s mom bragged about how many one-night stands he had. There’s also a theory that Ryan’s current snafu (/diplomatic crisis/ waste of government resources) is due to him lying to his ma about what went down during his wild night out. I think we can all agree that those guys whose moms back up their terrible choices well into adulthood are not the ones you should spend your time on.

The smile was an accident of birth. The hair was a choice.

Point: Knows the words to the national anthem?

Point: Knowing he could be the man of your dreams

Counterpoint: Knowing he understands (kinda) what dreams are

Point: He has a boylike charm to him

It can be endearing!

Counterpoint: He has a teenage boylike demeanor to him

Ryan Lochte is like that guy in high school that was uber athlete and would want to cheat off your test so he could play in the game/meet that night and is not the sharpest tool in the shed.

In the photo above, Ryan is legit putting the gold medal he won at the World Short Course Swimming Championships in 2012 around the neck of a nine-year-old Turkish fan. Lochte explained that when he was younger, he asked an unnamed Olympian for his autograph, but he said no. Lochte promised to never do that in his career.

I continue to get life from this video.

Point: He’s one of the best swimmers of our time