The Rosie O’Donnell Show ran from 1996 to 2002, and even though we watched it to the bitter end we somehow always associate it with the ’90s. When I think of Rosie guests, it’s people like Macy Gray, cast members from Ally McBeal, and throwbacks to Rosie’s 1970s childhood like the Osmonds. However, there are some modern stars we always forget were active in the Rosie era, so it feels like a total time warp seeing them as guests on The Rosie O’Donnell Show.

The Cast Of Harry Potter

Harry Potter and The Rosie O’Donnell Show had a brief overlap – Rosie even campaigned to play Molly Weasley, and while Julie Walters defined the role I bet she would have been great. However, with the last movie coming out in 2011 I tend to forget that Harry Potter And The Sorcerer’s Stone was a 2001 release: firmly in the early 2000s. It doesn’t seem possible that it has been 15 years since Harry Potter first hit the big screen, until you see how tiny the kids were here and it feels like when one of your friends posts a #TBT baby picture.

We have long loved Mae Whitman as Parenthood’s Amber Braverman, a real-life Friday Night Lights superfan, Ann Veal (her?), and a Dawson’s Creek Live Reading participant. But let’s not forget that before all this, she was one of those 90s child actors who was in EVERYTHING. You might remember Mae from One Fine Day, When A Man Loves A Woman, Independence Day, and as Sandra Bullock’s daughter in Hope Floats. It’s rare that a child actor maintains such a solid career through adolescence and adulthood. It’s even more rare to create such distinct child and adult personas that we almost forget this adorable moppet is the same cool girl who cracks us up on Twitter on a weekly basis.

Lea Michele first entered our consciousness thanks to Spring Awakening, but there’s a wide audience who didn’t really know who she was until Glee. We didn’t know it, but we were actually familiar with little Lea long before that. In 1998, Ragtime was all the rage (in our circles, anyway) and Lea was the wide-eyed, precocious little girl. Also: AUDRA. 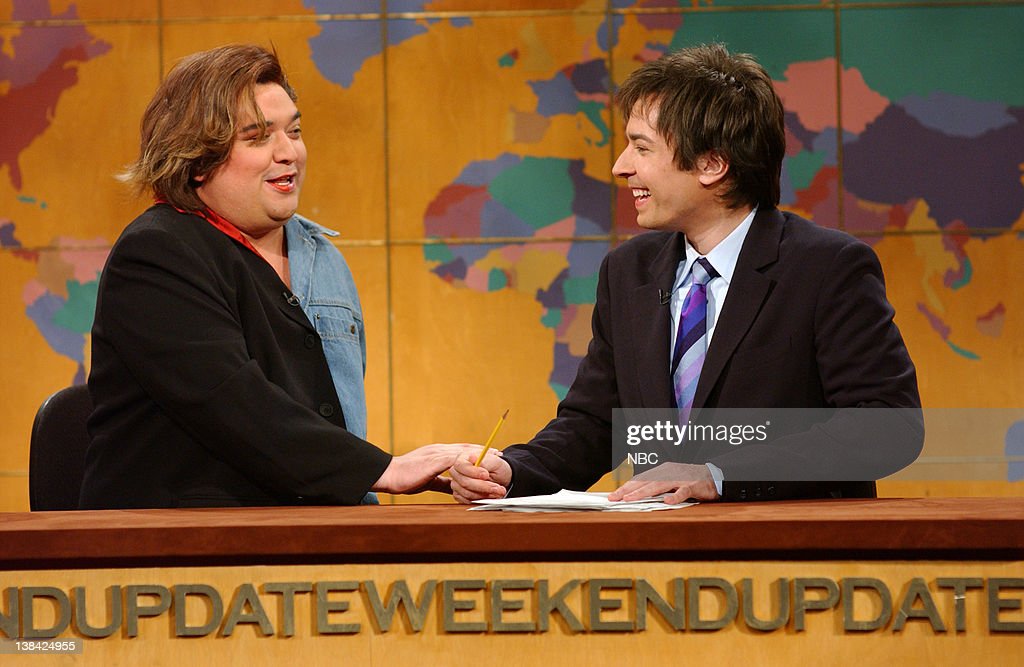 We certainly knew Jimmy was around in 2001 – we had massive crushes on him that we’d discuss in study hall and at lunch – but it was early in his SNL career and he wasn’t really doing much press yet, so it’s surprising that he was on Rosie. We had no clue he’d be a wildly popular talk show host in his own right over ten years later.

Alas, there is no video of the appearance, so enjoy this photo of Jimmy and Horatio Sanz as Rosie.

I know he was  lil when he started, but Bow Wow as an actual child rapper on Rosie is something I cannot quite remember. But it’s true, he was there – sadly, with no video to prove it. Woof.

Jennifer may be a rom-com and movie mom favorite now, but in the early 2000s she was best known as the star of Alias … to other people. To us she was primarily the flirty, 30 and thriving Jenna Rink in 13 Going On 30, which didn’t come out until 2004. That’s why it feels so weird knowing that Garner was on Rosie in 2001 promoting Alias, a show I admittedly never watched.

We briefly mentioned Lauren’s appearance earlier this week, as she showed off her “skills” during a craft corner segment on Rosie’s last show of the series. But months before, and nearing the end of season two of Gilmore Girls, Lauren appeared on the show for the first time, and Lo and Ro kicked it off right away. I have always been a fan of LG’s TV interviews because she always comes off charismatic, fun and awkward all at the same time (see: all Ellen interviews), and in 2002, this was just the beginning of Lauren’s rise to fame and her journey with Gilmore Girls. BECAUSE I STILL CAN’T BELIEVE IT’S HAPPENING.

I sometimes forget Hayden was a child actor. But then I remember she played Ally McBeal’s daughter and it all comes screaming back to me. Before she played a country music star on Nashville, she proved she had the chops to be a pop star by singing Britney’s (You Drive Me) Crazy during this interview and bless her heart, it feels like she’s been practicing the bit with her stage mom, whom she keeps looking at off camera. Young Hayden is cute, but I think I prefer confident adult Hayden much better.

Speaking of Ally McBeal… actually, let’s back up a bit. Josh Groban was just 17 years old when superproducer David Foster called Josh’s vocal coach asking if he had any students good enough to rehearse with Celine Dion at the 1999 Grammys. She was set to perform The Prayer with Andrea Boccelli, but because he couldn’t make it, Josh filled in, and Rosie was in awe after hearing him during rehearsals – this was the year she hosted the Grammys. She invited him to her show, as seen above, and because of this interview, Ally McBeal creator David E. Kelley created a role for Josh on his show, and the rest is history. Also, Josh is so nervous and shy here it’s adorable and nothing like what he is now.

Sometimes when you know actors from two completely different shows, it throws you off when you hear they’ve been friends for years. That is the case for Orange is the New Black’s Lea DeLaria and Modern Family’s Jesse Tyler Ferguson, who both starred on Broadway long before their respective award-winning shows. Here they are performing a number from On the Town, and it’s nothing like you’ve seen them before. Ok, maybe excluding Jesse.

When doing research for this, I saw the third guest in a season one episode titled as “High school student and NBA draftee Kobe Bryant”. I’m not even a big basketball fan, but this is iconic. Kobe, 18 at the time, had signed a three-year $3.5 million contract with the Lakers and he hadn’t even played college basketball. Again, like Bow Wow video from 1998 is scarce, so just trust he was on the show.

Technically Kate had a few films under her belt before this interview, but it’s just a treasure of a vid because she is actually doing press for Titanic. It’s her first time on the show, and Rosie wishes her the best of luck as an actress. And like we all knew in that steerage party when she went up on her toes, she’s been knocking it out ever since. Also she talks about Leo and their true love.