Rosie O’Donnell may be one of the most famous talk show hosts of the 90s and early 2000s, but we like to think of her as one of the most famous FANS, too. So deep was Rosie’s fondness for her favorite things that when we were discussing this post, we came up with dozens of musicians, games and foods that Rosie adored – even though it has been nigh on 14 years since The Rosie O’Donnell Show left the airwaves. While we like to think we share some of Rosie’s gusto, the fact is that we will never love anything as much as Rosie O’Donnell loved:

M: Rosie thought kids were punny (other thing Rosie loved: puns), but most of all, she was the ultimate kid-friendly adult. She actually LISTENED to kids, acted like their opinions and stories were legitimate, and didn’t ask them condescending questions. There’s a chance I’m conflating Rosie with Golly, her character in Harriet The Spy, but probably not.

I also always loved that Rosie seemed like a parent who genuinely got a kick out of her own kids, and I refuse to believe that Parker is a grown man because I still can hear Rosie’s Parker imitation.

M: You know when you’d get a cast recording and listen to it over and over again? And maybe you still do that (ahem – Hamilton)? Rosie was a TV-sanctioned adult who did the same thing. Rosie adored showtunes and musical theater actors, and all of the hottest shows of the 90s and early 2000s performed on Rosie. It didn’t seem weird at the time, but there are very few talk shows that you can count on to feature up-and-coming musicals. There’s a lot to say here, so we’ll be revisiting this topic later in the week.

Of course, no mention of Rosie and Broadway would be complete without a nod to her tenure as Rizzo in Grease.

T: Remember right after her show ended, she invested in a musical called Taboo loosely based off of Boy George? Don’t worry, it got mostly bad reviews and closed after 100 performances, so unless you’re a crazy person like we are, you wouldn’t have remembered just how deep her Broadway love runs.

M: Rosie loved Broadway, and Rosie loved kids, so it stands to reason that Broadway Kids were Rosie’s jam – to the extent that she created Rosie’s Broadway Kids (now called Rosie’s Theater Kids), an organization that gets kids involved in the performing arts. However, during our childhood the Broadway Kids were at troop of polished musical theater kids who sometimes performed on shows like Rosie. I remember watching them through a lens of admiration mixed with envy. I feel like Lacey Chabert was always involved, but that can’t be possible.

T: I do know her position on Ring Dings, because audience members got that and milk before the show.

T: There are few talk show hosts who can get away with launching rubber balls into the audience and make it look cool. Just imagine Oprah doing this for a second. And that’s OPRAH. When Rosie flung these into the crowd, it suddenly became an interactive show and added a sense of innocent fun unlike any other talk show on TV. It became so synonymous with her show that Koosh sold a special Rosie O’Donnell Show version of their Koosh Fling Shot, as seen here and the one sitting at my home collecting dust.

M: I got one of these at the store after the NBC tour, c. 1998. I don’t keep things so I got rid of it sometime in high school, but I sort of wish I still had it.

T: If there’s anything you took away from watching Rosie in the 90s, it’s that she had an obsession with two people: Tom Cruise and Barbra Streisand. If you recall, Rosie had a soundboard that played audio clips next to her desk, and anytime she’d talk about her deep love for her celebrity crush, she’d play “Tommy, can you hear me?” a line from a song of the same name by The Who. She campaigned for him to be on her show, and when he finally made it, it was like watching Jim and Pam kiss for the first time. Rosie invited fans into her life by sharing personal anecdotes that made it seem we had been friends growing up in Commack, Long Island, and we were cheering her on as she lived out life long dream. I mean, while rewatching this clip, I legitimately said out loud (to no one), “THIS BRINGS ME SO MUCH JOY!” Especially if you forget about all of Tom Cruise’s persona.

M: When we were doing our Rosie Week research this summer, we were both floored by how quickly into the show’s run Tom appeared (plus a few others, like Donny Osmond). The buildup was so huge that at the time, it felt like years before “my Tommy” was a Rosie guest.

T: As mentioned, Rosie’s other love was Barbra. She had loved the icon ever since she was a kid, not only because she enjoyed her music, but it was a common interest she shared with her late mother, who died of breast cancer when Rosie was just 10. She even used to amuse her mom by impersonating Barbra, so it was always like a maternal fan relationship with her.

In that first interview with Babs in ’97, I distinctly remember tearing up because Rosie was tearing up, but I feel like anyone would after watching Ro interview/meet her lifelong idol.

“For every boy and girl out there watching, dreams do come true, please welcome Barbra Streisand… You were a constant source of light in an often dark childhood. You inspired me and gave me the courage to dream a life better than the one I knew. I am profoundly grateful to you in so many ways.”

M: Rosie seemed so genuinely delighted by McDonald’s toys that it didn’t occur to me until I was writing this post at age 30 that it could have been a marketing tie-in. And honestly? I still think she really liked the toys. Rosie always had ALL of the Teeny Beanie Babies, even the “rare” ones.

T: Rosie probably had the Princess Diana one, LBR.

M: Thing from my childhood I DIDN’T KonMari: My Princess Diana Bear. That thing was gonna pay my college tuition.

T: When you’re living in America, at the end of the millennium – you are what you eat. Which is why Rosie started the Chub Club, a campaign to get herself and viewers in shape. The motto was “Eat Less and Move More” and basically served as a virtual support group to lose weight. Over 300,000 people joined, and was a staple on Rosie’s show. She’d invite Chub Club members to the show, discuss the right foods to eat and try out exercise tips. If I wasn’t a tween at the time, I definitely would try to do this for the swag alone (I think there was swag, at least).

M: I love how no-fuss this idea is. There are no weird things with tracking carbs or fats (it was the 90s) and you didn’t have to do Billy Blanks. Everyone on a diet in 1999 had to do Billy Blanks workouts before this. That’s just how it was.

M: Doesn’t ring a bell? Here, let me help. Scope did a poll that named Rosie one of the least-kissable celebrities. Yeah. If you think the media is nasty now, the 90s were possibly worse. Anyway, Listerine disagreed and donated $1,000 for every celebrity guest who kissed Rosie. In the end, it was a lot of money.

T: This video includes two of our favorite people in the world. And if you’re wondering what the timeline is here, LG appeared on Rosie’s very last episode in 2002 aka season two of Gilmore Girls. Yeah, I know it’s weird. BUT THIS IS A DELIGHT. “Shells are very big for Summer 2002”.

Anyways, Rosie was so cool during this time that she made even crafting hip (amongst the suburban mom demo and kids under the age of 14). She even had a segment called Rosie’s Craft Corner, and she’d usually have either her official show crafter named Christina, I think? Or a celeb guest, as seen above. No lie, I bought Mod Podge solely because Rosie decoupaged all the things, so natch, I did too.

M: Rosie freaking loved being Irish-American, and it was so refreshing to have a celebrity cultural spokesperson who wasn’t a Kennedy. (Yeah, lots of celebs are part-Irish, but there’s a difference between being raised doing Irish dance and going to the AOH verses just knowing some great-great-great grandparent was supposed to be from there). So did Rosie sometimes say things were “Irish” things when they were really just her family (I recall cold sores and having a short upper body)? Sure, but who cares? She helped maintain the Irish reputation for being hilarious and affable, and we all owe her a Guinness for that.

T: Donny Osmond, former teen heartthrob and longtime Mormon singing icon, made a cutting joke about Rosie’s larger figure, and she got on the outs with him. In an effort to apologize, he dressed as a large puppy and sang his signature song, Puppy Love. It was obviously rude of him to make the joke, but the result is great, and I can’t say that I didn’t have a crush on him twenty years too late during this era.

M: Thanks to Rosie, I saw Donny Osmond appear at the Hill Cumorah pageant, a big Mormon to-do. Readers? I am not Mormon.

Her BFFs Jackie and Jeanie

M: When we watched Rosie as tweens, we imagined (a) that we’d be friends with our childhood besties forever and (b) if we ever got famous, they were coming with us. That’s why we loved how Rosie would bring her buddies onto her show and chat about them in the same way one might name-drop a celebrity. 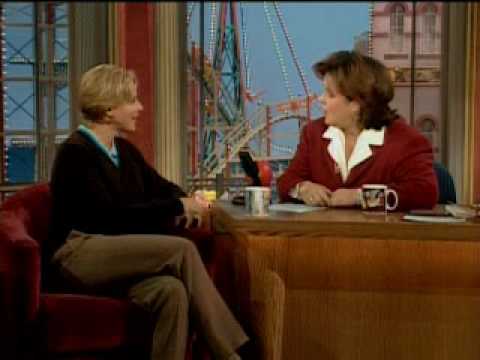 M: OK. It was a 90s thing. But the fact remains that the woman loved a pantsuit with big lapels. Do you remember those giant brooches that moms and teachers would wear back then? You NEEDED those lapels.

M: Can you blame her?

T: Is that a card deck labelled “Activity Zone!”??? Because I need it.

M: Rosie’s desk had a slide-out footrest for short guests. She LOVED offering it to people, and it came in handy because a lot of Rosie’s guests were children or, for whatever reason, small adults.

When people did her desk

T: I could be wrong, but I’m pretty sure Rosie had a contest in which different people would design her desk and it lasted maybe a week or two. Here’s one featuring a real habitrail with real hamsters. Other themes included Star Wars, Hot Wheels and an entire desk made out of Legos. As a 12 year old, this desk was #goals.

5 thoughts on “We’ll Never Love Anything As Much As Rosie O’Donnell Loved….”