In all my Gilmore Girls hysteria I missed the television event I never knew I didn’t need: the 2016, YTV, Martin Sheen-ified remake of L.M. Montgomery’s Anne of Green Gables, which aired on PBS Thanksgiving night. Ahem, American Thanksgiving night. While I first fell in love with the world of Avonlea through Lucy Maud Montgomery’s Anne of Green Gables books, I also have a real fondness for the One True Film Adaptation: the 1985 CBC Miniseries directed by Kevin Sullivan and starring Megan Follows, Richard Farnsworth and Colleen Dewhurst. We’ve written about Anne in our takedown of Marilla Cuthbert as a creepy church hag  and in our mixed-feelings analysis of dream man Gilbert Blythe. Now it’s time to turn our attention to the newest adaptation of Anne of Green Gables, which I didn’t really need but which was perfectly fine, I suppose.

Personally, I’d argue that any time Anne of Green Gables is made it should star Megan Follows. I understand that she is like 40 years old (EDIT: Forty-EIGHT years old?!?! Which isn’t old, except I see her as a perpetual teen). However, in the 1985 Anne of Green Gables she wasn’t exactly 11 anyway, so may as well keep going with it.

Question: Why is Matthew so bumbling? 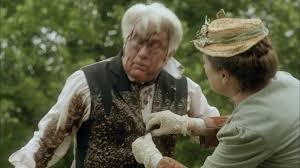 Matthew was always quiet and a bit awkward, but I thought it was more in the painfully shy way instead of in a clumsy-lady-in-a-romcom way.

Comment: The casting of Matthew is almost aggressively American.

Concern: That is the worst red hair I’ve ever seen.

Anne. “Nobody with hair that awful could ever be perfectly happy” because it is a horrendous dye job. I’ll pull out my redhead card (it’s actually an appointment reminder from my dermatologist because red hair is a curse indeed) and say that in the first place, only certain skin and eye tones work with red hair. This adorable actress (surely cast because she was the best for the role; she does a great job) just doesn’t have redhead-compatible undertones. Add to that a weird, improbable shade of red dye and the worst Halloween costume-level painted freckles I have seen in my life, and it just does not work at all.

Comment: All of the kids are the right age.

As an adult I can watch the One True Anne of Green Gables and pretend all those kids look 12-13 years old. But as a kid who was the same age as Anne I remember being so confused as to why they all looked 18. Note: it’s because they were all 18. It was especially jarring in the scenes where they’d mention Anne being scrawny and 11-year-old me was like “for real, she looks post-pubescent.” The casting made sense because the 1985 Anne of Green Gables combined Anne of Green Gables and Anne of Avonlea, and this one is Anne of Green Gables only. It’s very different seeing Anne look like an actual little girl. She comes across as more precocious for her age and less like a weirdo quirky teenager. All in all, not a bad move.

Question: Why is the new White Way of Delight so bad? THIS is how it should be.

Comment: Puffed sleeves are proof that trends may change, but terrible tween fads are a constant.

Does anyone remember reading about Anne’s puffed sleeves and imagining something positively dreamy, only to see those big ugly ’80s-looking things? Proof that fads come and go, but they’re almost always stupid.

Marilla speaking truth to how I’d feel about Anne as an adult who had to deal with her – even though I wouldn’t say it.

I mean, the kid is adorable.

New Anne (Ella Ballentine) is a little less dreamy and out of it, a little more introspective and quick-witted, but in a way that is supported by the way Anne is written in the books. I’m so relieved they don’t have her trying to do a Megan Follows impression. Between the different take on Anne and the different ages of the actors, this is at least enough different from the old version to make it worth a watch.

Question: Why is Rachel Lynde so awful?

I’d think that Rachel was improbably bad, but then I remember that adults DID make comments about my red hair and freckles when I was a kid. However, I am still baffled as to why Rachel’s so terrible. Sure, she doesn’t have kids, but neither do I and I know enough not to call them ugly.

We see it from afar, with Anne gesticulating dramatically and Rachel looking bemused. Ha.

Comment: Marilla chuckling to herself over Anne closing her prayer with “et cetera, et cetera.”

I liked this moment showing why Marilla’s keeping this kid around – Anne drives her crazy, but Marilla gets a kick out of her. Who wouldn’t?

Comment: The hair is better out of natural light.

Same with the freckles.

Question: Did this film even HAVE a colorist, or…? 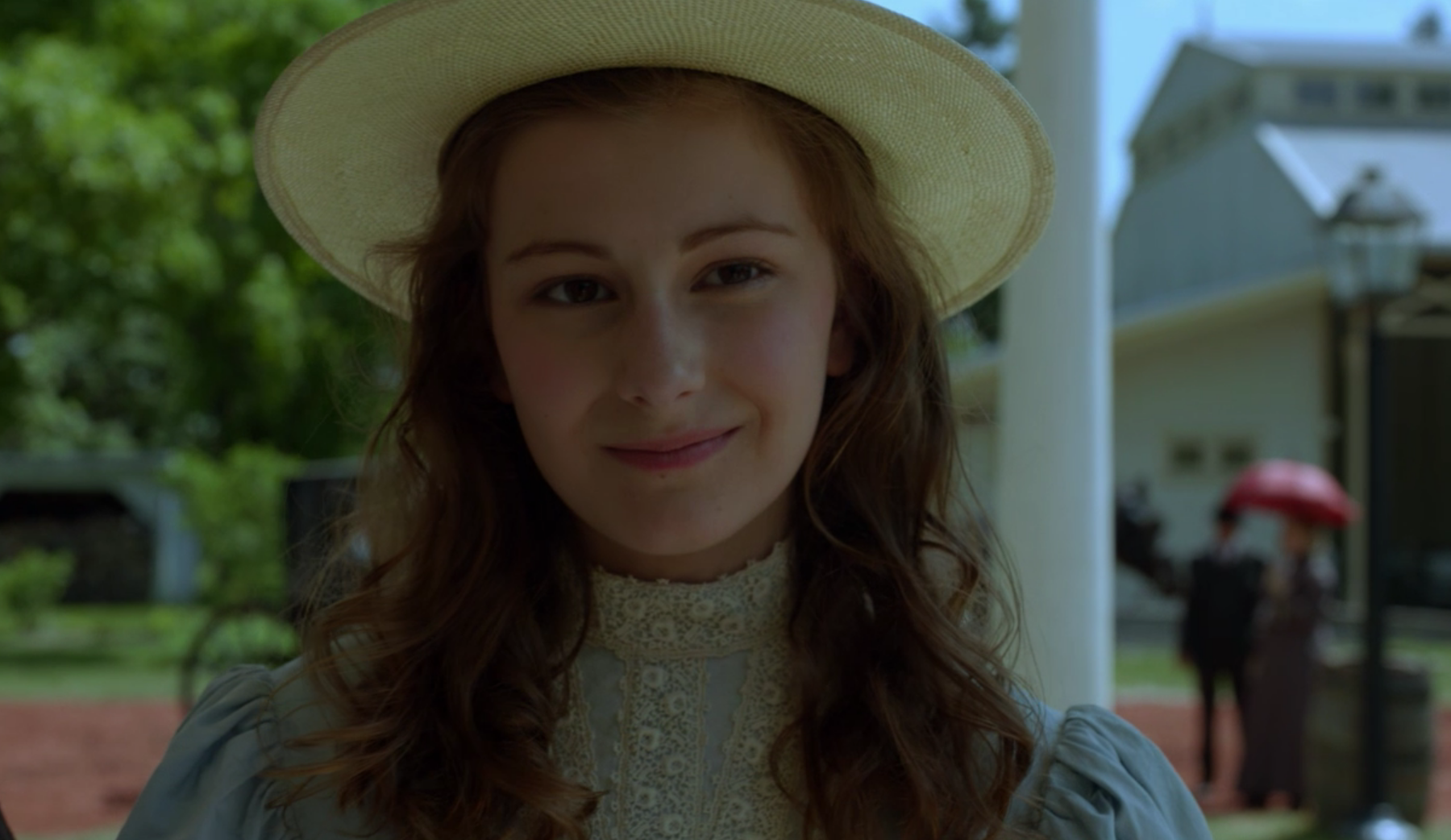 Diana has light brown hair with a slight tint of ginger, even though everyone knows Diana has black hair. In some cases a character’s description in a book isn’t important, but in Anne of Green Gables it mattered because (1) Anne’s hair was a major plot device and (2) Diana’s hair marked her as everything Anne wasn’t.

I always imagined Diana being much more calm, cool and together than Anne, but this actress (Julia Lalonde) plays Diana as a slightly awkward tween. I can totally see her getting drunk on raspberry cordial by accident. This less-smooth take on Diana works since she and Anne are both so imaginative – kindred spirits! – and because Diana’s so sheltered by her mother. Not to mention, the “Diana’s so cool and pretty” stuff was mostly coming from how Anne saw her because she absolutely had one of those tween friend-crushes where you just want someone to be BFFs with you.

To make up for the lack of black hair dye, this Diana has expressive dark brown eyes, which feels very Diana.

Concern: I never realized how much my concept of Gilbert was tied up in having a crush on Gilbert.

Gilbert was played by college-age dreamboat Jonathan Crombie (RIP) in the 1985 version. which means both that he was one of the first leading men I remember having a crush on, and also that it didn’t feel weird to find him cute when I rewatched as an adult. New Gilbert is a baby. I mean, a small child. It drives home how jerk-era Gilbert from the books was a little kid, which is nice, but it still makes me feel like a filthy old lady to see Gilbert as a child.

It’s still one of the best scenes in this or any version of Anne of Green Gables.

Props to Ella(/Anne) for her delivery of “what’s that?” when Diana says her mother has hives – both girls are talking in fake fancy accents and she totally drops it. Cute.

Woozy Diana and confused Anne – both so good!

Comment: We all get creep vibes from Mr. Phillips, right?

In the books, Mr. Phillips courts teen student Prissy Andrews, but even if he hadn’t he’s just creep vibes all around. I’m happy they had this actor portray Mr. Phillips as a sketchy mean teacher, too.

Comment: The scene where Anne saves Diana’s sister is so much more touching as an adult.

It was always clear Anne had a lot of child know-how because she was basically an indentured servant for giant families, but now it’s even more touching because you see how everyone thinks Anne’s silly because she’s so imaginative, but really that’s an escape – she’s an incredibly intelligent and competent girl who never got to be a kid before.

Also, Mrs. Barry is kind of a B for only forgiving Anne after she saves her kid.

Anne: Why are you standing there?

Gilbert: For your safety.

Concern: Marilla would never try to return a kid she bought THAT LATE

Marilla did buy a kid for chores and then try to return her. We don’t let her off the hook for it. However, this adaptation sneaks in a moment of dramatic tension by having Marilla almost return Anne at the close of the film after she’s been established in Avonlea for, like, a year or something. Then Marilla decides to keep Anne thanks to VOICE OF REASON RACHEL LYNDE. Lots to unpack here. I understand why someone adapting Anne of Green Gables would feel that there needs to be a point of conflict at the conclusion. However, Anne of Green Gables, like many children’s classics – Little Women comes to mind – is a series of episodes rather than one large problem to be solved. The story develops over the course of several novels, and there is real conflict in whether Anne will get to stay, if she will remain friends with Diana, make peace with Gilbert, and later on in whether she will earn top marks, go away to school, fulfill her career goals and finally make up her mind about Gilbert. The Anne books, like childhood itself, aren’t a buildup to one stunning turning point. They are a series of events that inch a person closer and closer to the adult they will become.