Welcome back to Pop Culture Blind Spot, where we examine beloved films and tv shows that we definitely should have seen by now. Up today: Hello Dolly, a movie musical totally missed by this person who loves movie musicals.

What I think I know about Hello Dolly: It’s from the 1950s but set in that time all mid-century musicals were – approximately 1908, or whenever Main Street Disney is supposed to be. It’s about Barbra Streisand… doing vaudeville, maybe. The only thing I know is the song Hello Dolly, and by that I mean the part of the song where they say Hello Dolly, well hello Dolly.

Let’s see how wrong I am!

Right out the gate, this was made in 1969, making me nearly twenty years off in release date. I guess I should have been tipped off by the fact that Babs would have been a child in the ’50s.

But it IS from the era I was thinking of-ish: New York City, 1890! I’m already into it by the Ken Burns-y fade-in they do from a still photo of a 1908 street scene to live motion.

The continued opening shots showing people’s feet as they skip, hopscotch and trip-trap about are fantastic. This leads me to look up who directed this… Gene Kelly?!? WOAH. I had no idea he directed, too. Talk about a quintuple threat.

Ambrose (Tommy Tune), doing a nerd voice, wants to marry scroogey rich Horace Vandergelder’s niece Ermengarde. I assume Ermengarde was meant as a nerd name even in the 60s. Ermengarde has a great fuchsia hairbow and a nice complexion.

Horace: You are a seven-foot-tall nincompoop!

Horace: All the facts about you are insults!

Horace (Walter Matthau!) ‘s plan is to get married.  He illustrates that through a cringey song about how it “takes a woman” to do thinks like dump ashes. He describes women as both “fragile” and “frail” but also capable of doing the garbage work he doesn’t want to do like “clean out the drain in the sink”,”washing and bluing and shoeing the mare” and “cleaning the stable.”

Okay, here’s what Horace is. He is to husbands as Marilla Cuthbert is to mothers: he’s more or less trying to buy another human for chores. It sounds like what Horace needs is a maid or a handyman. I assume that in 1969, as in 2017, this song read as a joke about how horrible Horace, the two male clerks and the chorus of singing men behind him are. Men in general I guess.

Apparently the frail sturdy chorewoman Horace has in mind is Irene in New York. Dolly sing-explains that SHE wants to be Horace’s wife-maid-stableboy.

Barnaby and Cornelius, the nerdy clerks, are going to New York and aren’t coming back until “they’ve each kissed a girl.” Barnaby is 19 and a half to Cornelius’s 28 and 3/4 so “for me it’s not so urgent.” I should probably mention that they’re in Yonkers, which I guess looked like the Old West in 1890, so it’s not much of a commute. Dolly sends them off to meet that hussy Irene and her shopgirl. I see what you’re doing, Doll. About to close down the saloon early. Or feed shop. Grainery? General store.

Put On Your Sunday Clothes is the best number so far. “Put on your Sunday clothes when you feel down and out,” sing a bunch of Newsies from a time when ‘Sunday clothes’ meant anything. Ladies dance with parasols, a film industry requirement for all technicolor musicals made before 1970. A family in all white emerges from a Queen Anne-style house and for a second it’s like we’re in a Ragtime crossover. The ladies do a tiptoe move with their bustles that’s the late Victorian precursor to twerking. People talk-sing and you can show that to any old folks incredulous about modern rap musicals. Everyone departs on a train, another one of those midcentury musical requirements.

We meet Irene and her galpal Minnie mid-scene with some quality chuffa:

Minnie: A banana a day keeps the doctor away.

Irene: You mean an apple a day.

Minnie:Who ever heard of a doctor slipping on an apple peel?

Established: shopgirl Minnie is an idiot and Irene’s used to it.

Irene Molloy (Marianne McAndrew) would be played by Kristen Wiig if this was made now.

Irene is so much cooler and smoother and better-looking than Cornelius and Barnaby, who is so dense he introduces himself as a hat, plus her shop is unnecessarily large and decorated in sophisticated grays. Minnie Fay is right about on the guys’ level though. 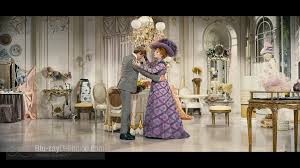 “Forgive me for saying this, but you should see Yonkers.” NEVER.

Everybody is doing that annoying trick where they mention the other person’s significant other to see if they have one. I always secretly like when guys do that, though, because it saves me the trouble about lying about a boyfriend to get them to stop talking. Horace is shocked that Cornelius comes into New York City. Again, from Yonkers. In 1890, when there were trains. Dolly talks Cornelius up,  and it’s funny (” Who took the horses out of Jenny Lind’s carriage and pulled her through the streets?”).

Horace is going to march in a parade with “the kind of people I can trust – 700 men.” I remain confused as to why he doesn’t just hire a chore boy.

Barnaby is the Niall Horan of this musical: affable, charming, boyish and underrated.

While searching for images of Danny Lockin I found this FASCINATING info about what happened to him after Hello Dolly – pic links to article. Woah.

Not to make too much of Irene’s giant hat shop but it’s so big you can swing a lady in a hoop skirt without hitting anything. Which they do. If I had that kind of hat shop money I’d never get married.

Dolly has so much purple, including a little purse and a feather boa and a giant hat, that she’s like a purple muppet. She has some LONG acrylics as well, just like the Victorians did. They are her “getting back in the dating game” nails. She’s widowed. I thought Horace was talking about a metaphorical parade, but there’s actually a giant parade. Once again, it looks like Main Street Disney. Women are there too, including some suffragettes (another requirement of technicolor musicals) but Horace goes anyway. Babs sings about parades, which is one of her specialties.

Along with Niall Horan, Barnaby also has some Mark Hamill vibes.

Niall, Cornelius, Irene and Dumb Minnie sing about how elegant they are, a thing I think you’ll notice elegant people never do. Like how smart people don’t talk about being smart. They make a fun friend group and I would 100% watch a spinoff movie of Minnie, Mark Hamill and Cornelius bumbling about and Irene having to be the only adult in the situation.

Here’s what I appreciate about the costuming here: everyone is head-to-toe color coordinated like a 1980s bridesmaid. Dress, cape, hat, shoes all dyed to the exact same color. Babs changes into what I guess is the most uncomfy loungewear invented, a lacy tan corset top with a lacy tan jacket over it with some giant sleeves. It’s kinda Stevie Nicks-esque and I’m obsessed. Her hair is a smooth orange dome with a ponytail at the end. This is her casual hairstyle.

Best I could do

Don’t worry, there are dancing waiters in red tailcoats.

I wonder if Mock Turtle Soup struck people as funny in 1969 too, but I bet it did. Just the idea that turtle soup was so in demand but so rare that people had to fake it.

“If I tell you the truth, would you let me put my arm around your waist?” Weird bargain but OK.

“I’ve never touched a woman before.” YOU DON’T SAY, CORNELIUS.

Don’t Barnaby and Cornelius sound like what a hipster couple would name their sons?

Dolly is BACK wearing a very gold beaded dress and a feather headpiece, which is what prompts everyone to sing Hello Dolly.

LOUIS ARMSTRONG IS IN THIS. I know everyone else probably knows that but I didn’t. He’s absurdly charismatic.

I kind of feel like the first hour, hour fifteen were jam-packed and then we’ve been marking time in this restaurant ever since.

There is a whole turkey on Dolly and Horace’s two-top table. Is this how rich people eat?

Cornelius dances with a fan like an idiot. On one hand, Irene can do better. On the other, they’re both having fun and he doesn’t take himself too seriously like ol’ Horace.

Horace almost fires Cornelius and Barnaby for being in New York even though I’m fairly certain he doesn’t own them like he will the chore-wife he wants to buy.

Falling in love “only takes a moment” but the song about it lasts seven.

Back in Yonkers, Barnes and Cornes quit. Cornelius is becoming a new Horace, and Barnaby is becoming the new Cornelius. Dolly and Horace are getting married. ALL the people you thought would get married in the first ten minutes will get married, but my, wasn’t it a fun journey to get there?

I just wish these men would stop singing about how it takes a ‘fragile’ woman to do chores, is all.

Bottom line: I see what the fuss was about – not so much the songs themselves (not too many showstoppers) but the character of Dolly Levi and Barbra Streisand’s performance, plus the supporting cast and throwback sets and costumes. This was delightful and a break from real life, just like a musical should be.