We live in an era in which podcasting is in a golden age – ever since Serial, it seems like the cool thing to do now is either start a podcast (LOL I HAVE ONE LISTEN TO IT PLS) or have a never ending queue of podcasts you listen to on the regular. Today, I’m sharing one of my favorite pods that get top priority in my app – here’s the DL on literal chart topper Pod Save America.

What’s It All About

A no-bullshit conversation about politics. This is a podcast for people not yet ready to give up or go insane.

If you’re a person who is frustrated with the way this current administration is handling the state of our nation, this podcast is for you. Twice a week, these White House alums discuss U.S. politics through a progressive, liberal lens, so if you have a problem with that, this podcast is probably not for you.

Jon Favreau (no, not that one) is the lead host/moderator of the pod. He was the Director of Speechwriting during President Obama’s first term, and worked for Barry dating back to his days in the Senate. Unrelatedly, he dated Rashida Jones back in the day, and that’s how I first heard of him. The hot Obama speechwriter who once dated Rashida Jones.

Jon Lovett also worked alongside Favreau as a speechwriter during the Obama era, and prior to that, wrote for John Kerry and Hillary Clinton. After he left the White House, he pursued a career as a screenwriter, and together with Josh Gad and Jason Winer, they created and wrote short-lived sitcom 1600 Penn, which was truly the best show you weren’t watching and got cancelled way before it should have been. He also wrote and served as an advisor on The Newsroom, and just kicked off his own spin-off podcast, Lovett or Leave It.

Tommy Vietor worked with Obama since the Senate, and in the White House, Tommy was his spokesperson, as well as the spokesperson for the U.S. National Security Council. Like Lovett, he also has a spin-off pod called Pod Save the World, which focuses on global issues and policymaking decisions.

Dan Pfeiffer was a Senior Advisor to Obama for Strategy and Communications, rounding out this fraternity of Obama bros. Dan also worked on Gore’s presidential campaign, as well as various senators throughout the years.

Pod Save America is actually the result of the foursome’s very successful podcast, Keepin’ it 1600, which focused on the 2016 presidential election. It was praised as one of the best podcasts of 2016, and garnered a huge fan following. Because of their success, Favs, Lovett and Tommy started their own podcast network, Crooked Media, and Pod Save America became the first podcast under their new network. Needless to say, they’re not amateur podcasters.

And They’re Not Political N00bs, Either

Because these guys have had years of experience in Washington, it’s not like they’re randos who are just giving their POVs on the week’s current events after only having read one article on Vox.com. The know their shit. In fact, it’s what makes their podcast a bit better than the rest. They’re experts who are giving us insider information on how an administration worked, how it should work, and what the current one is doing “wrong”. As someone who follows politics, but not enough to know all the intricacies of it, it’s extremely informative, but not condescending or pretentious. They’re also funny, so don’t expect a straight up news podcast, either.

The Guests Are No Joke 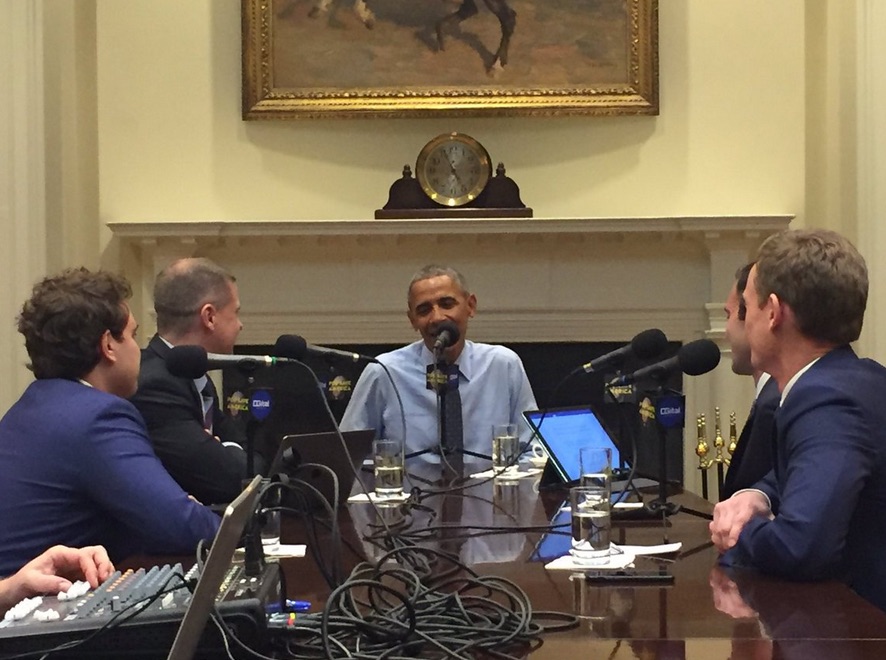 Keepin’ It 1600 had been on my queue for months, but I just never got around to it. So when Barack Obama sat down for his final interview as president with these guys, I obviously had to tune in. BTW, that ep is a good starting point if you need a gateway drug! Every episode features a special guest in the second half (after the hosts talk about the overall current events in the first half), and every single person so far has been impressive and knowledgeable in their area of expertise. For example, when DT first laid down a whole bunch of Executive Orders (like the travel ban), former White House lawyer Danielle Gray came on the pod to discuss the legalities of his EOs, while Obama’s former Deputy Chief of Staff and Health Care Czar Nancy-Ann DeParle discussed Trumpcare. Other guests include former chief strategist David Axelrod, another chief speechwriter, Cody Keenan, and A Closer Look’s Seth Meyers.

Sure you can listen to the podcast and feel like you’re helping to fight the cause. And you are, just by learning about what’s happening in the WH shitshow, but obviously there’s more work to be done. The hosts of the pod make it a point to share resources and encourage listeners to be active in politics and local government, whether it be which Congressman/woman to call for the Issue of the Week, or when to attend town halls to give your reps a piece of your mind. They have a list of resources on their website but you should probably just listen to the pod to get all the details.