Baseball and film go together like, well, peanuts and cracker jacks. The oldest baseball comedy I could track down, Baseball Madness, was released in 1917, so the genre is almost 100 years old. As recently as 2014, Million Dollar Arm and 42 proved that the baseball film isn’t going anywhere. Still, I’d argue that the baseball movie was especially hot during the late 80s and early 90s. Some of these films recycled plot points and key scenes, but they’re still the best way to begin the most wonderful time of the year: MLB season.

Catch Phrase: This speech that I hate:

(I forgot how much I hated this speech but I do. I hate it.)

Key points: One of the only baseball rom-coms on this list (or in film, to be honest). Kevin Costner (Crash) mentors pitcher Tim Robbins (Nuke). Susan Sarandon (Annie) loves them both. Basically Annie and Crash both “coach” Nuke and in the process they form this weird enmeshed relationship. Who will she choose? (Spoiler: Crash, after Nuke makes it to the majors.) Also this is where I learned that baseball groupies exist.

Is Costner In It: Yes 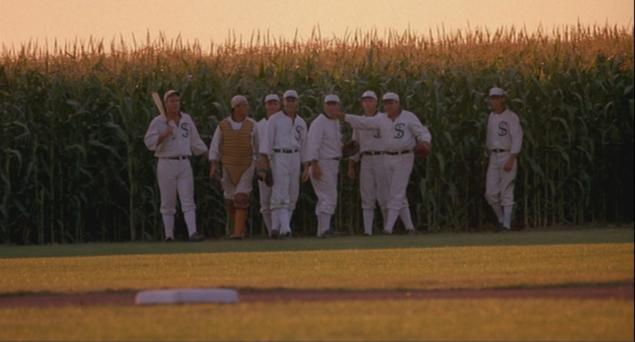 Key points: Kevin Costner again plays a baseball guy (Ray Kinsella) with a significant other named Annie (Amy Madigan). His dead father shows up and tells him to plow a baseball diamond into his cornfield, which he and his wife both think is a reasonable request. Then all these basbeball ghosts from 1919 keep showing up, which again leaves everybody more or less nonplussed. Okay, then it’s time for a road trip, and Ray meets an author and they see ghost stats from the 1920s on a Fenway scoreboard. Spooooky. Except not, because again, nobody is really disturbed by any of this. Right. Well, they meet more baseball ghosts, and then they go back to the farm, and Ray’s dead father comes to play catch. Ray’s daughter Karin chokes on a hotdog, because this is baseball, and a baseball ghost named Moonlight saves her, then walks off into the corn. They all play baseball and people come to the games. This summary has been provided by me watching this movie on cable a lot when I was under the age of 8, and then not seeing it for the past two decades.

It sounds made up but it isn’t: a young Matt Damon and Ben Affleck were extras at Fenway.

James Stewart was offered the role of Moonlight Graham.

A lot of the baseball ghosts were from the 1919 Black Sox scandal.

Is Costner In It: Yes

Key points: A showgirl inherits the Cleveland Indians, and tries to trigger an escape clause to move the team to Miami. To do that she needs low attendance, so she hires a ragtag team of really old or really bad baseball players. I think if you’ve ever seen a movie you know where this is going: they pull it together and win. Plus, they beat the Yankees, which as a Mets/ Red Sox blog we really enjoyed.

A League Of Their Own

Key points: During WWII, with baseball-aged men fighting the war oversees, the All-American Girls League is formed. Among the players: sisters Kit and Dottie, dancer Mae, Southern Belle Ellen Sue, and poor frumpy Marla Hooch. Manager Jimmy Dugan is a total jerk and he’s really mean, but the players are all fantastic and Jimmy can STFU. Kit and Dottie have a Venus and Serena-style sibling faceoff. Then it’s 1988 and the players are all old ladies, and they sing their baseball song, and I cry every single time.

Catch Phrase: So many! Just a few:

Key points: If you grew up in the 90s, there’s an excellent chance you watched this dozens of times and still know when to turn away during the carnival scene. It’s a classic “gravelly voiced adult man narrates his nostalgic, sun-tinged childhood” story. Scotty Smalls moves to a new town and starts playing pickup baseball with the neighborhood kids. The sandlot where they play backs up to an old man’s house, which is guarded by a ferocious dog (the beast), so every time they hit a ball over it’s gone forever. Smalls hits his stepfather’s Babe Ruth ball over the fence, so he has to face up to The Beast. In the process he meets Mr. Myrtle, a Negro League player who gives Smalls a ball signed by all of the Yankees as a replacement.

Rookie Of The Year 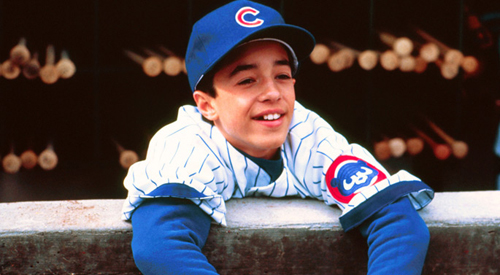 Key points: Henry, a little boy, breaks his arm and it is reset in such a way that he becomes a baseball phenom. He is recruited to the Chicago Cubs. Henry’s mom has a garbage boyfriend who tries to trade Henry to the Yankees, but it doesn’t pan out. Then Henry loses his magical broken arm pitch, and it’s back to Little League – but the Cubs did the World Series thanks to him.

Angels In The Outfield

Key points: It’s really hard to tell this, Rookie of the Year, and Little Big League apart if you haven’t seen them for 20 years. But this one stars baby Joseph Gordon-Levitt as Roger, a foster kid whose dad tells him they’ll be a family again “when the Angels win the pennant.” So Roger starts praying about it, and THEN Roger and his boy J.P. watch a game and see… well, it’s in the title. They see angels. In the outfield. Roger becomes a kind of good luck charm/consultant since he knows what the angels want. The Angels make it to the championship but I guess angels aren’t allowed in the, ahem, outfield during the postseason, so they have to win it on their own. Which they do. Then Roger and his boy JP get adopted by  the team manager, George, who unlike Roger’s dad isn’t the worst.

Key points: Rounding out the 1993-1994 “baseball would be even greater if run by little boys” series, Little Big League is about a boy named Billy who has a single mom (so many single moms in baseball movies?). Billy’s grandpa dies and Billy inherits the Minnesota Twins. So Billy has some run-ins with the grownups in the franchise who are just trying to do their jobs, and names himself manager, since he’s a 12 year old white boy (aka the living, breathing heart and soul of baseball according to early 90s films). As it turns out, little boys are bad at running baseball teams so Billy steps down after ruining things. But he’s one of those people who can ruin things and still be totally beloved, like Tim Riggins.