Here’s a myth about living in Los Angeles: I see celebrities all the time. I do see them occasionally, but it’s not like I see one every day. However, when I do see one, it’s usually in the oddest of places and involves an awkward exchange of words. Here are some that come to mind.

Okay, this is technically way before I lived here, but a good story nonetheless. I was visiting family here in 2003, and I got tickets to see American Idol. I went with my dad, who honestly, I don’t think he had any idea what was going on, but I also made a sign that said, ‘I came all the way from Rochester, NY to see Justin win’. Yeah. Justin Guarini. Anyways, during commercials, the audience warm up guy announced that Mario Lopez was in the audience. I naturally freaked out because if there is any TV series that encapsulates my youth, it’s Saved by the Bell. So I got the balls to go up to him (because other girls were doing the same thing too) and I asked him for his autograph on a piece of paper ripped from a small notebook of the gal behind me in line. There he was, AC Slater, flashing his smile and dimples at me. He asked me what my name was and I said, ‘Traci’. He said oh how do you spell that? And I was all ‘T-R-A-C-I’, but apparently said it really fast, because he looked confused and it literally said, “To Traici, Love Mario Lopez.” To make it worse, I told him how much I love SBTB and how I’ve seen every episode, to which he smiled again and I ran away like a little girl.

My friends and I were at Yogurtland, a popular self serve fro-yo place. We were sitting outside eating and I thought I spotted Talan from Laguna Beach go inside. I came up with a reason to get napkins just to see if it was in fact him. Turns out it wasn’t. Also turned out that the dispenser was out of napkins, and since I needed them anyways, I decided to go up to the cashier to ask for some. When I went up there, there was only one cashier, and I let her know that they were out of napkins. And then a line started forming and it took waayy too long and I started feeling guilty about just getting fake napkins. I said outloud, “You’d think they’d have more than one person working here, right?” Then a voice next to me said, “I know right?” Yeah, that person that responded to my offhand comment was Mindy Kaling. I ran away like a little girl.

Ironically at the same Yogurtland, but a different time, I saw Damien (Daniel Franzese) with some girl. I think I was staring at him for too long because we made eye contact and he looked at me with some concern. A year later I saw him handing out flyers for a theater during a Christmas open house.

I was picking up food I ordered from my favorite restaurant, Aroma cafe. There’s a TV behind the registers that usually plays old timey movies, and the one that was playing that day was a really odd one that was super low-budge and featured some woman with a huge gold headdress. While I was waiting to pick up my food, the guy next to me said, what movie is this? The cashier said it’s called She. And without even thinking that I shouldn’t be part of the conversation, I said, ‘She? That’s the name of it? So weird.’ Then the guy next to me looked at me and nodded in agreement before saying something else, and I realized I made small talk with Napoleon Dynamite.

My friend Thom was visiting us in LA, and my roommate Meghan and I took him to one of the greatest cupcake places/tourist spots in the city – Sprinkles. This place is so popular that there is always a line out the door at the Beverly Hills location, but it’s so worth it. While waiting in line, a couple girls got out of a car and came up to us frantically saying, ‘We need a guy to sing happy birthday to!’ and I was like ‘Holy crap, that’s Whitney from The Hills! Slash it’s actually Thom’s birthday!!’ I immediately pointed to Thom, but he was having none of it and she’s like do you want to do it? We’re in a scavenger hunt and I need to sing happy birthday to a guy.’ Thom said no and she moved on. Ugh come on!

At the stationery store I used to work at, a lot of celebs would come in looking for assistance, and I would have to act cool. I’d say the biggest star to come in was Tim Allen. At the time, I was by myself, and on the phone with a customer. Then I heard a man say, ‘excuse me’ and I turned around and it was Tim the toolman Taylor. He started asking me about an ink refill for his pen, and I promptly came up with an excuse to call the customer on the phone back. We didn’t have what he wanted, but he and his daughter ended up buying some stuff anyways. When he was checking out he said, “I’ll Paper your Goose.” The name of our store was Paper Goose. 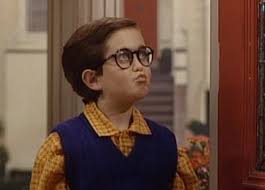 L.A. isn’t really known for its walkability. Everyone here drives. So often when there’s someone walking across the street illegally, I turn on the road rage. Last month, this very thing happened. I was coming to a stop in traffic when this guy just runs across the street to his car. I thought he looked familiar, like he went to my college or something because he looked super hipster and that’s my natural train of thought in LA – Emerson or celebrity? And thanks to Molly’s previous Full House where are they now post, I realized it was the guy who played Duck Lips on Full House who illegally crossed the street in front of my car. How rude.