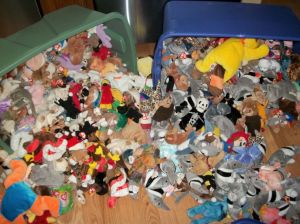 You know them, you had them, you hated them – Beanie Babies were a craze in the 90s, selling out in Hallmark and toys stores around the world in hopes that one day, they would be a gold mine. At least that’s what the original point of them was. Today, no one really cares about them anymore.

Ironically last month, Ty Warner, the creator of the 90s craze of stuffed animals, was charged with – dun dun dunnnnn – tax evasion. He allegedly kept $93 million in a secret offshore account at the United Bank of Switzerland (because, neutrality?) between 1996 and 2002, at the height of Beanie Baby popularity. In 2002, he failed to pay upwards of $1.2 million owed on the $3.1 million in income made through investments in the Swiss account. The guy has to pay more than $53 million in civil penalties and could also be in the clinker for a max of five years.

Welp. Looks like the Beanie Babies creator isn’t a billionaire like he thought he would be. And neither are the owners of hundreds of BB who had hoped they would be worth a fortune in the future. Now people are just trying to get rid of the damn things that are taking up too much space in their kids’ rooms. Mama just wants a new home gym, amirite ladies?

I am totally guilty of having a collection of these cute critters, and even had one of those books that listed all the available beanies, and I would check them off as I added them to my plethora of furry friends. I have no idea where they are now or what my mother has done with them, but I do know that I cannot be the only one who has a handful of these stored in my parents’ house.

In fact, there are people who are willing to let go of these items that still, one day, could be worth thousands of dollars (jk, these will never be worth anything frreal). Here are a few collectibles I found on eBay. Just try and guess how much these folks are selling them for. Whether it be too high or too low, either way, these things are too ridiculous for anyone to purchase at all.

(highlight the space between the arrows or click on the pic for the actual price!)

“This is very desirable & sought after TY Beanie Baby. It has a 3rd Gen hang tag & a 2nd Gen tush tag. It is Mint with 99% mint hang tag. ” A lot of lingo to say ‘good condition’

Is it me, or is this bear squatting and crossing his legs??

AKA the Irish bear.  Apparently she’s extremely rare. Complete with Guiness in hand (not really, but they should)

No parent should ever purchase this for their child. What even IS this monstrosity??

Because apparently, they made an international collection. and weren’t even clever about it. ‘Let’s just print a pattern of their flag on it!’, the now jobless designers of Beanie Babies, circa 1998

And now it’s time to guess which one of these RARE Princess Diana bears costs more than the other!

For fuck’s sake they are the EXACT same thing.