I’ll be the first to admit it – I often forget that the characters I see in the TV and movie screens are not real. My Tumblr is even titled “Reality has no place in our world” (shameless plug) because the line between fiction and non is… well, sometimes non-existent. So when I hear things like “Ryan Gosling wanted Rachel McAdams to be kicked off The Notebook set“, I refuse to believe it’s real because it’s obviously marring the illusion of their perfect love. Unrelatedly, if you know of any good therapists, I’d love their number.

But obviously if you’ve got a fairly good grip on reality, you know these kinds of bust-ups happen all the time. I mean, when actors with big personalities are forced to work with each other, it’s bound to happen eventually. So to ruin your fantasy world where every ship is safely sailing off to True Love land, here’s just a few onscreen pairings who absolutely could not stand working with each other.

So more about this. Apparently this story has been floating around for a while, but it was only until recently when the movie’s director Nick Cassavetes said in an interview that Ryan wanted Rachel booted from the set of their epic movie. Apparently Rachel and Ryan weren’t getting along that particular day of filming so Ryan was all, ‘I’m over it. Make her leave and gimme another actress to work with’ (not verbatim). And Nick was all, ‘Um, calm down bruh’ and Ryan started yelling at one of the producers and eventually came back to work opposite Rachel. Yikes. Well, it was still fun while it lasted.

Guys, when I tell you that finding out about this ruined my entire Luke/Lorelai ship, I’m not kidding. To this day, I still think that they are one of the greatest couples to ever exist on TV, but apparently, their offscreen relationship wasn’t quite as friendly. Towards the end of the series, Lauren hinted in an interview with TV Guide that she wasn’t BFF with Scott. That sound you hear is a million L/L fans throwing coffee mugs at the wall and making Christopher voodoo dolls.

TVG: So, how is your relationship with Scott?

Graham: It’s fine. I think these characters have a great chemistry and that does mirror our chemistry as people. We’re not intimates. We talk kind of how we talk [on the show]. We work well together.

TVG: But you’re not best friends.
Graham: No. It’s a very happy set. It’s a very functioning, working set, and I think some of that is helped by us having a little bit of a life outside. But I’m here an average of 50 hours a week, so there isn’t a lot of socializing for any of us.

Honestly, I put this tidbit in the part of my brain that suppresses bad memories, along with the time I refused to go in the deep end during swim classes and season two of Friday Night Lights. I watch at least part of Gilmore Girls about 5 days a week (thanks ABC Family reuruns) and just knowing that Luke and Lorelai’s ~*TrUe LoVe*~ isn’t real is too much for me to handle. 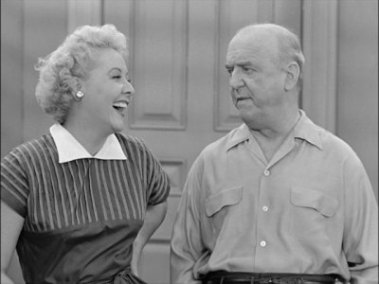 If two actors dated or hated each other back in the day, there would be no way for fans to know unless the stars decided to make their relationships public themselves. Today, we live in a world where people track who follows who on Twitter (omgz did you guys see that Demi totes unfollowed Selena on Twitter? No, but this is a real thing that happened). Again, things are much different than the days of yore. So color me surprised when I found out two fun facts about Lucy & Ricky’s favorite neighbors. 1) Fred, played by William Frawley, was 22 YEARS older that Vivian Vance, who played Ethel. According to classic TV myth, William apparently overheard Vivian complaining about having to work opposite someone who was old enough to be her father (fair). 2) Their purported feud lasted until William’s death in 1966, when Vivian allegedly heard of his passing when out to dinner – and promptly ordered champagne for everyone at her table.

I love Julia Roberts, but I have absolutely no idea what this movie is about. Didn’t even know she and Nick Nolte were in a movie together. But it’s probably for the best, seeing as how they totally hated each other whilst filming. Don’t know what caused these two 90s megastars (well, Julia’s still that) to have a rift in their relationship, but it got so bad that they had to film their scenes separately. Years later, Julia called Nick a “disgusting human being,” and his response was “It’s not nice to call someone ‘disgusting.’ But she’s not a nice person. Everyone knows that.” HAHA #YOUTRIED

Will Smith + Janet Hubert {The Fresh Prince of Bel Air}

Okay, so they’re not a couple, but I was so fascinated with this that I had to include it. Remember how there was one Aunt Viv in Bel Air and then the next season there was a completely different one that looked nothing like the original? Apparently it’s because she haaateedd Will Smith (the real one), calling him an “egomaniac”. She allegedly wanted more pay and more lines than the producers were willing to give her. Big Willie Style said she wanted it to be the “Aunt Viv of Bel Air” show.