As a kid, your bedroom is an important place. It’s the only place that’s really YOURS – or maybe shared with one or two other people, but still. It’s a no-grownup zone, and though your parents probably made you clean it and set some parameters, you had a bit of free reign as far as decorating went. I seriously went with it – in fifth grade, when I got a new bedroom, I went antiquing to pick out the right accessories, and pored over catalogs for months until I found the right bedspread. Even now that I’m older, I love seeing character’s home spaces on tv. Like a child’s room, the way these people decorate their bedrooms – the place in their house that outsiders wouldn’t usually see – tells you a lot about their character. Plus, the set designers just make them look really, really cool. Until I was preparing this post, I didn’t realize that set decorator would probably be my dream job. Here are some of my favorites. 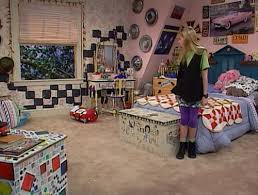 I know Carrie’s apartment is pretty unobtainable, but I love how her bedroom wasn’t TOO perfect. It was cozy, with bookshelves and a big comfy duvet. Even her radiator was cute. I remember reading an interview with the set decorator back when Sex and the City was still on, and she said that Carrie’s apartment was done in the shades of a bruise, since she was a little brokenhearted when she moved in. While that sounds grody, it’s actually a really pretty color scheme – soft gray, light green, and shades of blue and violet.

While the word “adorkable” could go away forever, this bedroom kind of IS adorably dorky. I love the bright teal wall contrasted with the brick, the clustered prints over the bed, and the fun printed bedspread. I could actually see Jess picking out all of these items. While Jess has some ditzy moments, she’s a teacher so we know she isn’t dumb. I’m happy to see some books in here to remind us of that.

Literally All of the Main Teens in Pretty Little Liars

I like how dark Aria’s room is, actually. Plus the gumwood gives it a craftsman vibe, and all I really want right now is to own a pre-1940s bungalow. My dream Arts and Crafts house is on the market now, about 10K too high and 4 months to early for me to buy it, so this is all a little fresh for me. Anyway.  The window seat is to die for. 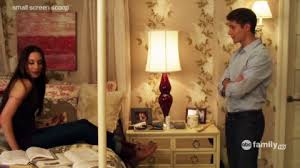 I’m usually not too into bedroom wallpaper, but this is so soft and pretty with the light furniture and white  french doors. I wish I could find a picture of the whole bedroom, because while the decor is pretty dainty, Spencer has a hardcore desk/bulletin board situation. So Type A!

I know at some point we’ll all be over gray as a neutral (we got there with taupe, after all), but Hanna’s bedroom is just so nice. I’m less jealous of the bedroom and more of the adjoining bathroom with a clawfoot tub.

I’ve always sort of wanted a white iron bed, so of course I love Emily’s bedroom. Plus an alcove AND a window seat!?! Between that and the cheerful, but not to bright, yellow and green color scheme, this is a winner.

This image is from http://chameleon-interiors.blogspot.com/2012/02/downton-abbey-putting-downton-to-bed.html, which has a great analysis of Downton Abbey bedrooms, if you’re so inclined.

Really, I love all of the bedrooms in Downton, but I especially like how, despite the heavy furniture and being in a stone castle, this feels breezy and airy. I love the fireplace, too – so cozy! I expect that this bedroom comes fully equipped with a lady whose job it is to brush and braid my hair before I go to sleep. It goes without saying that I picked Cora’s bedroom over Mary’s because a Turkish houseguest didn’t pass away in the bed.

Based on the above list, I think I have some criteria for a perfect bedroom. Sloped ceilings or an alcove, mixed prints, giant plush bedding, books, and some kind of windowseat or built-ins. When I was a kid, I loved kids’ rooms with multiple sets of bunkbeds or rows of beds. Like Madeline, except that I don’t want to live with a dozen French orphan children. Basically, if I end up in a tiny house with a ton of kids, I’ll be all set, decorating-wise. Otherwise, I’m screwed.

One thought on “TV Characters’ Bedrooms That I Covet”