Fashion is cyclical, and that cycle is about 20 years long. That’s why all those teen whippersnappers are dressed like 1994 Angela Chases and Corey Matthewses right now (although we know that the truth of 90s fashion was a little different). And that’s why styles from 5-10 years ago (think The O.C., Laguna Beach, Mean Girls) … well, they’re old enough to make you look out of date, but too recent pass as a vintage look.

As I am re-watching Veronica Mars, I’m finding myself really missing some of those mid-2000s styles. Others… not so much. We won’t be seeing a lot of these 2003 – 2009 fads again for a while, so consider this a requiem. A long time ago, we used to be friends…

Occasionally you hear that boot cuts are coming back for real this time, and maybe it’s true – denim follows different life spans than other fashion, multiple jean styles are acceptable at any time, and enough people resisted the skinny jean trend that boot cuts never really died. Though I like skinny jeans because it’s easier to find pairs that aren’t too baggy, boot cuts were frankly more flattering on more people. I usually stick with trouser jeans or straight leg when I don’t feel like wearing skinny jeans, but I’m seriously considering trawling e-bay for some 2007-vintage Seven For All Mankinds or Luckys. I’m old, I do what I want.

Some quality bootcuts, too.

If Veronica Mars makes you miss one thing, it’s cropped, fitted little corduroy jackets that were acceptable for indoor and outdoor wear and made great layers over shirts and hoodies alike. These are another thing I’d totally bring back without shame – I have some more blazer-y ones that I may or … may wear to the office sometimes.

These haven’t gone all the way out, but they’re nowhere near as ubiquitous as they were a while ago. Everyone’s trying to wear Tom Cruise in Risky Business frames these days, but we still need a few Tom Cruise from Top Guns.

To save you the trouble, I googled “when was Kardashian in back brace.” Never. The answer is never. This is a belt.

Fitted Tops That Weren’t Too Short Or Too Long

I blame skinny jeans for this. A lot of ladies wanted or needed to cover their butts in skinny jeans, and suddenly long tops came into fashion. Others wanted to balance fitted skinnies with looser tops, and billowy tunics were here. Then, those damn teens got their hands on fashion, and those awkwardly short yet wide shirts from the 90s came back. We never noticed it happening, but somehow it’s a lot harder to find a shirt that’s not skin-tight, but doesn’t billow. A top that isn’t butt-covering long or belly-baring short, but lands right at your hipbone. Suddenly every shopping trip turns you into freaking goldilocks, searching for the shirt that’s just right. It didn’t used to be like this.

Last place you’d see these tracksuits: an actual track. Can you imagine running in head-to-to velour?

I think J.Lo started this one, but America’s responsible for following. These were the outfit that said “I spent a lot of money to wear velour and look like I’m ill.” I never had a pair, but if I were the age I am now when these were popular, I would have probably cave. After a while you just like to be comfortable. If you wore one of these, you probably jazzed it up with some big ol’ hoop earrings.

At the time, I always used to think that these should read “I’m Not Funny — But My Shirt Is!” Clearly my attitude toward others hasn’t changed in the past decade. I’ll admit that some of these were sort of funny, in a bumper sticker, key chain, greeting card sort of way.

In 2005, it didn’t matter if you’d never been to Ed’s Bowl-A-Roll, Springville Prep Lacrosse Camp, or Buenos Aires. It was enough to had a shirt that said you had. It was so bad that if you’d wear a t-shirt from a vacation or activity, one of your friends would always ask “Now, is that real, or…?”

Man. Could we have thought of something less really expensive to have cycle in and out of fashion? It was these, then those Italian charm bracelets, then regular charm bracelets, and now finally Alex and Ani, which is at least cheap, finally. If you wear these with the right outfit and accessories it’s still doable.

Now, when they went missing, how many of these bad boys do you think actually got returned to Tiffany & Co.?

Che Guevara, For Some Reason

I don’t know. In 2007 that one kid who’s always talking about sustainable water supply and the Iraq occupation in your Developing World poli-sci class is definitely wearing a Che t-shirt. Or a Che pin. And definitely a Che jacket. It’s just a thing people were doing to let you know that they didn’t vote for George W. Bush, had serious feelings about organic foods, and were minoring in political science.

No beach required. There was a surfer thing going on that might have started in Blue Crush, and it manifested in Hawaiian flowers on shirts and these damn necklaces. They started off as an innocuous accessory, but after a while they were part of the Douchebag Accessory Trifecta, three items that all dirtbaggy mid-2000s dude-bros wore so that we could tell they were douchey without even having to talk to them. We’ll address the other two further down.

Jeans that were painted to look like your hips were so wide that your fabric was straining and puckering against them. Thanks, 2004. You really, really shouldn’t have.

In 2006, you didn’t need to worry that people wouldn’t be able to tell that your shirt was from Abercrombie, Hollister, Armani Exchange, or even Aeropostale. Your shirt did the talking for you.

Usually Von Dutch, always completely silly. This is our second item in the Douchebag Accessory Trifecta.

Baby AnnaSophia Robb is a paragon of 2004 couture.

I remember sitting in my college dorm in 2005, people-watching kids going into the dining hall across from our room, and wondering when all of the girls started dressing like swashbuckling pirates.

Here it is. The third Douchebag Accessory. You could even wear two popped collars at once if you were really, really awful.

“Nobody looks flyer than me in this silk-accented maroon blouse!” – My Imagination, c. 2006. [In case you’re wondering this is from a puppet show lampooning all of my friends, which a buddy and I wrote, directed, and starred in BECAUSE I’VE ALWAYS BEEN AT LEAST THIS COOL.]

Before it was normal to wear cute dresses or casual t-shirts out, every Friday and Saturday night (and Thursday… and Sunday), you’d straighten your hair, smudge on some liquid eyeliner, and change into one of your Going Out Tops. They were silky or lacy or otherwise fancy tops. At my college, at least, you’d then cover it up with a NorthFace fleece to walk across the frozen terrain.

In case you’re wondering, “going out top” was a clumsy phrase invented as a workaround so we didn’t have to say “blouse.”

Sports fashion for people who can’t play, or necessarily name, a single sport. These are neither dead, nor as very alive as they once were.

That One Kind Of Jeans Skirt 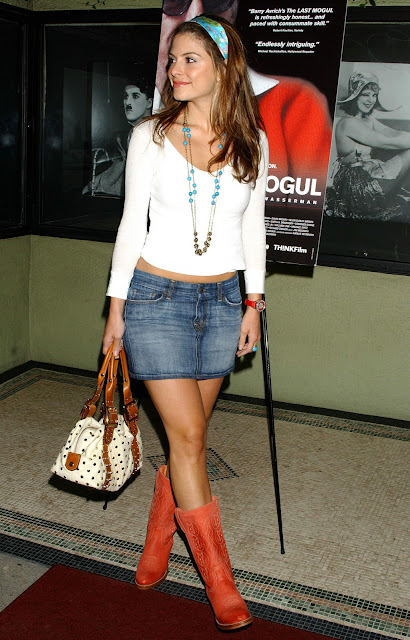 I basically wore this exact outfit.

Some kinds of denim skirt are still in – I was just wearing one. But remember that one kind of jeans skirt that everyone had? In warm weather, you’d wear it with your going out shirt.

I don’t know. It was like a flouncy ruffle that covered your ass. It sort of looked like a diaper cover. It seemed cute at the time.

What is this shirt, College Molly? You don’t even LIKE beaches that much. Too much sun exposure, too much sand.

Thanks to the aforementioned Blue Crush, along with The O.C. and Laguna Beach, teen beach bums were having a moment. Even if you lived nowhere near water, it’s a thing that was happening.

Could I BE wearing any more clothes?

Ah, the mid-2000s. When shirt sleeves of all lengths lived in harmony.

These weren’t those big, floppy 80s flashdance numbers. They were regular long-sleeved tops, but the shoulders were over the shoulder.

To explain: We were “hiking” and Traci instructed me to “look competent.” And our friend’s face is obscured so as not to throw her under the 2006 bus.

Your ab situation was on-point. You knew it. So did everyone else. Frankly, I’m glad these were popular in my college years so that my 18-21 year old abs will live on in the memory of all those I knew and loved.

What’s so funny, 2007 me? Is it that you still have the glow of youth? That you live in a house with a lime-green bar room? Or is it that your cardigan only reaches your ribs and you realize you look like an idiot?

Sometimes you’d wear it over your tight plain tank top.

I have curly hair, too. I understand. This hair cut was not always bad, but on boys with a certain kind of hair, it curled straight out at the bottom, forming, like, a hair-shelf. It looked stupid. You looked stupid.

On five-year-olds’ sundresses: Adorable. On adult ladies with boobs: really really weird. They made your boobs look tube-shaped and awful.