We’re  six episodes into the sixth season of Mad Men, and we’ve already been introduced to a bunch of new characters. But here’s the thing about the show: creator Matthew Weiner keeps everything so under wraps that even the guest stars are kept secret. Elisabeth Moss (Peggy) said in a recent interview that the people who come in to audition don’t even know exactly who they’ll be playing, who they’re acting with, or what the actual scene is. She said the writers change all the character names in the audition sides and they’ll make up a different story line, but it still contains the same type of drama that the real story line has. And then they shred everything.

So because of that, identifying guest stars on the show has become much of a game for me now. Like, ‘Guess which actor you know from that one thing because he/she is now playing a new client on Mad Men.’ It’s gotten to the point where every new character I see, I wrack my brain to figure out if they’re someone or not. 80% of the time it’s just some lucky unknown, and the remaining 20%, it turns out to be Alex Mack. It’s really messing with my flow of watching the show. What’s even more unnerving is that most of these people have been in 90s/2000s TV shows! Remember when Mr. Belding was on the Cool Whip episode last season, or even Clarissa’s Dad from Clarissa Explains it All who plays Pete’s father-in-law?

Here are some other notable 90s guest stars from this season… 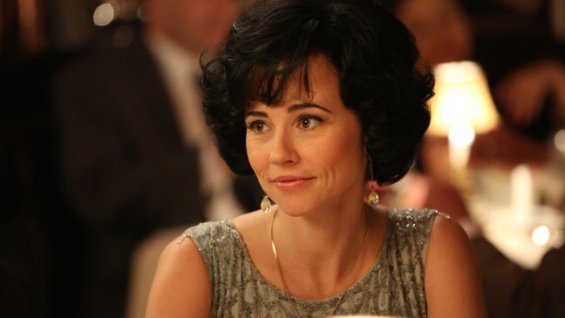 Sylvia Rosen, wife of the Doctor, mistress of Don. (ugh)

Jim Cutler, the head of accounts for Cutler, Gleason and Chaough

Jefferson D’Arcy in Married… With Children, Roger Phillips in Happy Days, and the ‘Patron Saint of Shark-Jumping’

Lloyd Diffy (Phil’s Dad) on Phil of the Future, MadTV, that one episode of The Office where he called out Michael for sleeping with Jan

Daisy the Stewardess that Roger hooks up with.

Brittany Aarons in DCom Stuck in the Suburbs (pictured here with SNL’s Taran Killam and Brenda Song), Jacey Jeffries in the iconic Lifetime original movie Mom at Sixteen, Is in Read It And Weep – aka forever a teenager to me